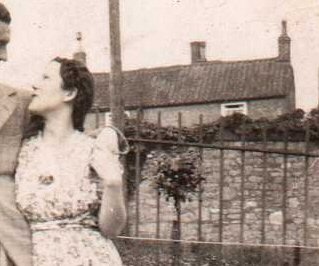 Unfortunately we don’t have a proper photograph of the house.  In the photo above taken from the front garden of 2 Market Site, it is possible to see the house over the far wall.  There was a building there in the 1840 Tithe Survey, and it shows that this property was part of Plot 323 which was described as a cottage and garden owned and occupied by Elizabeth Young.

We were lucky to have traced a document called an Abstract of Title which gives us quite a lot of information about the house, the owners and occupants.  The earliest owner of the house referred to in the Abstract was Henry Osborne.

Henry Osborne – Henry Osborne married on 27th April 1806.  His wife was a widow, Elizabeth Osborne, presumably the wife of one of Henry’s brothers although we haven’t been able to confirm this.  Henry and Elizabeth had two children: Mary born on 25th January 1807 and Elizabeth born on 12th April 1810.  Although the Abstract referred to above refers to Henry as a mariner, the baptism of Mary shows him as a” hallier” and he was a labourer when Elizabeth was baptised.

When Henry died in October 1810 the property was left to Elizabeth Osborne his widow and Mary Osborne and Elizabeth his only surviving children as co-heirs.  Henry’s wife, Elizabeth married again; this time to Charles Young.  Thus, she became Elizabeth Young, the person referred to in the Tithe Survey as owning and occupying the house.  The 1841 Census shows the house occupied by Charles Young an agricultural labourer aged 79, his wife, Elizabeth aged 75 and Mary Osborne a female servant aged 30.

Her two daughter then arranged to dispose of the property.  An indenture dated 29th March 1851 shows that Mary Osborne and her sister, Elizabeth Badman, and her husband Thomas Badman a labourer from Horfield in Bristol agreed to sell the property to Joseph Prewett for £28.  Mary was living in the cottage at the time of the sale.  She appears to have moved away because the house seems to be unoccupied at the time of the 1851 Census.

Joseph Prewett – having bought the property in 1851 it doesn’t appear that Joseph ever lived there.  He seemed to own several properties in the area and his main business was a stationer’s and newsagent’s which was located in the Toll House in the High Street.  Read more about Joseph Prewett

On 12th September 1900 the property at Bath Road was put up for sale at auction.  It was described as: ‘Valuable Freehold Property viz. a most desirable cottage and garden situate in Bulls Eye Lane in the town of Thornbury numbered 323 on the map annexed to the tithe apportionment for the Parish of Thornbury and now in the occupation of Police Constable Jones as a tenant thereof at the moderate rent of £9 per annum.  The Cottage is in good state of repair and is pleasantly situated adjoining the road leading to the baths’.

Caroline had died intestate and the property was inherited by her son, Alfred Harry Butler her eldest son from her previous marriage.  On 20th December 1912 Alfred who was a warehouseman living in Southampton at the time authorised Caroline’s administrators (James Bevan and William Harris Ponting) to sell 10 Bath Road to the District Council for £150.

We are curious about the fact that the 1905 and 1910 Rate Book show an extra house between those that later became numbers 8 and 10 Bath Road.  In these rate books the house was owned and occupied by Thomas Anstey. We don’t know any more about the house.  Read about Thomas Anstey

Thornbury Rural District Council – bought the property for £150 in 1912.  The 1925 Valuation List and 1926 Rate Book show that the Council continued to own the house.  We are not sure why they acquired it.

read about the occupants of this house
Toggle Sliding Bar Area