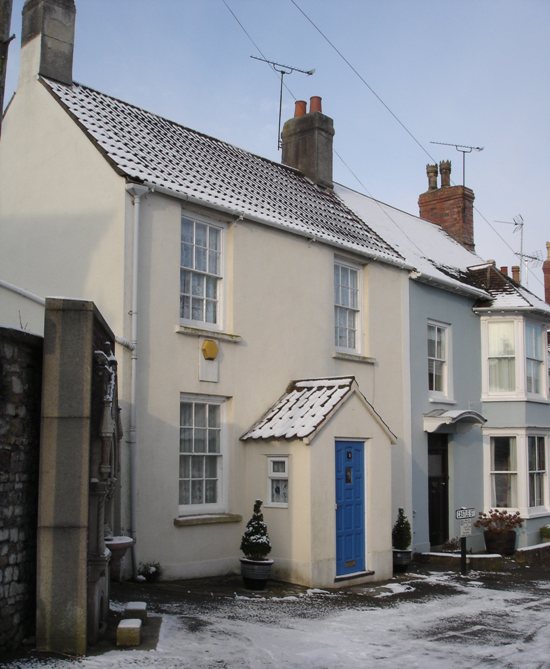 The earliest indication that we have at this time of who owned this house is in a Rent Roll of Borough Rents paid by freeholders to the Mayor of Thornbury.  This was drawn up between 1807 and 1810 and shows that the owner was called John Box.

An indenture of 1807 concerning the malt house which was at the bottom of Castle Street and on the other side of the road from number 1 Castle Street also mentions John Box.  It refers to the fact that the house next door to the malt house was one ‘that James Ely formerly inhabited and was now in the possession of John Box’.  This implies that for some time at least John Box owned or occupied another house much further down Castle Street.  We believe that this second property later became 30 Castle Street.  The Land Tax Records of 1809 that show John Box then became the tenant of what was later known as 24 Castle Street which he rented from Matthew Mills.

In 1812, according to an account paid by Thomas Rolph, John Box was a builder who employed a man and an apprentice.  He had completed a considerable amount of roofing, painting and plastering for Thomas Rolph for which he was paid £26 7s 6d.  The Land Tax Records of 1814 confirm that John was the owner and occupier of a house that appears to be the one we now know as 1 Castle Street.

John Box, then described as a widower, married Rebecca Frankland a spinster of Alveston on 23rd May 1818 in St Mary’s Church in Thornbury.

Although we believe that John and Rebecca Box may have moved to Bristol about 1820 John continued to appear in the Land Tax Records as a house owner for this property.  From 1819 to 1826 this house was said to be occupied by Richard Gwynn.  This is interesting because Richard Gwynn appears elsewhere as the owner of other properties and the occupier of a larger house than this one.  Richard may have been using one property for business purposes or subletting it.  Read more about Richard Gwynn

In 1827 and 1828 the house was occupied by Edward Pearce but still owned by John Box. The Old Bank with its iconic pump in front. Note a second pump outside the neighbouring 1 Castle Street

We have found that the Bristol Mercury in 1852 reported the death of Rebecca Box on January 15th 1852 aged 83 in Bristol.  The announcement described Rebecca as “the relict of John Box of Bristol.”  In 1841 Rebecca was living in a house in Cottage Street in St Augustine’s in Bristol where she appeared to be a lodger.  It seems likely that John Box lived in Bristol, although he continued to own property in Thornbury until his death and his widow even after that.  The Bristol Mercury of 1832 reported the death in St Augustine’s Bristol of John Box aged 59 on 25th April 1832.  Interestingly the announcement says that John Box died at the Plume of Feathers in Redcliffe Street.  We have looked at the website called “Bristol’s Lost Pubs“.  This says that John Box was the licensee of the Plume of Feathers in Redcliffe Street from 1820 to 1832.

John Ridd.  In the rate books from 1876 to 1890 the house was occupied by Thomas Latter but owned by John Ridd.  It would appear that John Ridd owned property in Castle Street (presumably this house) for some time before this date.  As early as 1867 the voters’ lists show John Ridd was entitled to vote in Thornbury because he owned property in Castle Street but his home address was given as Broham and Berry’s Farm, Martinhoe, Devon.

The 1871 census shows that John Ridd was a farmer in Martinhoe, which lies in North Devon near Lynmouth.  In 1871 he was 43 years old and farming 100 acres.  His wife Hannah was 49 and they had three sons living with them, John P. Ridd aged 11 and William and Thomas aged nine and five respectively.

George Henry Exell’s will dated March 1905 left his property in Castle Street (later to become number 1) to his son Frederick.  At that time it was occupied by Thomas Latter.  This is interesting in that the Rate Books of 1894 and 1899 show Frederick as the owner of the house.  Perhaps this is an indication of the fact that Frederick was managing the property even before he technically owned it.  The 1910 rate book confirms that the owner of the property was then Frederick Exell.

Frederick Exell was born in 1860.  In 1871 he was a school boy living with his parents on Vilner Farm in Thornbury.  By the 1881 census he was a second gardener living in the Bothy at Plympton St Mary in Devon.  In 1885 he married Sarah Ann Jordan in the Cheltenham district.  In the 1891 Census he was a gardener living at The Lodge in Miserden near Stroud with his wife Sarah and children Elizabeth aged five and George aged one.  The poor rate book of 1926 shows that Frederick Exell still owned this house and that it was occupied by William Rugman.  Frederick died in the Cheltenham district in 1935.

William Rugman.  The Rate Book of 1939 shows that the house was owned by William Rugman and so we must assume that he bought the property, presumably after Frederick Excell’s death.  The house at that time was occupied by Alice Hawkes.

In 1926 the Poor Rate Book shows that the house was occupied by William Rugman as a tenant of Frederick Exell.  It is possible that William had lived there for some time.  He was discharged from the army in September 1916 at Killinghall, Harrogate.  He had been enlisted in the 2/4th Northants Regiment.  His record says that he intended to return to Castle Street Thornbury.  He was discharged because he was “not likely to become an efficient soldier.”  He was discharged after only 41 days service.  The comments about him say that “During his short period of service he has been a sober, steady working man.  He drove a horse and cart for a grocer at Thornbury before enlistment and wishes to return to the same employment.”

William Rugman was born on 21st February 1891.  He married Edith Griffin in the Thornbury area 1917.

In 1931 William Rugman was in the Electoral Roll with Edith Winifred Rugman.

They had at least two daughters; Olive was born on 25th June 1920 and Joan was born on 5th April 1926.  Olive started at the Council Infants’ School in 1924 and left in 1927 to go to the Council Upper School which she left in 1934 to go to work.  Joan started school in 1930 but left that year.  The note says she left “until older.”  She returned to the Council School the following year and left in 1933.  She started in the Council Upper School but left in 1939 to go to Bristol.  The Electoral Rolls confirm that the Rugmans lived in Castle St in 1931 but by 1935 they had moved to the High Street.  The special register compiled in 1939 in preparation for the war shows William was a bricklayer born on 21st February 1891.  Edith was born on 18th April 1897 (amended to 1898).  The register suggests that William and Edith were probably living in part of the Nurses Houses at 58 High Street.

Alice Hawkes .    The special register compiled in 1939 in preparation for the war shows the house was next occupied by a single lady called Alice Hawkes who was born on 10th August 1885.  The register also indicates that the property was occupied by a single man called Wilfred Cox who was probably a lodger.  Wilfred was born on 20th May 1907 and he was a pork butcher and cold meat manufacturer.

Alice was baptised on 2nd September 1885 and she was the daughter of Christopher Hawkes a butler and his wife Elizabeth Ellen.  Alice lived with her family at The Hatch in Castle Street in the 1911 census and presumably she continued to live there until her father’s death in 1935.  The censuses do not indicate that Alice ever had a paid job.  By 1911 she was keeping the house for her widowed father and her sister who worked in a draper’s shop.

Although the Rate Book of 1939 shows that Alice was the occupant in a house owned by Frederick Exell it appears that she later bought this property.  The Rate Books of 1945 show that she was living in a house in Castle St that she owned.  We believe this to be number 1 Castle Street.  Alice continued to live in Castle Street until her death in 1957.  She died in the Bristol Royal Infirmary on 12th December and was buried in Thornbury on December 17th 1957 aged 72.  Her probate records shows that her estate at this time was valued at over £1768.

In 1958 this property was put up for sale together with 24 Castle Street.  It was described as a semi detached double fronted house with two sitting rooms and a kitchen on the ground floor and three bedrooms above, one with a dressing room.  The W.C. was in the garden with the shed and coal house.

Sadly we have not had access to the deeds of this property and cannot confirm any of the subsequent owners.  The only information we do have at this point is from the electoral rolls which show only the names of the occupants.

Anne Curtis and Anthony Curtis.  The house was bought at auction by Anne and Tony Curtis in 1970.  Anne was an Executive Officer with the DHSS and Tony was a builder from the Curtis family of Alveston.  Tony was able to renovate the house completely.  They lived in the house with their children Lee Anthony and Scott Andrew.  A third child Robert Curtis was born there and the family moved to Old Forge, Rudgeway when James Robert was nine months old.  The last Electoral Roll which shows this family was that of 1980.  However we understand from the family that they sold the house in August 1979 to Mrs Doris Munday from Downend.

Read about the occupants