The Owners of Wigmore House 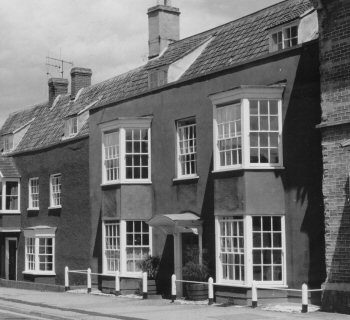 Number 10 Castle Street in Thornbury is called Wigmore House.  We believe that this is reference to its very early history and that this name can be traced back to its owners in the Sixteenth Century.

Roger Howell has also written about his speculations concerning the very early history of this property which would go further back even than this.  Read more about the possible origins of Wigmores

One of the earliest references that we have found so far which relates specifically to Wigmores as a property in Thornbury is to be found in the records of the Thornbury Court Leet which appeared in the notes of William A Caffall who wrote “Thornbury – A Study in Local History.”  The notes say ;

“Thornbury Court held 21st January 1635/6 William Barton comes and produces a deed by Katherine Tayer widow dated 1 November 8 Charles (1633) by which said Katherine granted to said William a messuage and barn called Wigmores and four acres of land within the borough without licence“.

We know a little about these early members of the Tayer (or Thayer as it is sometimes spelled) family.  We are indebted for much of this information to Meg Wise of Thornbury Museum who has not only helped us (as she has done throughout this project) but also made available to us a copy of an excellent book “The Thayer, Tayer Theyer families of Gloucestershire England” written by Patricia Thayer Muno and published in 1995.

We believe that Katherine Tayer was the widow of Edward Tayer.  According to the IGI Edward was baptised on 26th October 1577 and was the son of John (or Johannes) and Mary nee Roberts.  We know from various sources that Katherine was the daughter of James Eddys (sometimes shown as Eddis).  She appears to have acquired Wigmores by inheriting it from her godmother Katherine Rippe who was probably also her aunt.  Click here to read about Katherine Rippe

The will of Katherine Rippe dated 2nd August 1594 was proved in London on 16th November 1594.  It left a great deal of property in the Thornbury area and this included a house that she left to her goddaughter Katherine Eddys (later Katherine Tayer) which was described as “my house and grounds that I have bought of Wigmore and my whole estate therein.”  As Katherine Tayer became the owner of Wigmore House we are assuming that this shows that the property came from Katherine Rippe and that she bought it from some one she refers to as “Wigmore.”  We cannot explain why the previous owner is mentioned in this way and not given a full name.

It is possible we know a little more about Katherine Tayer’s husband.  There are several records that mention an Edward Tayer in Thornbury about this period.  There is an entry in the manorial records of a session of the Manor Court of Thornbury held on 11th July 1616 at which Arthur Harvest and his wife Alice, Henry Peirce and his wife Ann and a lady called Cecilia Tayer came to “seek licence to alienate one burgage and a quarter of a burgage to Edward Tayer and give a fine for alienation 2s 6d.”  We also know that Edward Tayer was the name of a Sergeant at Mace in Thornbury about 1618.

So far we have found records of at least two children of the marriage of Katherine Eddys and Edward Tayer.   One was John Tayer son of Edward Tayer who was referred to in an effeoffment of 1629.   The other child of Edward and Katherine was Anna or Anne.   We have found several records of her in the IGI (Some of which refer to her as Agnes).  We believe that Anna was born in Thornbury on 23rd June 1611.  The will of Katherine Tayer dated 21st January 1656 appears to confirm these family relationships.  It left to her daughter Ann Barton a gown and Holland sheet which she bought of her (Katherine’s) father, James Eddys.  The will also refers to her grandson as “John Tayer the younger” which means that her son was likely to have been John Tayer the elder.  However Patricia Thayer Muno’s book says that there were actually eight children in all (See below for the full list of these children).

Edward Tayer died before his wife on 5th November 1627 in Thornbury.  Katherine died at some time between January 1656 and June 1658.

Of the children of Katherine and Edward Tayer

Sadly at present we cannot fill in the gap between the acquisition of this property by William Barton in 1635/6 and Richard Wilkins who was associated with the property from 1688, although we believe it is likely to have become the property of John Mabbott.

The earliest continuous account of the history of the ownership of this house can be found in the Gloucester Record Office amongst the papers of the Harwood family of Thornbury and Alveston.

They begin with an Abstract which accompanied an indenture dated 22nd August 1754.  It is difficult to identify at this stage which of these people owned the property and whether any of them lived in it.  The beginning of the Abstract seems to relate to relates to properties in Kingswood near Wotton Under Edge which was once a detached portion of Wiltshire and only transferred to Gloucestershire in 1844.  It begins in 1615 with Robert Spark and Robert Itholl.  By 1688 the name of Richard Wilkins, who is later associated with both the Wiltshire properties and what is now Wigmore House, appears in the Abstract.

Richard Wilkins the elder and his son, who was also called Richard Wilkins were the owners of Wigmore House to about 1760.  Richard Wilkins was a Quaker and the owner of a considerable amount of property in Kingswood as well as in Thornbury.  His son Richard was a tallow chandler who may never have occupied the house.  Read more about the Wilkins family

The Fewster family owned Wigmore House amongst other properties from about 1782 to about 1858.  Wigmore House was advertised to let on at least two occasions during this time (1816 and 1834) and so we know that it was not always their main residence.  The family was famous in the area as surgeons and apothecaries as well as being property owners.  Read about the Fewster family

Dr Edward Long a surgeon owned and lived in Wigmore House from 1859 to 1863.  He became bankrupt and was forced to move to a smaller property.  Read more about him

The Cornock family acquired Wigmore House in 1863 and owned it until 1894.  The Cornocks were a large and well known land owning family in the Thornbury area.  Read more about them

Although John Crowther Gwynn owned Wigmore House, it was occupied in the Rate book of 1899 and the 1901 census by Mary Till, a woman of independent means.  Read about Mary Till.

In the 1911 census Charles Henry Francis Travers Wright and his family appeared to be the tenants of Lionel Williams.  Charles was 37 and a clerk in Holy Orders.  He was aged 27 and his wife Alfreda was 29.  The couple had only been married two years and they had one small child Elizabeth Joyce aged four months.  They had three servants living in the house which had 11 rooms.  The Reverend C.H.T. right was listed as living in the house in the 1914, 1915 and 1916 Prewett’s Directories and 1918 electoral register.

Dr Prowse owned the house from 1930 to 1959.  On 14th August 1930 there was a Conveyance from Dr L H Williams which transferred the ownership of Wigmore House to Dr Prowse, another well known local doctor.  Read about the Prowse family