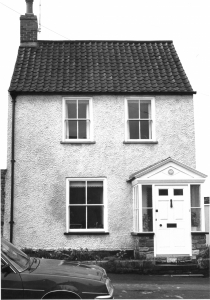 The house that is now 13 Castle Street in Thornbury looks deceptively small.

Below is part of a map of Castle Street in Thornbury.  The map was drawn up in 1948 and shows that number 13 Castle Street goes a surprisingly long way back from the street, having been much extended.  The property  also includes the series of buildings on the plot on the left  (as you look at the plan) which was formerly a builder’s yard next to it.

It lies between two houses number 11 Porch House and number 15 Clematis Cottage, and has been connected to both of these houses at different times.

Deeds held by South Gloucestershire Council in relationship to Stokefield House contain an indenture of 14th May 1830 between Alexander Smith a carpenter of Almondsbury, his brother James Smith and Thomas Gwynne.  They refer to 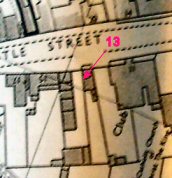 “all that messuage or tenement some time since erected and built by them the said Alexander and James Smith in part of the yard or garden belonging to the said first mentioned messuage or tenement (notes the house referred to here is Clematis Cottage) adjoining to the High Street …with the yard garden and outbuildings adjoining and belonging late in the occupation of James Bevan and now of James Morgan as tenant thereof.”

In the tithe Map of 1840 the house was owned by a member of the family who owned Porch House Thomas Gwynn.

Hodges.  We know that John Hodges bought both Clematis Cottage and the house that is now 13 Castle Street in October 1891.  John Hodges died on 10th February 1892 and his wife Elizabeth Matthews Hodges inherited the house from her husband.  In 1923 her son also named John, but known locally as Jack Hodges, agreed to pay off the remaining mortgage of £500 which was on the two properties and thus he became the owner.  Both John Hodges were carpenters and and so the yard between Clematis and number 13 was used by them as a builder’s yard.  Click here to read about John and Elizabeth Hodges

read about the occupants of this house