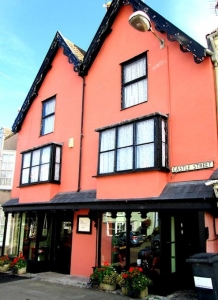 The property that is now 2 Castle Street in Thornbury is the double gabled property in the photograph on the right.  The house is one of the most noticeable buildings in the town, due to to its position and appearance.  It is a grade two listed building and has the typical appearance of a 17th Century timber framed house with its two gables.  It also has three diagonal brick chimney stacks.  We have a thumbnail image of these chimneys (below left).  Please click on it to see the details.  At least two of the stacks have the appearance of having been renovated and possibly rebuilt.

The photograph on the right was taken in September 2013 when it was about to open as a restaurant.

Although we have not been able to see the deeds we know something about many of the people who have been associated with this property.

Please click on the names below to read more about these people. We do not have access to the deeds of this property so our history of 2 Castle Street has had to be deduced from sale notices and rate books.  We would be very grateful for an opportunity to see the deeds or to hear from anyone who can tell us more.

The rate book of 1910 says that the owners of the house were “Executors of Late Hammond”.

On the 13th December 1947 there was an advertisement for the sale of the Estate of “Sylvester” Hammond deceased.  The sale included the shop in Thornbury let to the Lydfords and a pair of cottages on the Scop in Almondsbury.  The website “Gloucestershire Pubs” tells us that Silvester Hammond was landlord of the Bowl Inn in Almondsbury in records dated 1919 and 1939.  This appears to be confirmed by a similar item in “Bristol’s lost Pubs” website.  Silvester died on 25th February 1942 and was buried at Almondsbury.  Probate of his will shows that his estate was left to a widow Martha Eliza Stannett.

It seems that Silvester Hammond was the younger son of George Hammond and his wife Elizabeth Mabbott nee Gwynn.  He was also the brother of William George Hammond who had married Florence Mary Payne in 1905.  Florence Payne was the daughter of William Henry Payne who with his brother John was one of the heirs of the property.  We do not know how the property descended to Silvester but note that the death of George Hammond, Silvester’s father,  was registered in Thornbury in 1909 and that in 1910 2 Castle St was owned by the “executors of late Hammond.” 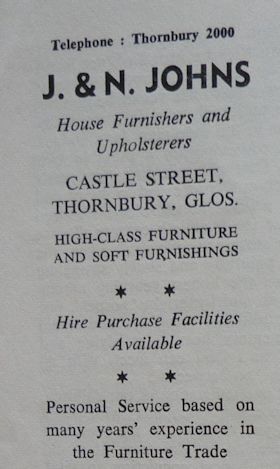 Mrs Lydford still appeared in the electoral rolls for this property until her death in 1975.  The property was then advertised for auction on September 30th 1976.  She may have ceased trading on her account around the time of the death of her husband as we have been told that the Johns family lived there, perhaps even around the same time that Mrs Lydford occupied the building.  We have some confirmation that Mr and Mrs Johns ran a furniture shop on these premises. The shop was advertised in the programme for Thornbury Flower Show of 1961 as ‘J & N Johns’ house furnishers.  Please see an image of this advertisement on the right.  We also have a letter written by Mr Johns from “J & N Johns House Furnishers” of Castle Street dated 5th November 1966 which expressed an interest in renting the Old Register Office.  This seems to imply that the shop needed new premises.  The application was rejected at that time.  In 1970 an advertisement still gives the address of J & N Johns house furnishers as Castle Street.

By 1971 they had opened a shop in St Mary’s Way, the then new arcade between the High Street and what is now St Mary’s Centre.  An advertisement for that year shows that furniture was sold in the new shop while fabrics, lampshades and pottery continued to be sold at 2 Castle Street.

After the Johns family ceased trading in Castle Street the property may have been used as a newsagent’s shop or newspaper office for a short period.  It later became a car parts shop run by Dennis and Carol Wilkinson.  We have a thumbnail image of a photograph taken at this period on the left (please click on it for a larger image).  It shows that part of the building was also used as a chiropodist by Lionel S Dearing .

The property was bought by Romy Gill and her family around 2010.  It has now been renovated and from September 2013 it became a restaurant.  The image on the bottom right is a detail from the larger photograph and shows the new sign of the business.  It is a thumbnail image. Please click on it for a larger version.  Click here to read about Romy’s Kitchen