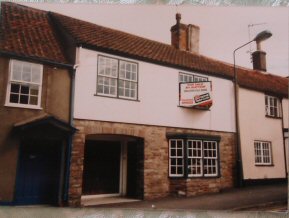 The house that is now 24 Castle Street in Thornbury shares much of its earlier history with its neighbour, 26 Castle Street.

The two properties were certainly owned by the same people from the Tithe Map of 1840 until 1954.  We have been told by a previous owner that the older house of the two is number 26.  We have not seen all the deeds that relate to these houses and so we cannot confirm this.

The houses that are now 24 and 26 Castle Street seem to have been even more closely linked in the eighteenth century.  An examination of the earlier land tax records up to at least 1784 seem to show that only one property was on this site.  However we have another land tax record dated 1796 that appears to show that by that time there were two properties here with different owners and occupants.

This could be an indication that the then owners, the Mills family, many of whom were builders, had created another property next to their own, either by dividing the building (the original house), or possibly even building a new one.

The will of James Allen dated 1817 refers to the fact that he bought this house from Henry Mills who died in 1791.  In 1796 the land tax record indicates that while James Allen owned and occupied the property that became number 26, James Mills owned and occupied a property next to Hester Putley.  We know that the Putley family lived at what became number 22 so it seems that James Mills was living in 24.

Charles Kington a baker lived in the original property from at least 1759 until his death in 1772.  His widow Anne carried on living here until her death in 1786.  Click here to read about Anne and Charles Kingston.

Henry Mills sold the property that became 26 Castle Street to James Allen before 1791.  We are provisionally assuming that for Henry Mills to be able to sell number 26 it is likely that he owned the original larger property.  He may have been responsible for redeveloping the property into two separate houses.  Click here to read about Henry Mills

James Mills.   We have not yet found the relationship between James Mills who owned this house in 1796 and the Henry Mills who owned the larger original property in 1784.  We do not believe he was Henry’s brother as he was probably baptised on 28th April 1720 which would make him the son of William Mills.  James married Martha Pullen on 28th March 1749 in Thornbury.

We know of the births of several of the children of James and his wife Martha nee Pullen (see below).  Sadly it appears to have been the last child of Martha and James that led to her death aged only 36 on the 18th November 1766, just ten days after the birth of their son William.

James Mills lived to be 81 years old and was buried in Thornbury on 24th April 1799.

Matthew Mills.  Although the land tax records of 1800 show that James Vaughan lived in this property, he was only the tenant.  It was owned by Matthew Mills, who continued to own it until at least 1809 at which time his tenant was John Box.  Read more about Matthew Mills

John and Sarah Leonard.  The 1840 Tithe Map shows that John Leonard owned both the properties and their garden, which were given the plot numbers 274, 275 and 276.  These are the houses that later became known as 24 and 26 Castle Street.  At least one of the properties, 26 Castle Street had been bequeathed to John’s wife Sarah by her father James Allen in his will of 1817.  We do not know how or when he acquired 24 Castle Street.  Read about John and Sarah Leonard

Francis Gayner.  Francis bought the two properties for £305 on 9th November 1881.  The rate book of 1885 shows that 24 and 26 Castle Street in Thornbury were owned by Francis Gayner.   Francis was a draper.  He was the son of Henry Penduck Gayner and his wife Sarah and was born 16th February 1851.  Read more about Francis Gayner

Francis Gayner continued to own 24 and 26 Castle Street until his death on October 23rd 1923.  After the death of their mother on February 5th 1955, Lucy Gayner, Ronald Court Gayner and Sidney Harriss Gayner put the houses up for sale.  Sidney was a shopkeeper in the High Street and Ronald Gayner was a bank manager.  Ronald was baptised on 22nd June 1892.  He enlisted in the First World War and served in France where he eventually became a staff sergeant.

The property and the one next door (number 26 Castle St) were advertised for sale in May 1954.

The council condemned 24 Castle Street as unfit for human habitation on 6th January 1958 but later rescinded this as “council consider it inexpedient to make a demolition order having regard to the effect of the demolition of the house upon other houses or buildings.”

In 1958 the property was offered for sale but it was noted that the property was subject to a closing order and could not be occupies until improvements satisfactory to the Local Authority had been made.  It was put up for sale as one of two lots, the other being 1 Castle Street.

John Desmond Turner of 40 Bradley Road Patchway bought 24 Castle Street from Doris Lucy Anstey for £3,000 on 30th October 1959.  Mr Turner was a surveyor working for the local Council.  He built on the present kitchen and took down the “open shed” at the back of the house.

Winifred Trayhurn bought 24 Castle Street from John D Turner for £4,750 on 11th April 1963.  The electoral registers from 1965 to 1975 shows that Winifred E Trayhurn lived at this address but in August of 1975 she sold the property to William Eric and Mabel Merrie.  Winifred was the widow of Austin ‘Jack’ Trayhurn.

William Eric and Mabel Merrie bought the house from Winifred Trayhurn in 1975.  From 1958 until at least 1965 they had lived at Inglenook Cottage on Alveston Hill.  By 1971 the telephone directory shows that they had moved to Manor Farm Cottage,Lower Cowhill Road in Oldbury on Severn.

We know very little about William and Mabel.  Mabel may have been born in 1898, the daughter of a tanner Thomas Hepburn and his wife Amy.  William was probably born on October 24th in the Basford area of Nottinghamshire.  William Merrie attended the Motor Vehicle and Transport college in Bristol and graduated from there in 1924.  Mabel Hepburn and William Eric Merrie married in the Bristol area in 1934.  William’s death in 1985 may have led to the sale of the property in 1986.  Mabel Merrie’s death at the age of 91 was registered in the Stroud area in 1989.

The present owners Mr and Mrs Black bought number 24 in 1986.  They also bought 26 Castle Street, which they later sold to the Roman Catholic Church.