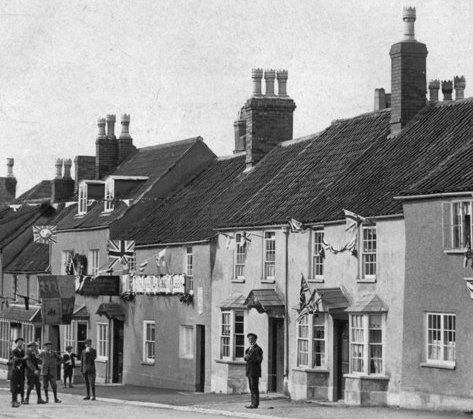 We have not yet seen all the the deeds of the property now known as 24 Castle Street in Thornbury.  Our information is based largely on land tax records and census information.

The 1840 Tithe Map shows that the property now known as 24 Castle Street had the plot number 274 so it is possible to get some idea of the position and size of the house at that time.  We believe that the house may either have been built or remodelled some time between 1784 and 1791.

Prior to 1784 the land tax records appear to indicate that it and the neighbouring number 26 Castle Street were a single property.  This is difficult to imagine in view of the changes that have been made to these buildings over the years but it is easier to see in the photograph above.   This photograph was taken about 1911 and shows numbers 24 and 26 as the two terraced houses on the right of the photograph.  A man is standing near the two front doors.  The two houses look very similar at this point. 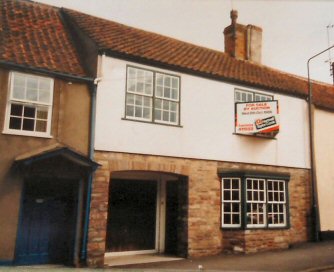 number 24 advertised for sale. Note garage door with the front door to the right of it

Number 24 Castle Street in particular has undergone many changes in its appearance over the years. Until the most recent rebuilding it looked like this photo on the left.  Currently ( 2011) it looks like the photo below on the right. 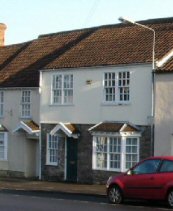 Some traces of the earlier features remain inside the house and at its rear.

At one time it was possible to enter the garden from the street.  The narrow passage way between the extension on the back of the house and number 26 was apparently used by a previous owner who kept goats and was able to drive them through the door and into Castle Street.  We have a thumbnail image of this feature below on the left.  You can click on the photo below to see the passageway more clearly.

There are still indications of outbuildings and we have some evidence as to what they may have been. In 1852 The Bristol Mercury carried a notice advertising the sale by auction on April 3rd 1852 of the property.  It described it as “a convenient and well-built freehold dwelling house situate in the town of Thornbury with bake house, stable and necessary outbuildings and productive garden“.

The same advertisement says that this house (lot1 in the sale) had a passage way which was a right of way for number 26 (which was lot 2 in the sale).  It is interesting to read that the house had a bakehouse as several bakers are known to have lived next door in number 26.

The current owners of the house (number 24) say that the boundaries between the two houses appear to have been altered from time to time.