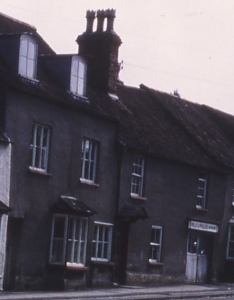 Number 28 Castle Street in Thornbury is the smaller building to the right of this photograph.  At the time the photograph was taken it was owned by the Mills family and part of it was used as workshops by the house decorating firm known as Mills and Phillips.  The house with dormer windows adjoining number 28 is now number 28A.  Although the two are now completely separate houses they share much of their earlier history.

Read about the owners of 28 and 28A Castle Street

Using the indentures that we have found so far and a number of Land  Tax and other records we have been able to trace some of the occupants of the house that is now 28 Castle Street.

George Longden.  The land tax records from 1800 show that this house was occupied by George Longden, and that he rented it from William Taylor (or Tayler) of Almondsbury.  George married Rose Flyde in April 1771.  Their daughter Sarah was baptised in Thornbury on 11th December 1774.

By 1823 the Record says “late George Longden”.  We do not know how up to date these records were but the parish records of St Mary’s Church in Thornbury show that George Longden died aged 81 in March 1821.

The will of Abraham Riddiford shows that he left the properties that became 28 and 28A Castle Street to his daughter Ann. In 1827 the will described them as follows;

The will is therefore indicating that in 1827 one house was divided into two and these properties occupied by Richard Landsdown (rather than Thomas) and someone called Carter as tenants.  On the 1840 Tithe Map (which was drawn up some time between 1837 and 1840) one property is shown as number 277 and it is occupied by two tenants; Joseph Carter and Edward Trayherne.  This appears to correspond to what is now number 28 Castle Street.

This is somewhat confusing as the land tax records up to 1832 continue to show “Thomas Landsdown” rather than Richard Lansdown as the tenant.  At the moment we have no information about Richard.  He may however have married Hannah Wisse 10th April 1788.

Edward Trayherne (or Trayhurn) seems to be the tenant who replaced Richard or Thomas Landsdown.   Edward married Eliza the daughter of Joseph Birt who was living in the adjoining property which became 28A.  Read more

John Luce.  The second tenant mentioned was called John Luce.  He was a master butcher aged 42 living in 17 St John Street by the 1851 census.  By the 1870s they were living in Pullins Green.  Read more about John Luce

Henry Withers.  The 1851 census seems to show that a shopkeeper was living in the house which is now 28 Castle Street.  This was a grocer called Henry Withers aged 46.  His wife was a school mistress called Sarah aged 46.  Their children were Henry aged 14, Frederick aged 12, Ann aged 8 Joseph aged 7 and Isabella aged 4.  Read more

The 1851 census also shows three other households in this area; James Moxham, Joseph Birt and Sarah Webb.  In the absence of further information we have assumed that these families were living in parts of what is now 28A Castle Street.

In the 1861 census the tenants were  Thomas Hopkins and Joseph James.

Thomas Hopkins.  At the time of the 1861 census Thomas was aged 60 and an agricultural labourer from Shirehampton.  He had a son Jonathan aged 25 and unmarried who was born in Berkeley.

Thomas Hopkins had been widowed twice.  Although we know that Thomas was the tenant of a cottage at Stokefield according to the Tithe Apportionment Survey of 1840, we have been unable to trace him in the 1841 census.  His children were living in one of these cottages without a parent at the time of the census.  They were; Lucy Hopkins aged 16, Thomas aged 15 and Jane aged 14.  We cannot explain why but the rest of the family is shown in this census as a separate household.  They were William Hopkins aged 12 and John Hopkins aged 10.  The explanation seems to be partly because the head of the household in 1841 was a widower. Thomas Hopkins was a servant, although we do not know in what capacity.  It may have been that his work took him away from home.  Thomas married Celia Whatkins on 14th October 1846 in Thornbury.

The 1851 census shows that the Hopkins family lived next door to the Gastrell family in the Stokefield Cottages, possibly in part of the original house that had been built there and much later divided into two. Thomas was a general labourer aged 51 and his wife Celia was also aged 51.  His son, John aged 19 was a shoemakers apprentice and Jonathan aged 16 was an agricultural labourer.  They had an agricultural labourer staying with then who may have been called William Stephens.

On 13th August 1852 George Ponting inspected premises occupied by Thomas Hopkins in Castle Street, which we assume must be in Stokefield Cottages and “found that swine were kept thereon so as to be a nuisance to the occupiers of adjoining properties.”  A complaint was made to the magistrate to get it abated.

Of the children of Thomas Hopkins

William Hopkins in 1851 and then aged 21 and born in Berkeley was a coachman for the Maclaine family in Kington.

John Hopkins died aged 26 years and was buried in Thornbury on 31st May 1857.

Jonathan Hopkins may have died in Berkeley in 1865.

Joseph James.  The census of 1861 shows that another tenant of this property was Joseph James an agricultural labourer from Stapleton in Bristol who was living with what seems to be his third wife Priscilla aged 38 from Alveston.

Joseph was the son of Henry James a labourer.  He was a widower aged 40 when he married Priscilla Cornock aged 29 on 16th May 1852.  We do not know who Joseph’s first wife was.  His second wife was Ruth Greenman the daughter of Richard Greenman.  He married Ruth on 23rd November 1845, at which time he was already a widower.

The Gloucester Quarter Sessions recorded that on March 21st 1851 Joseph James a labourer aged 41 and from Thornbury was sentenced to six weeks hard labour.  He had been charged with “feloniously stealing at Iron Acton half 100 cwt of coal the property of Jonathan Blanch.”   He was described as follows; height 5ft 2 1/2 inches with light brown hair, grey eyes, oval face and a pale complexion.  He had a cut on his right hand.  We note that he did not serve this sentence but was released on 25th March 1851 by order of the court.

In the census of 1871 Joseph and Priscilla were still living in this house. Joseph died on 22nd November 1879.  In 1881 Priscilla was a charwoman aged 60 living alone in Silver Street in Thornbury.  The house was part of what later became 7 Silver Street.  Priscilla died on 17th April 1885.

The rate book of 1867 shows there were three tenants John Foot, Joseph James and Joseph Birt. Read about Joseph Birt.  Sadly we have no further information whatsoever about John Foot.

In 1871 the rate book shows there were the same three tenants John Foot Joseph James and Joseph Birt.

In 1880 the rate book still shows that Joseph James was the tenant of the property which by this time was owned by George Crossman.  This is despite the fact that Joseph died in November 1879.  This might be because the book was slightly out of date or because Priscilla was managing to pay the rent for a while before she moved to Silver Street.

Read about the owners of 28 and 28A Castle Street