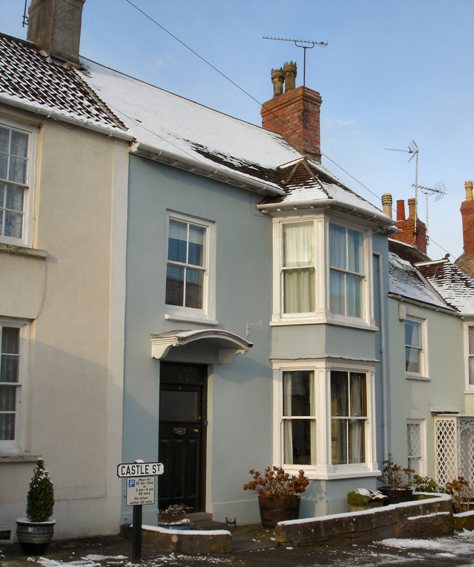 We know from the 1840 Tithe Survey that what is now 3 Castle Street in Thornbury was allocated the plot number 41.  The accompanying Tithe Apportionment shows that it was a house and garden owned by Thomas Gwynn and occupied by Edward Pearce.  From this information we are able to trace that the 1819 Land Tax record shows that the same property was owned by Richard Gwynn.

We believe that the Gwynn family had previously owned a large area of the land and property on the west of Castle Street and that this had been inherited from the Crowther family.  By 1840 much of this property seems to have passed to other owners, but Thomas’s father, Richard Gwynn, still owned a number of the surrounding fields and Porch House.  The 1841 census shows that Porch House was occupied by Richard Gwynn and possibly shared as two households with his son Thomas and his family.  Read more about the Gwynn family

In 1899 the estate of John Crowther Gwynn senior was put up for sale.  Lot two in the sale was “a house and garden in the occupation of E Pitcher as yearly tenant at a rent of £15 per annum and land tax of 3s 6d. Borough rent 8d. It has front and back sitting rooms, kitchen, back kitchen, pantry, cellar and 4 bedrooms.”

It was bought by Edgar Pitcher, the then tenant.

We have separate web pages about Edgar Pitcher and his brother Augustus Ernest Pitcher who also later occupied the house.  Members of the Pitcher family continued to live at the house until 1977 when Annie Pitcher died.

The electoral register of 1980 shows the most recent owners, Anita Hardwick and Michael Hardwick, who still occupy the house.

The image on the right shows an extract from the 1840 Tithe Map and 3 Castle Street was marked as plot number 41.  From this we can have an idea of the relative size and position of the property at that time.   Although the current owner has been kind enough to share the information in the existing deeds of the house, we are still unable to determine when it was built and what it would have looked like originally.  However, we have been able to trace some changes to the property.

We have a record dated August 1912 to show that Edgar Pitcher extended the scullery and installed a WC. 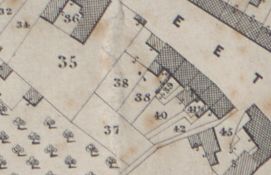 It is noteworthy that the two neighbouring properties had privies at the bottom of the garden, which would presumably have been emptied into a cesspit or been removed by the ‘nightsoil’ man in buckets.  This house presumably had a similar arrangement originally but had a tank for waste water installed before this latest change.  Mains sewage was not available in Thornbury until the mid 1930s.

The second major addition was on the 10th November 1914 when Edgar Pitcher bought land from the trustees of H C St John deceased.  The land in question was plot number 37 on the Tithe Map and stretched from Latteridge Lane down behind the row of house to the land owned by Porch House.  The house still has an unusually large garden.