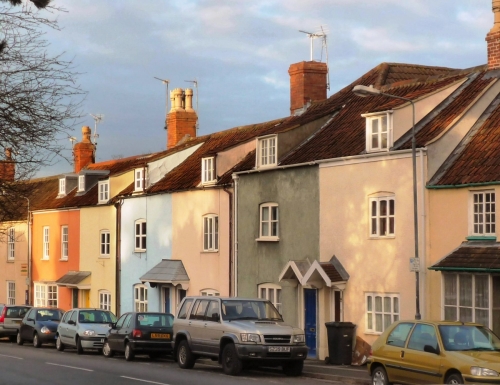 The six houses that are now 32 to 42 Castle Street in Thornbury share a common past. They were all built by Joseph Parslow on land that had previously had a house and a malt house on it.

However the site of these houses and probably parts of the existing houses has a longer history.  We have traced some of the earlier owners of property on the site and their families, including the Hilpe, Hawksworth and Stone families who owned it in turn.

Click on any of the addresses to read more about the individual houses.

We are very grateful to Mrs Ann Riddiford a local history enthusiast who has researched the origins of number 40 Castle Street in Thornbury.  From this she has provided much useful information on the history of the house and its neighbours from numbers 32 to 42.

There are also papers held in Gloucester Records Office dated 1792 which we know relate to this property.  These refer to a legal decision about whether rent was payable to Thornbury Corporation in respect of a property occupied by John Stone and called “late Hawksworths.”  The decision was that the rent was indeed payable “under the benefaction of John Hilpe of 1604.” 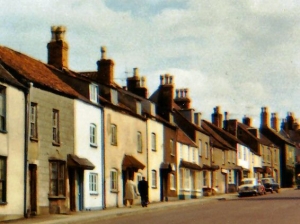 The Hawksworths
A Borough Rent Roll of about 1680 shows that the property for “John Stone – the stable, oxenhouse and Mills house” was next to that of a Richard Hawksworth both of which are in this area of what is now Castle Street.  This suggests that John Stone might have owned the property at that time and that the Hawksworth family appear to have owned the neighbouring property.  We have no record of how this John Stone acquired his property from the Hilpe family or when he sold it to Richard Hawksworth the elder.

We do have records that show that from 1725 to 1752 the Hawksworths paid an annual sum to the Mayor (in respect of the rent imposed on it by the bequest of John Hilpe) which implies that they owned it for at least this period.

At present we know little of Richard Hawksworth, the elder who died in 1689. He married Christian Haynes and they had at least five children: Richard, Robert, Joseph, Christian and Ann.   His son, Richard  was a yeoman of Alveston who married Sarah Clement of Olveston.  This marriage was announced at the Frenchay Meeting House and at Olveston and took place on 28th April 1680 so that this Richard Hawksworth appears to have been a Quaker.   He died near Castle Precincts in Bristol in 1712 and was buried at Quaker’s Burial Ground at Hazel.  They had several children including Richard, Walter and Sarah.

Richard’s son, Richard, was a linen draper in the area of the Castle Precincts in Bristol.  Richard married Elizabeth Corsely on 4th July 1707.  He was buried in 1752 in the Quaker’s Burial Ground at Redcliffe on 28th March 1752.  The order for his burial refers to opening a grave and so it is possible he was put into a family plot that already existed.

John Stone
John Stone bought the property, which he had previously tenanted, in 1752 from Walter Hawksworth.  As mentioned above the Stone family seem to have a long association with this area.

We know from an abstract of title dated 1870 that at one time John Stone a maltster owned another property, Porch House on The Plain (now known as 10 and 11 The Plain).  It seems that he ran into severe financial problems.  On 8th January 1766 there was an attested copy of a conveyance of Porch House for the benefit of his creditors who included William Turton of Tockington, John Marsh of Thornbury and Samuel Thomas a skinner from Bristol.

In order to avoid bankruptcy John Stone agreed to convey to the gentlemen mentioned earlier a messuage in which “Joanna Stone formerly dwelt and John Marsh now dwells” and two acres of land near Crossways, four acres of land called The Paddocks, seven acres which were known as Butlers Mead in Banwell and a “fardell” of land called Old Auster.  All these had been bought by John’s grandfather William Stone.

The sale was also to include the property in Castle Street which was then described as “all those three messuages sometime since rebuilt by Richard Hawksworth deceased and converted into one messuage and a malthouse .. and one parcel of land one quarter acre formerly in Tilt Field but now inclosed called Draycott …… all purchased by John Stone (party hereto) from Walter Hawksworth of Bristol and now in the occupation of John Stone.”

This document also explains some of the family history of John Stone.  From the documents it becomes clear that that some of the property he owned was originally bought by his grandfather William Stone who left part to his daughter Mary and after her death to his son John Stone the younger.  John Stone the younger and his wife Joanna were the parents of the John who bought the malt house in 1752 and of his sister Ann Stone who later acquired it.

An indenture of 18th July 1799 concerned the surrender of land called Draycotts to another member of John Stone’s family, his natural or reputed daughter Mary Stone, spinster, purchased by John Stone from Abraham Richard Hawksworth to the use of said Mary Stone.

At Gloucester Records Office (reference D866/R/19) are documents dated 1782 which presents the case why tax was payable on the malt house and the rest of the property.  It explains that Richard Hawksworth had previously owned this property and he had paid the required tax.  It also describes the premises as two messuages adjoining, one of which was converted to a malt house and “hath time immemorial been occupied with the other messuage.”  The court case heard that in 1752 the property was sold to John Stone who refused to pay, presumably because he couldn’t.

Ann Stone who succeeded him to the property also refused to pay.

Ann Stone was mentioned in the Assessment to pay Poor Relief which was drawn up in 1770.  The property on which she was supposed to pay tax was described as “late Hawksworths.”  This is presumably because John’s sister Ann had acquired the property as a result of the threatened bankruptcy and subsequent sale. 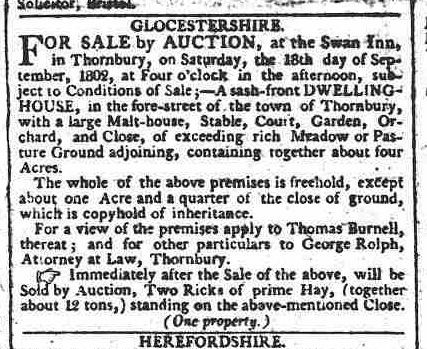 At Gloucester Records Office we have seen some documents which relate to the malt house.  These show that from 1768 Miss Ann Stone was leasing out the malt house and stables which at some point had become a messuage, malt house and stables.  From the 1780s to at least 1800 land tax Records show that John Stone was being charged, if not actually paying, 9s tax on a property in that area.  John Stone died on the 11th October 1800 aged 80 years and his sister died on 31st March 1802 aged 89 years.

The property was devised by Ann Stone in her will to Thomas Burnell of Thornbury whose under-tenants were already occupying the property.  There was a mortgage on it at that time which was held by James Allen of Morton a yeoman.

The Gloucester Journal of September 6th 1802 (above left) provides some further information about the property which was said to be occupied by Thomas Burnell and was now to be auctioned at the Swan Inn on September 18th 1802.  It is interesting to note that the property now has four acres of land attached to it.

Presumably the auction was unsuccessful as by a lease and release of 6th and 7th April 1807 Thomas Burnell and James Allen conveyed what was then three properties to Joseph Parslow.  These properties were described as having been lived in by John and Ann Stone and now occupied and used by Thomas Burnell and his under- tenants.  The properties had a house owned by John Box on one side and one owned by William Limbrick on the other.  The properties had a yard, garden and orchard of one acre and one parrock which was generally known as Draycotts.

Read about Joseph Parslow who bought and redeveloped this property