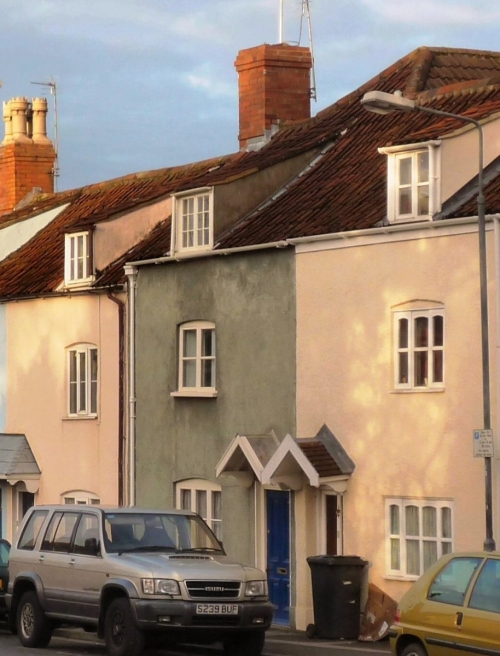 The house that is now number 34 Castle Street in Thornbury is the little grey house in the photograph on the left.  The early history of this house is linked to that of its neighbours as the six houses which are now numbers 32 to 42 Castle Street were all built by the same person, Joseph Parslow.

Thomas and Elizabeth Savery.  The 1840 Tithe Apportionment Map shows that Thomas Savery lived  in the house and that it was owned by William Reeve or Reeves. We have not been able to trace any information about William.

Grace Reeves and Elizabeth Gibbs.  The 1851 census shows that the next occupant of the house that we know about was Grace Reeves a nurse from “Luckam” (actually Luckham or Luccombe) in Somerset.  She was living with with her 30 year old unmarried niece a dressmaker Elizabeth Gibbs who was born in Thornbury.  We do not know very much at all about this family.  It seems probable that Elizabeth Gibbs was the daughter of William and Sarah Gibbs who was baptised 11th September 1814.  William Gibbs married Sarah Reeves in October 1811.  We believe that Sarah Reeves would have been the sister of Grace Reeves’s husband.

We know that Grace Reeves owned this property because in 1915 when the neighbouring house (number 36 Castle Street) was sold it was said to be next to a house be formerly owned by Grace Reeves (number 34).  We do not know how or when she acquired it but we assume she inherited it.

The 1861 census describes Grace Reeves as a widow aged 78 who was a nurse born in “Luckin” in Somerset and her niece Elizabeth Gibbs aged 40 and an unmarried governess from Thornbury.  There were also three children in the household Mary Gibbs aged 15 also a niece and Frances Weekes a boarder aged 5 and Wesley Whitfield also a boarder aged 5.

Grace’s “niece”, Mary Gibbs was the daughter of Charles and Elizabeth Gibbs.  This would make her actually Grace Reeves’s great niece rather than her niece as Mary’s father, Charles Gibbs, was Grace’s nephew.  Charles was a cordwainer.

The 1867, 1869 and 1871 rate books all show Mrs Reeves continued to occupy the house.  The 1871 census shows Grace Reeves was a widowed monthly nurse aged 94 from Somerset living with her lodger Mary Gibbs a 46 year old unmarried school mistress from Grovesend.  This Mary Gibbs was actually a niece of Grace Reeves.  She was the daughter of William Gibbs and his wife Sarah and would have been the sister of Charles Gibbs.

Grace died in Thornbury in the March quarter of 1872 aged 95.

It seems that one of Grace Reeves’s nieces actually owned the house after her death because the 1876, 1878 and 1879 rate books shows that Ann Bevan lived in this house and that it was owned by Miss Gibbs.  Possibly this would be the niece, Mary Gibbs, who was living with her before her death but we have no confirmation of this.

Ann Bevan.  The 1881 census shows that Ann Bevan, a staymaker 54 years of age, was living in the house with a blind lady Harriett Griffin who was a boarder aged 69 and a widow maintained by her son.  They had a visitor Mary Griffin who was an unmarried laundress born in Devizes Wiltshire and aged 34.

Caroline Butler nee Bevan.  The rate book of 1899 shows that Ann Bevan continued to live in the house but that it was owned by Mrs Butler.  We believe that “Mrs Butler” was the daughter of Ann and Thomas Bevan.  Read about Caroline Butler

Mary Reeves.  The rate book of 1910 shows that Mary Reeves lived in a house owned by the representatives of the late H Butler.  The 1911 census shows that the house was occupied by the widowed Mary Reeves aged 45 who was living with her daughter Annie Reeves, a dressmaker.  The census records that Mary had had three children but that one had died.  The inscriptions in Thornbury cemetery tell us more of the story.  There is an inscription for Frederick Charles Reeves the beloved son of Charles and Mary who died August 19th 1901 aged 7 years and 9 months. There is an additional inscription to the effect that Charles Reeves also died.  He passed away on October 25th 1909 aged only 48.  Read more about Mary and Charles Reeves.

She was born in Bristol and was the daughter of Jonathan and Frances Price.  In 1881 she was living with her parents in Hotwells Road in Clifton.  She was 18 years old and a pupil teacher.  In the 1891 census she was teaching at a National School in Imber in Wiltshire.  In 1901 she was living in Baylham in Suffolk, where she was a schoolmistress living in the School house next to the Rectory.  She seems to have moved into Thornbury about 1910.  She died in Bristol in 1944 aged 82. On 23rd February 1914 Arthur John Barge, 25 a chauffeur living in Thornbury married Emily Mary Bowyer aged 20 of Kington.  Their first child was their daughter Edith whose birth was registered in 1915.  Please see below for more details of their children. The last will and testament of Emma Ann  Screen dated 15th May 1916 shows that Emma was the owner of the property at that time.  Emma died in Dulwich on 2nd February 1917.

On 7th September 1918, 34 Castle Street, amongst other properties was put up for sale.  It was said to be “in the occupation of Mr J Barge at £10 and 10 shillings a year”.  The Western Daily Press of January 11th 1918 showed that it had been bought by Mr S Barge.  We assume that Samuel Barge bought the house for his son.

In 1954 the electoral roll showed Arthur John Barge and his wife Emily shared the house with their son, Roy, and Arthur’s sister Leah.  The same record also shows that their daughter Olive and her husband Ronald York lived at 34 Castle Street.  It seems possible that Emily Barge died between 1958 and 1965 as she does not appear in the electoral roll for 1965.  It seems likely that her death was registered in Bristol in the March quarter of 1959.  After 1975 their son Roy Barge occupied the house.  We understand that Roy lived there alone for many years and did not marry.

Of the children of Arthur John Barge
Edith Leah Barge was born on 12th December 1914.  We have been told that Edith married John Moran

Herbert J Barge was born on 4th May 1916.  Herbert was known as Tom.  We have been told that his wife’s name was Joyce.  The photograph on the left shows Tom whilst he was serving with the 8th Army.  There is a Free BMD record that Hebert J Barge married Frances A J Watkins in Thornbury in 1940.

go to the early history of the properties on this site