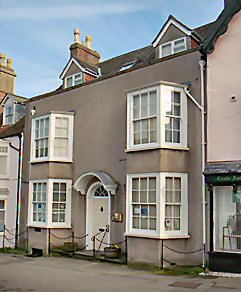 The photograph above shows 4 Castle Street in Thornbury (also called Wellspring House) as it was in the 1980s.

Please click on the name of any owner of the house in the list below to read more about them.

Thomas and Mary Bingham 1753 – about 1800.   We know from later documents that the Binghams were associated with this house.  We also know that from at least 1780 Mary Bingham was paying land tax on property in this area, which she appears to have inherited from her father.  At this stage it is still not clear whether the property Mary Bingham inherited was the land on which numbers 2 and 4 Castle Street was built or a house.  It is noteworthy that her other two sisters inherited houses but Mary inherited “closes of land”.

Henry Bingham about 1800-1832.  From the land tax records we know that by 1800 Henry Bingham owned two properties which are now known as 2 and 4 Castle Street.  From later documents it becomes clear that he was living in number 2 Castle Street and renting out number 4.  It appears that Henry Bingham’s brother Thomas inherited this property from his grandfather Richard Wilkins via his parents, Thomas and Mary Bingham.  Henry then acquired the two houses from his brother Thomas and eventually left them in his will to his niece Sarah Carter for her life time.  After her death they were to be sold and the money shared in equal parts amongst William and Margaret Lllewellin and Louisa Drew (his great nephew and great nieces).  Henry died November 29th 1831.

Sarah Carter was the niece of Henry Bingham who left her the house following his death in 1831.  Sarah lived in the house next door until her death in 1846.

Richard Scarlett 27th August 1852 – 1919.  Richard Scarlett was a major figure in the life of Thornbury for very many years.  He was a solicitor, Superintendent Registrar, Fire and Life Insurance agent, actuary, Clerk to the Board of Guardians, farmer of 15 acres, Steward of the Manor of Thornbury and for a short time Thornbury’s Mayor.  He never lived in the house but it was lived in by his son Frederick for the short time between his marriage and his early death.  The property remained as part of Richard’s considerable holding of property in the area until his death.

Samuel and Eliza Fudge 26th June 1919 – 4th July 1929.  Samuel’s collection of jobs was similar to that of Richard Scarlett.  He managed to be an architect, a land surveyor, steward to Thornbury Castle, secretary to the Gas Company and Collector of Taxes.

Hubert and Edna Fudge  4th July 1929 – 1975.  Hubert was the son of Samuel Fudge.  He grew up at 4 Castle Street and he and his wife, Edna were associated with it for very many years.  Hubert was Collector of Taxes and ran the Employment Office from 4 Castle Street.  He also found time to be a Surveyor, Land Agent, Steward to Thornbury Castle, Secretary to the Gas Light and Coke Company and an Insurance Agent.

Edna Fudge  1975 – 7th February 1986.  Edna Fudge owned the house after her husband’s death.  She helped her husband run the Employment Office and issued Ration books etc during World War Two.  She also took over the Candy Store sweet shop in the High Street.

Angela Tallintyre and Judy Joyce.  The daughters of Hubert and Edna Fudge inherited this property on 7th February 1986.

Read about the occupants of this property