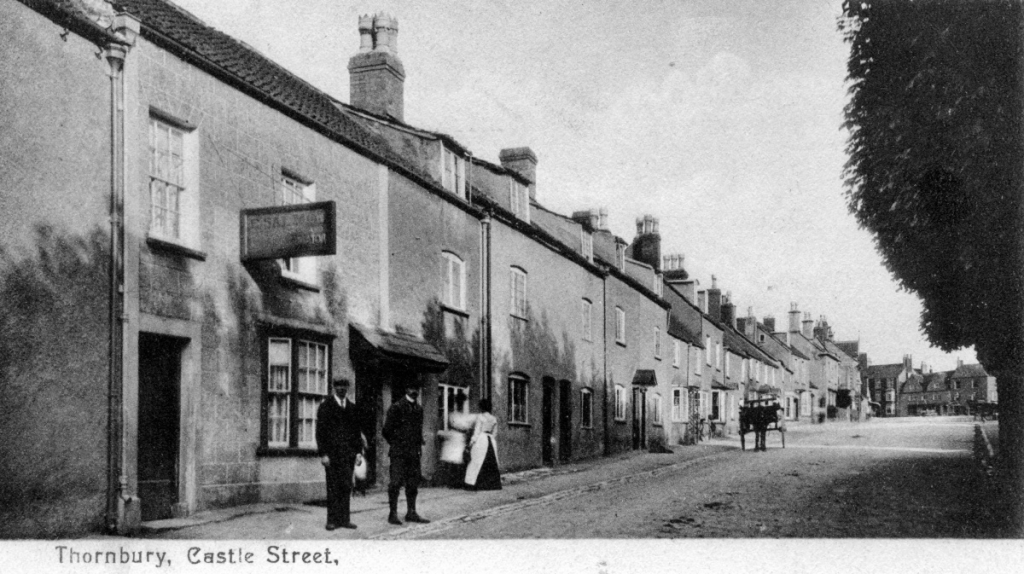 An indenture of 1812 says that this house was owned by Thomas Morgan and sold to John Powell the younger (and that it was a house) “wherein Ann Hooper widow lately inhabited and William Powell Mason (brother of the said John Powell) doth now dwell.”

We know very little about Thomas Morgan, although his name continues to appear in Land Tax Records (for example against a very expensive house in the 1830 tax records).  We have been unable to trace Ann Hooper in any records.

John Powell junior the owner of number 40 Castle Street in the 1840 Tithe Apportionment Map (the premises were then void) died in July 1849 aged 74 and the property passed to his brother William Powell .

In the 1841 census William Powell was living in what is now Clematis Cottage on the other side of Castle Street.  He was a mason aged about 50 and his wife was called Ann but probably known as Nancy and aged about 53.  They had three children living with them William aged 20 (baptised 13 August 1820) a mason, Elizabeth aged 18 (baptised 24th January 1821) and John aged 15 (baptised 28th May 1823).  John Powell, William’s son, married Jane Poole on 7th March 1846.  Read more about the Powell family.

In the 1851 census the house was uninhabited.

Eli Bruton.  In the 1861 census number 40 Castle Street was occupied by Eli Bruton.  Eli Bruton was a carpenter and wheelwright from Thornbury aged 35.  His wife Maria was 39 and was born in Sheepscombe.  They had two children James and Ann aged seven and four. 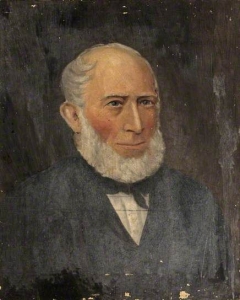 Eli Bruton was the son of James Bruton.  Eli was born about 1826.  In 1853 Eli married Maria Wager who was born in Sheepscombe.  She was buried on 11th February 1911 in the Baptist Churchyard.  Eli died 7th February 1911 and was also buried in Thornbury Baptist Church on the same day.  The probate record shows his estate was valued at £2074 and that their sons James and Charles were granted probate.

They had two sons; James who was born in 1854 and Charles George Bruton (1858-1931).  Charles married Annis Rugman and they were the parents of Mary Bruton (1890-1984) who was a major contributor to Thornbury Museum.  Mary was an amateur artist and so we are able to show this portrait of of Eli Bruton which was presented by her to Thornbury Museum.   For the same reason we are able to show here photographs of  Charles George Bruton and his wife Annis.   Their other children were Elizabeth Bruton born in 1828 and Emma Bruton born in 1839.

In the 1861 census William Powell senior was still living on the other side of Castle Street in a house now called Clematis Cottage.  At that time William Powell senior was a widower of 70 and the parish clerk.  His son William was unmarried and aged 40 and a mason.  They had a house servant called Ursula Fry aged 16.  There was also a visitor called Charles Morgan aged 29 and a butler.

Some time after this date William Powell appears to have moved into 40 Castle Street.  William’s wife Nancy died July 21st 1855 aged 73.  By his will dated 1855 his property was to go to his wife Nancy for her life time but as she had predeceased him it was to go to William Powell their son.  William who had been a clerk and sexton of St Mary’s Church for 50 years died on September 18th 1866 aged 77.

By 1869 the rate book confirms that William Powell junior was living at number 40 Castle Street.

By the 1871 census William was 51 years old and a milk man and farmer of 18 acres.  He was living at 40 Castle Street with his brother John aged 47 and sister in law Jane aged 46.  William farmed at the Pithay, which he rented from E S Howard at Thornbury Castle.

The 1891 census shows us that William Powell had moved to the High Street to live with his sister Elizabeth and her husband George Fry.  William’s widowed brother, John Powell, also lived in the household.

William Blake.  The Special Drainage Book of 1890 shows that William Blake was living in the house that became 40 Castle Street.  William was the son of Henry Blake by his first wife Mercy and he was baptised at Yatton Keynell on 7th July 1867.  The family moved to Thornbury and the 1871 Census shows them living in Kington Lane.   William was the younger of two sons.  He married Emily Coates in  Thornbury in 1889.  In the Census of 1891 he was described as William Blake aged 23, an engine cleaner from Ford in Wiltshire who was living with his wife Emily aged 22 who was from Thornbury.  By 1911 they were living at 29 Tadema Road in Chelsea.  William was a milkman.  Click here to see an album of photographs of the Blake family