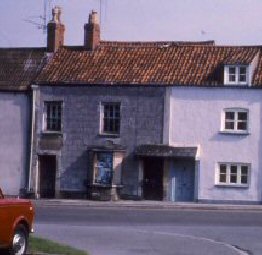 We know that Mrs Ann Richards bought two of the six properties that were built by Joseph Parslow.  The deeds of 40 Castle Street include an indenture for the sale of that house by Thomas Morgan to John Powell in 1812.  In this document the house next door (number 42 Castle Street) is said to be a “dwellinghouse late of him the said Joseph Parslow afterwards of Ann Richards and now of him the said Thomas Morgan in the occupation of Martha Knapp”.

It would seem that Ann Richards had bought 42 Castle Street by 1809 but before 1812 it had become the property of John Morgan.  The same deeds gave the owner of number 40 the right to

“pass and repass from the said street by the said passage on the Northward side of the said Messuage in the occupation of the said Martha Knapp unto into and from the small court there and to draw raise and take water from the well there.”

It would seem that number 42 either had the added advantage of having its own well or at least had the passageway allowing others to access it.

The photograph above shows the house in the 1960s.  It is the house on the left.  It has a small door on the left as well as the front door on the right under the shared porch.  It seems likely that this was the door to an alley way which gave access to the common well.

We have been unable to trace any records of Mrs Richards and very few of Thomas Morgan, the earliest known owners of the house.

In the Tithe Apportionment Survey Map, drawn up between 1837 and 1840, the house was given the tithe number number 285 and it was said to be owned and occupied by Martha Knapp.

We have been unable to find any further trace of Martha Knapp.

The 1851 census shows that the house was empty.

Alfred Harvey.  In the 1861 census the house was occupied by Alfred and Caroline Harvey.  Alfred was the High Bailiff of the County Court of Gloucester.  He was aged 37 from Westbury in Gloucestershire (this appears to be Westbury on Trym) and Caroline was aged 36 from Bristol.

Their four children were born in Thornbury.  Edward was aged nine, Ada aged seven, Louis aged four and Frank two.  When Edward was baptised on 14th April 1852, Alfred Harvey was an accountant.

They had some people staying in the house in the 1861 census.  Elizabeth Harvey Greenway aged 38 was the wife of a carpenter and joiner and her children were Elizabeth aged 8 and Eva 5.

In the 1841 Census Alfred Harvey was an 18 year old painter from Westbury on Trym living with his family.  His father Job Harvey was a barrister and his brothers were John a bookbinder and Leonard? an accountant.  He had four sisters, Sarah aged 25, Mary aged 15, Eliza 12 and Eileen 3.

The 1867 Rate Book suggests that Alfred had moved as he was listed as renting a property now known as 3 St John Street.

In July 1871 the sale of the house on the east side of Castle Street (probably 42 Castle Street) was advertised in the Bristol Mercury.  The house was said to be in the occupation of Thomas Powell.

The 1881 census shows that George Ponting was a water bailiff and gardener then aged 68.  He was born in Berkeley.  His wife Marianne was aged 54 and born in Swainswick in Somerset.  They had a son Edward aged 22 and a plumber who was born in Thornbury.  Their younger son Sydney was a solicitor’s clerk aged 18.  They had a daughter Annie who was 16.  Read more about George and Marianne Ponting

The 1885 rate book shows that George Ponting had continued to live in number 42 but that it was now owned by Mrs Collings.  This is because Alfred Collings had died on March 1st 1882 aged 63 years.

Henry Blake.  By 1890 Henry Blake lived in the house that is now 42 Castle Street which still owned by Mrs Collings.  The 1891 census shows that Henry Blake was aged 49 and a labourer from Colerne in Wiltshire.  His wife, Mary, was aged 36 and she was from Bristol.  Their daughter Winifred was under one year of age.  Living next door to them at 40 Castle Street was Henry’s son by his first marriage, William Blake aged 23, an engine cleaner from Ford in Wiltshire, with his wife Emily aged 22 who was from Thornbury.

In 1874 Henry had lived at 31 St Mary Street.  Please click here to read more about him and his family.

Edwin John Salmon.  By 1899 the owner of the house was E J Salmon.  The 1901 census shows that Edwin J, Salmon not only owned the house, he lived there with his wife and family.  Edwin was a decorator aged 34 and his wife Eliza was 35.   Both of them were born in Thornbury.  At that time they had three children Gladys aged ten, Arthur aged eight and Harold aged two.  Read about Edwin John Salmon 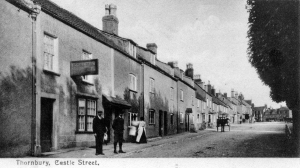 We believe that this photograph on the left shows the house at about this time.  The photograph shows the sign outside the house which was used for the Salmon family’s business.

The 1910 rate book shows that the house was now occupied by Elizabeth’s son William Eddington.

The sale catalogue dated Wednesday 11th July 1917 for an auction by Crossmans solicitors and Luce Young and Alpass Auctioneers has Lot 5 which is described as the “property of Mrs E J Salmon situate on the east side of Castle Street Thornbury in the occupation of Mr William Eddington for £16 0s 0d per annum.  The house contains front and back sitting rooms, kitchen, back kitchen, wash house and coal shed, three bedrooms on first floor and two attics over and a large work shop.  There is a side entrance and gas and water are laid on.  The title to the lot commences with an Indenture of Conveyance on sale dated 28th day of September 1892.”

The catalogue also makes a reference to “the conveyance of the 28th day of September 1892 of lot 5 was made subject to a certain right and liberty of drawing water from a well on the property. The well has long since been sealed down and the right is believed not to have been exercised for over 25 years but the purchaser shall purchase subject to such right as is now existing and shall make no requisition or objection in respect thereof.”

This seems to be a reference to the same well mentioned in the indenture of 1812.

Although the house was advertised for sale the rate book of 1925 shows that William Eddington lived in 42 Castle Street and that it was still owned by Mrs Salmon. Number 42 with girl walking past

We also know that William’s first wife Mabel died in the December quarter of 1922 aged 44.  The records of St Mary’s Church in Thornbury show that at the age of 51 he remarried on 12th November 1927.  His second wife was Rose Fry aged 52, who was a spinster and the daughter of William Fry a farmer.  Sadly Rose did not live very long and died in the September quarter of 1929 aged only 54.  William’s third wife was Elizabeth James whom he married in the June quarter of 1937.

The electoral register shows Elizabeth Eddington lived there in 1965.  We understand that she took in lodgers and it is possible that the Salters  (see above) were lodgers.

The  photograph on the left shows the house in 1972.  It appears to be in quite poor condition at this time but the two doors are still clearly visible.  There appears to be another roof immediately behind the main roof which looks like a large extension.  We would be very interested to hear more about the layout of the original house. 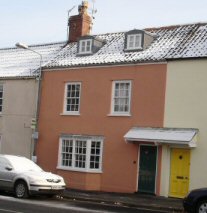 There is no entry for the house in the 1975 directory.  It is possible that this around the time that the house burned to the ground and was almost completely rebuilt by Brian Vizard.  See the site of the burned house in the photograph from the newspaper in 1972.

The photograph on the right shows that when the house was rebuilt the extra doorway to the well was no longer needed.

The electoral register of 1980 shows Brian and Diane Vizard.  Diane will be remembered by many people in Thornbury.  She attended Thornbury Grammar School and played an active role in Thornbury activities all her short life.