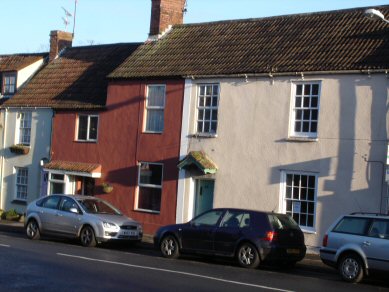 At this stage we  know little about the history of the house that is now 44 Castle Street in Thornbury before the Tithe Survey that was begun in 1837 and was completed in 1840.

The problem of establishing the history of the buildings can be seen by studying the photograph above.  Number 44 is the light coloured house on the right hand side of the photograph.  It shares a roof-line with the very unusual house next door (number 46) which is the brown house on two levels.  Number 46 has two parts the lower of which shares a roof-line with the house to the left, number 48.

Merely by looking at the photograph, it appears that at some time, part of number 44 was separated from the rest of the house and incorporated into an extended number 46.

However we have not been able to confirm this by looking at the deeds.  These date back only to 1858 and make no reference to any boundary changes.  The deeds refer to this house and number 46 as tithe number 286.  The accompanying Tithe Apportionment shows that the property (like the houses that later became 46 and 48 Castle Street) was owned by Thomas Gwynn.

Thomas Gwynn was probably living at Porch House on the opposite side of Castle Street.  He and his heirs continued to own the properties that became 46 and 44 Castle Street until 1903, when it was acquired by the Lloyd family.  Click here to read about Thomas Gwynn

Mrs Alice Lloyd then became owner and was also subject to a fine by the Court of the Manor of Thornbury on May 11th 1904 of a half year’s value on her admittance on the death of her husband Henry Hume Lloyd to the cottages in Castle Street.  The house appears to have been owned by the Lloyd family until 1935.  Read about the Lloyd family.

The occupants of the house before 1935 were:

Sarah Ward. The Tithe Apportionment of 1840 shows that this house was occupied by Sarah Ward.  The 1841 census tells us that she was aged 86 and was of independent means.  She had a servant, Harriet Thurston living in the house.  Sarah was buried in Thornbury on 28th November 1845 aged 91.

John Morgan lived in the house in 1851 census.  John was born about 1797, the son of William Morgan of Thornbury.  William was described as a farmer when John married in 1840 and an innkeeper when he married in 1861.  John himself was a tailor for most of his life.  Later when he married in 1861 he was described as a bailiff and in the census of 1861 as a house agent.  John married Elizabeth Jenkins on 21 November 1822 at Thornbury.  Read more about John Morgan and his family.

John and Mary Rumbold.  A newspaper article of 17th July 1858 has a story about an unwelcome visitor that helps us to identify the next tenant of what is now 44 Castle Street.  Apparently a number of boys frightened a cow being led away from Thornbury Market (then held on The Plain).  It made a bolt for it and ran through the open door of Mr Rumbold, the coachman to Captain Davis of Thornbury Park.  It jumped over the small fence into the garden of Miss Chitts at number 46 and on seeing Miss Chitts in the garden it ran into her upper sitting room.  The cow then tried to get through the window and was only prevented when passers-by closed the shutters.

The 1861 census confirms that the Rumbold family lived at what later became 44 Castle Street.  John Rumbold was then aged 53 and Mary was 37.  Katherine aged 15 was said to be still a scholar, William aged 13 and Anne aged 9 were also scholars.

In 1851 the Rumbold family had lived in a small cottage that later became number 3 Gloucester Road.  At that time John Rumbold was described as a 46 year old coachman from Eastwood Hay in Hampshire.  John was married to Mary, who was 29 and came from Warleigh in Somerset.  They had three children, all born in Batheaston: Katherine aged five, Henry James aged four and William aged three.  On 2nd July 1851 they had two children baptised at St Mary’s Church in Thornbury; Sarah Ann and William.  William was probably the one who was born in Batheaston.  A note on the record indicates he may have been born about 1845.

The 1871 census shows they had another daughter called Lucy, then aged seven.

John Rumbold died in Thornbury in 1875.  He was buried in the burial ground of United Reformed Church.  His memorial says “In loving memory of JOHN RUMBOLD who died June 11th 1875 aged 68 years.”

By 1881 a widowed Mary, now a seamstress, had returned to Gloucester Road where she then seemed to live at what became number 5.  The 1880 rate book and the 1881 census show that  5 Gloucester Road was occupied by Mary Rumbold, a widow aged 54 working as a seamstress.  She was living with her unmarried daughter, Mary Catherine, aged 34 who was also working as a seamstress.  The 1885 and 1887 Rate Books show that Mrs Rumbold was still in the house.

The 1891 census shows that the widowed Mary then moved to Plumstead in London to live with her married daughter Sarah and Sarah’s husband Joseph Corbridge who was a mechanic.

We cannot be certain when Mary died.  It may be her death that was recorded in 1914 in Wandsworth.

George and Mary Power.  By 1890 number 44 Castle Street was occupied by George Power.   In 1891 the census shows that George Power was living in this house with his wife Mary.  George was a gardener.  Their 26 year old son Tom was a groom, Emma aged 11 and Ella aged 9 were still at school.  George Power continued to live in this house until he died on August 18th 1928 aged 79.  Click here to read about George Power

Frederick Gough was the son of John Samuel and Louisa Gough.  He was born in 1896.  The 1901 census shows him aged five years in Littleton with his family.  His father John Gough was a bus proprietor.

The Ancestry website tells us that Frederick Gough served in World War I.  When he enlisted in the Royal Army Service Corps on 12th May 1916, Frederick was a carter from Mumbley’s Farm born in Littleton on Severn and 19 years and 10 months old.  The description says that Frederick was 5ft 4.5 inches, 117lbs, chest 34.5 inches with 3.5 inch range.  Frederick fought in France with the British Expeditionary Force 1916 to 1917.

On 8th October 1921 Frederick (then a labourer in Elberton) married Lilian Ella Power of Castle Street in St Mary’s Church in Thornbury.  Lilian was born in Bristol in 1901 and she was the daughter of the previous tenants George and Mary Power.

The Western Daily Press of 2nd March 1935 advertised the sale of the estate of the late Mrs Lloyd.  The property was said to be in the occupation of Mr Gough and was one of a row of three houses with a shop in Castle Street.

They seem to have moved from Thornbury by 1946 as they do not appear in the electoral roll for that year.  However the FreeBMD website shows that Frederick died in the Thornbury area in 1960 aged 64.  Lilian died in 1969 aged 68 in Bristol.

Thomas and Alice Nelmes.  The register compiled in 1939 in the advent of war shows that the houses was occupied by Thomas Nelmes a butcher’s salesman born on 13th January 1991 and his wife Alice who was born on 19th July 1889.  Also living in the property at that time was a widow called Alice Gale who was born in 1848 and described as ‘incapacitated ‘.

Thomas Nelmes was the son of Edmund Nelmes a labourer and his wife Ellen .  Thomas was born in Hill and he was shown there with his mother and father in the census of 1991.  The 1911 census shows that he had moved into Thornbury and was lodging with William John Williams at 1 Castle Street.

On June 19th 1917 he married Alice Gale the daughter of Stephen Gale (deceased) who had been a postman.  Click here to read more about Stephen Gale.  Thomas and Alice continued to live in Castle Street.  In 1916 Thomas applied for an exemption from service in World War I.  From this we learn that  he was then aged 27 and engaged in slaughtering and farm work.  He had been employed by Parsons Brothers in the High Street for ten years.  We know little about what happened to the application for exemption or any subsequent army career but there is a note on his records that in May 1918 he was awaiting a medical examination to see if he was fit to go into the army.

Alice died on June 19th 1948 aged 62 years.  Thomas’s address was still 44 Castle Street when he died on 7th April 1955.  Probate of  his will was granted to Edmund Nelmes retired labourer.  Both Alice and Thomas are buried in Thornbury Cemetery.  After Thomas’s death the house was put up for sale.

Beatrice and Arthur Brimson lived at number 44 Castle Street in the 1954 electoral roll.  They may have lived there as early as 1950 when they appeared in the electoral rolls.  Arthur Brimson had married Beatrice Mountstevens.  Arthur Henry Brimson was the son of Joseph Henry Brimson and Louisa Margaret nee Boyce.  He was born in 1910 in Bristol.  We were told that Mrs Brimson worked for the Davidsons and the Rawstones.

Arthur died in 1982.  Beatrice Brimson died in Alveston in 1993 aged 86 at Vattingstone House.

Lambert Eardley-Wilmot.  An indenture of 25th August 1955 conveyed the house from Florence and Louisa Riddiford of Pine Croft Alveston to Lambert Eardley Wilmot of Parsonwell, Littleton on Severn, a civil servant.

The 1901 census confirms that Lambert Eardley Wilmot was born in India.  He was aged seven at the time of the Census and living in Cranbrook in Kent with his mother Agnes aged 42 who was also born in India, brother Percy aged 14 and sister Eleanor aged 11.  By 1911 the family lived in Bexhill.

Lambert served in the First World War from 1914-1920.  In 1914 Lambert served in the 2nd Battalion of the Leicestershire Regiment and then became a Lieutenant in 12th Squadron of the RAF.  In August 1928 Lambert landed at Tilbury from Port Said on the “Oxfordshire”.  At that time he was a Flight Lieutenant in the Royal Air Force aged 36.  In June 1930 aged 37 he arrived in London from Burma via Port Said and in the same year on July 14th he married Angela Clare Vincent of Summerhill House, Castle Connell, County Limmerick in Dunmow in Essex.  Their son Charles Vincent Burgoyne was born in 1932.

Lambert Eardley-Wilmot and his son seem to have moved to Thornbury by 1958 when their names appear in the electoral rolls.  On 25th May 1967 Lambert sold the property to Marian Hester Hill of Seven Stars Old Bath Road.  Lambert died in Bristol in 1987.

In 1955 on July 2nd the house was advertised for sale as a stone built terraced house with a front sitting room, living room, two bedrooms (and a “landing bedroom”), underground cellar, coalhouse and washhouse.  It was said to have a large garden and said “vacant possession on completion” which usually implies that the house is empty or very soon to be so.  It was to be auctioned on 22nd July 1955.

Peter and Roslyn Dennis.  On 5th December 1975 Alfred Vernon Hill of 44 Castle Street and Edward John Edmonds of Pak View in Stroud sold the house to Peter Sproson Dennis and his wife Roslyn Naomi of Rydens Avenue, Walton on Thames.