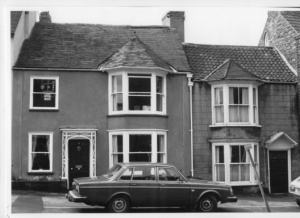 Up to the 1851 census the only known occupants of 5 Castle Street in Thornbury (the house on the right on this photograph) were also the owners.

These occupants included Deborah Green, William Pitcher and Margaret Pitcher and more details of all three are available on the page which describes the owners of 5 Castle Street.  There then came a period up to the early twentieth century when the house was occupied by tenants and the earliest known of these was George Gerrish.

George Gerrish.  By the 1851 census the occupant of this house was George Gerrish aged 26 a solicitor’s general clerk from Bristol with Sarah his wife aged 26 from Bristol and their 9 months old son George born in Thornbury with a young house servant.  Read more about George and Sarah Gerrish

Mary Leonard.  The 1861 census shows Mary Leonard aged 68 a retired farmer’s wife born in Berkeley.  We believe this is Mary Nelmes who married George Leonard on 10th Oct 1814.  Mary and George Leonard farmed 20 acres at Clapton.  They had at least three sons John, Thomas and George.  This would make her the sister of Sarah Nelmes who married Robert Hawtin, schoolmaster at the Free School.

The 1851 census shows that Mary and George Leonard had a son John Henry aged 25.  The household also included a niece Mary Ann Hawtin aged 24, Mary Clutterbuck aged 27, a dairymaid and three farm labourers.  George Leonard died 1st August 1852 aged 66.  He was buried in the churchyard of St Mary’s Church in Thornbury.  Mary died November 21st 1861 and was buried with her husband.

Misses Cornock.  By 1867 the rate book shows the ‘Misses Cornock’ were occupying the house.  The 1871 census shows that the house is occupied by only one person.  This is Agness (or Anna) Frances Cornock aged 47 a spinster aged 47 whose income is “3rd share of income from 62 acres” from Shipperdine.

We have been told that Anna Frances was the youngest daughter of Nicholas Cornock of Shipperdine and Mary Comely of Cowhill.  She was born April 1st 1820 and died at Castle Street in June 1879 and was buried at Oldbury.  Her two sisters Ellen and Mary lived at 20 Castle Street and were looked after by their niece Eliza Linke Cornock in their old age.  Those three each had a third share in the 62 acres at Shipperdine.

We believe that between 1871 and 1876 Frances Cornock moved out of 5 Castle Street into number 13 Castle Street and that this is where she probably died.

In 1879 on 26th June there was a report of the death of Hannah (or Anna) Frances Cornock in a newspaper which appears to confirm the closeness of the family.  The article says

“On Tuesday last, a very sudden death took place at Thornbury. Miss Hannah Frances Cornock a lady of independent means was found dead by her sister who resides near her. When found she was seated in a chair in her sitting room and close by were some articles which she had apparently been mending. The deceased lived a very retired life and was noted for the pride she took in the management of her household. She generally visited her sister who lives opposite and lunched with her, and not coming as usual Miss Cornock went to her sister’s house and found her in the position described. Latterly she has complained of pains in her stomach and at her heart and frequently expressed her conviction that her death would be a very sudden one.”

Another sister Emma Neale Cornock was the eldest and she married Henry Weeks of Thornbury but there is some mystery about her.  According to a family story she married against her father’s wishes and so did not get any share in the 62 acres.  The 1851 census shows that Emma was living at 32 Castle Street.  The census says she was a married lady and aged 42 but unusually she is said to be “supported by her father.”  She has a 12 year old son Morris who is an errand boy, a daughter Mary aged 9 “at home,” Pamela aged 5 and Fanny 4.  At this time we have no trace of the marriage of Emma and Henry Weeks, who was a publican at the Cock Inn in the High Street, neither do we have any trace of Henry Weeks after the 1851 Census.

Another family anecdote was that Nicholas Cornock threatened to shoot any of the young lads of Oldbury who dared to come courting his daughters.  To test his resolve some of the young men stuffed a dummy and set it up in a tree in the orchard then took cover and called wooingly to the daughters.  Sure enough the old man came out with his blunderbuss and peppered the dummy with shot.  Another family story has it that the three spinsters used to put up the shutters and go home to their father’s farm at Shipperdine for Christmas.  It was the tradition to put up the shutters when someone died in a house – and once the young wags of Thornbury wrote in the dust on the window, “not dead but gone to Shipperdine“.

Perhaps the eldest daughter having made an unsuitable alliance, the old man was determined that the younger girls shouldn’t make the same mistake.  For whatever reason the younger sisters all ended up as spinsters.

John Allen.  The 1881 census shows that  John Allen aged 39 a bootmaker from Tortworth was the tenant of the house.  His wife was Elizabeth aged 35 a dressmaker.  They had Edith at school aged 7, William aged 11 and the twins Amy and Arthur at 7 months.  We know that the Allens still lived in this house in 1883 because the Bristol Mercury has the advert of the property for auction on Saturday 27th Jan of that year.  The description of this lot 2 was

“A compact Dwelling house situate to the West side of Castle Street in the town of Thornbury containing sitting room kitchen scullery panty underground cellar and three bedrooms with attics over. There is a small garden at the back and a rainwater cistern and a pump on the premises. This lot is in the occupation of Mr John Allen a yearly tenant at £12 a year.”

Phoebe Ricketts.  By 1885, or more likely about the time the house was sold to Phoebe Ricketts, the Allen family moved to number 3 Castle Street.

Eliza Young.  On the death of Phoebe Ricketts in January 1902 the property was left to Hannah Hodges.  In March 1903 ownership of the house was officially transferred to Hannah but at that time the house was occupied by ‘Mrs Young’.  The 1905 Rate Book shows that this was Eliza Young.  By 1911 the census appears to show that Eliza Young, a widow aged 85 was sharing the home of Annie Comely a single lady farming in Morton.  The census describes her as a companion.  If this is the Eliza young who was living in Castle Street, she died on 27th March 1912 at Morton.

After this time the house was mainly occupied by people who actually owned the property.  Click here to read more

However at some time the house seems to be divided into two.  The electoral roll of 1958 shows that Dorothy and Leslie Taylor lived at 5 Castle Street.

By the 1975 electoral register there are two households living in the house; Alice Gill and Hector Gill at 5a and Christine Thomsen at 5b.

go to the history of this house