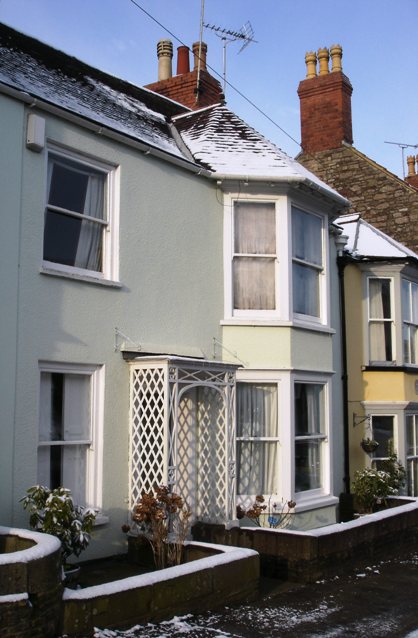 The only indication we have at this stage of the earliest ownership of number 5 Castle Street in Thornbury is a mention in the deeds of the fact that when William Pitcher raised a mortgage using the house as security in 1779 it was part of a property previously occupied by Deborah Green.

At this time we know no more of Deborah Green, although Scribes Alcove Website shows that a Deborah Green was buried in St Mary’s Churchyard on 27th September 1715.  This is likely to be the same Deborah Green who was baptised at the age of about 20 on 14th August 1706.  Her father’s name was given as John Green.  John seems to have died in 1705.

William Pitcher – the owners of the house next door which is now known as Dot Cottage have deeds dated 1768 and 1771 which refer to William Pitcher, a tailor as the occupant of this house (number 5).

We also know that in 1784 William Pitcher a tailor was involved in a dispute about who was the owner of a considerable amount of land which was connected to what is now Thornbury Cottage.

An indenture in the deeds of number 5 Castle Street dated 26th September 1808 between Ann (or Hannah) Barton of Starvall in the parish of North Nibley relict of Richard Barton late of Starvall yeoman and William Pitcher a tailor of Thornbury explains that William Pitcher was the owner and occupier of the house.  It says that from 22nd April 1779 he was using the house as security for a mortgage, firstly from George Cossham, a carpenter, then from Richard Barton and after that Richard’s widow, Ann (or Hannah) Barton.  The indenture yet again transfers the mortgage this time to George Rolph.

A second indenture of November 1816 transfers the mortgage from William Rolph as the trustee of the late George Rolph to William Taylor of Littleton, providing he takes out fire insurance to protect the security.  By this time the mortgage has gradually risen to £170 still outstanding.  In the third and last indenture in this sequence, dated 23rd October 1819, the amount owed (£170) is paid by Jane Pitcher of Holford “daughter of John Pitcher a tailor” to William Taylor.

Throughout this period the house was owned and used by William Pitcher who was a tailor and married to Jane Bill, by whom he had nine children.  Jane died 9th July 1777 aged 40 a few months after the death of her baby daughter, also called Jane.

The sixth child and third son of Jane and William Pitcher was John Pitcher born on 5th September 1767.  John married Margaret Webster in March 1795.  They had at least two daughters; Jane born 25th March 1796 and Mary Pitcher born 21st March 1800.  John Pitcher died 4th December 1818 aged 51.  He died intestate and on 9th June 1819 his widow Margaret Pitcher had to sign papers of administration swearing that she was the natural and lawful widow and heir to his property, which appears to be worth less than £50.  Click here to read about another property that John was also associated with.

A Rent Roll of Borough Rents paid by freeholders to the Mayor of Thornbury was drawn up between 1807 and 1810.  In this, the owner of the house which is now 5 Castle Street was shown as William Pitcher but the occupant was said to be Margaret Pitcher.  It would seem possible that Margaret Pitcher was a resident of the house before William Pitcher died but the records are not accurate enough to be sure.  It is also difficult to explain why Margaret would be shown as the tenant of the house while her husband was still alive.

The Tithe Map of 1840 shows the house as plot number 40 now both owned and occupied by Margaret Pitcher, the widowed daughter in law of William Pitcher.  It seems possible then that the Jane Pitcher who paid £170 mortgage to William Taylor in 1823 was William’s own grand daughter and the daughter of Margaret.

Margaret was buried in the Churchyard of St Mary’s Church in Thornbury with her husband John Pitcher.

The conditions of sale of this property which took after the death of Henry Knapp explain that the title to it commenced with an indenture dated 21st March 1849, the year of the death of Margaret Pitcher, made between Mary Pitcher of the one part and Henry Knapp of the other part.  The indenture in question makes it clear that Mary Pitcher was the grand daughter and heiress of William Pitcher who died intestate.  Mary Pitcher’s address at this time was London Road in the parish of St Catherine’s in Gloucester.

Henry Knapp was related to Margaret Pitcher and her family through his mother who was born Elizabeth Pitcher the daughter of Daniel Pitcher and he is described in the indenture of March 1849 as her kinsman.  Henry was baptised on 1st March 1820 and he was the son of William and Elizabeth Knapp.  Henry continued to own the house for the remainder of his life.  On December 16th 1882, soon after the death of his wife, Henry Knapp died.  Click here to read more about Henry Knapp

The will of Henry Knapp named Mark Savery a blacksmith of Thornbury and Samuel Mullett Wilmot of Grove Cottage Cumberland Road, Bristol.

The Bristol Mercury has the advert for the auction of the property on Saturday 27th Jan 1883.  It mentions Henry Knapp’s own house on the east side of Castle Street with a bay window, stabling and “both sorts of water.”  Number 5 Castle Street was a less grand affair.  It was described as Lot two –

“A compact Dwelling house situate to the west side of Castle Street in the town of Thornbury containing sitting room, kitchen, scullery, pantry, underground cellar and three bedrooms with attics over.  There is a small garden at the back and a rainwater cistern and a pump on the premises.  This lot is in the occupation of Mr John Allen a yearly tenant at £12 a year.”

Phoebe Elizabeth was baptised on 28th September 1814 and was the daughter of William Knapp and Elizabeth nee Pitcher.  Phoebe married Thomas Ricketts at St Pauls Church, Bristol on 19th March 1836.   Thomas was a trustee of the British School and a cooper.  He appeared in the Trade Directories between 1842 and 1877.  Thomas and Phoebe had lived at 13 High Street since the time of the the 1840 Tithe Survey.  The 1841 census shows Thomas Ricketts was a cooper aged 25 living with his wife, Phoebe also 25.  They were living there with Eliza Cornock aged 7 and Henry Watts, a cooper’s apprentice aged 13.  The 1851 census shows Thomas was a cooper aged 40 from Rockhampton.  Phoebe was aged 36 born in Thornbury.

The rate book of 1885 confirmed that the house now known as 5 Castle Street was owned and occupied by Phoebe Ricketts.

In the 1891 census Phoebe Ricketts was aged 76 and still lived with Hannah Hodges, then aged 38.   The 1901 census shows that Phoebe Ricketts was an 84 year old widow living on her own means and born in Thornbury.  She was living with her niece Hannah Hodges who had been born in Llantilo Glamorgan.  There was also a domestic help, Mabella M Liddiatt from Thornbury.   The 1896 voters list shown that Phoebe Ricketts lived in Thornbury but also had property in Crossways.  Phoebe died on 28th January 1902.  Her will made on March 18th 1876 appointed John Crowther Gwynn and Thomas Evans Hignell as executors of her estate.  John Crowther Gwynn renounced probate and confirmed his renunciation on 25th April 1902.  Read more about the family of Phoebe Ricketts nee Knapp.

Hannah Hodges.  On 20th March 1903 Thomas Evans Hignell transferred ownership  of the property to Hannah Hodges.  At that time the property was occupied by  ‘Mrs Young’.  The 1905 and 1910 rate books show that the house was owned by Hannah Hodges, the niece of Thomas and Phoebe Ricketts.  Hannah Hodges died in Thornbury on 14th August 1922 aged 72.  We have no evidence of Hannah living with her parents.  From as early as the 1861 census, at age 11, she was “visiting” Phoebe and Thomas in Thornbury.  The 1911 census shows Hannah had moved to live with her aunt, Elizabeth Ricketts, in Aubern Road, Redland, Bristol.  Hannah’s address was shown as Castle Street when she died in 1922.

In the 1911 census the occupant of this house was 57 year old Sarah Parker who had been married for 35 years but who now lived alone on an allowance from her husband.  Sarah was born in Leeds.

Eliza and her husband Samuel Fudge were the owners of 4 Castle Street and were very well known in the area.  Read more about them.

Eliza Fudge died 27th March 1942 by which time the house was called ‘Glenlyn’.  Probate was granted to Eliza’s son, Hubert Fudge and daughter, Marjorie, as her executors.  Samuel and Eliza’s daughter, Marjorie Kathleen Fudge remained unmarried and she continued to live in 5 Castle Street until her death on 1 February 1957.  Marjorie’s name appeared in the electoral registers of 1946 to 1954 with this address.

On Marjorie’s death the house was left to Hubert and Edna Fudge in trust for their daughters Angela and Judy Fudge who became the owners on 10th June 1964 by which time both girls had become 21 years of age.

Christine Margaret Thomsen became the owner of the house on 1st September 1976.  She had previously been the tenant of the house.  Christine was born in the New Forest area in 1944, the daughter of Alec E. and Edith Margaret Thomsen.   The family had moved to Thornbury by the 1950’s when she attended Thornbury Grammar School.  In 1958 the family were living at Madrona, Park Road.  At school she appeared regularly in the school’s theatrical productions.  Christine became a teacher at the local Roman Catholic Primary School.  She moved away from the house and sold it on 21st November 1980.  Christine died of cancer on 7th October 1985.

Christine will be remembered in Thornbury for the work she did for the Christ the King Roman Catholic Church in Castle Street, including helping to make a series of hangings for the “East” wall (apparently it is actually on the South) to be changed according to the season or feast of the church.  She was also one of the people behind the setting up of Octopus, the group that writes and produces many of the plays in the church hall and the pantomime, not only to provide entertainment but to raise funds for charitable causes around the parish.

The house has subsequently been owned by Angela and Clifford Jones and Jean and Colin Houghton and later Martin Edmonds.

read about the occupants of this house