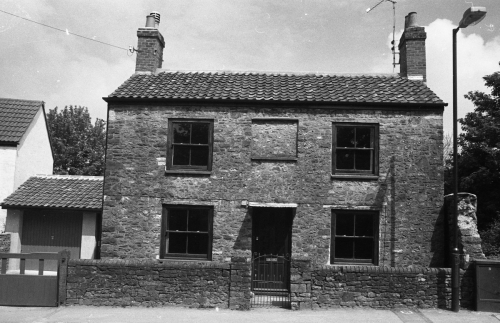 The house that is now 54 Castle Street in Thornbury is interesting because it has been owned by so few families since it was built by John Powell junior between 1830 and 1839.  Read more about the people who owned the property

At first this house was occupied by the people who owned it.  John Powell junior lived there until his death in 1849.  After his death it was occupied by his two nieces Mary Ann and Emma Coleman.  In May 1851 Emma Coleman married Henry Fletcher Carter.  They appear to have occupied the house until some time between 1855 and 1858 when they moved to Alvington near Lydney.  From this time until at least 1898 when Henry died, they let this house out to tenants.

George was the son of John and Hester Maishment.  On 8th December 1851 George Maishment married Elizabeth Carter, the daughter of Joseph Carter, a labourer and his wife Elizabeth. Elizabeth Maishment was therefore the sister of Henry Fletcher Carter who owned the property through his wife Emma.

By 1877 George and his family were living across the road in one of the Stokefield Cottages.  Read about George Maishment and his family

Edwin Bevan.  According to the 1869 rate book Edwin Bevan was paying rates on this property.  However we know it was still owned by Henry Carter.  In 1871 the census showed that Edwin Bevan aged 48 a mason was living in this property with his wife Elizabeth aged 50.  He was still being listed as the tenant in 1876 rate book, but by the rate books of 1878 and 1880 Edwin Bevan lived in 32 Castle Street.  Edwin died aged 62 on 8th January 1887 and was buried in the burial ground of the Congregational Church.  Read more about Edwin and Elizabeth Bevan

William Henry and Elizabeth Spencer.  The rate books of 1880 and 1885 show that William Spencer lived in this property as a tenant of Henry Carter.  In the census of 1881 William Spencer aged 59 a gardener from Wiltshire lived here with his wife Elizabeth who was aged 67 and from Devon.

In the census of 1861 the family had lived at what later became 5 Gloucester Road.  At that time William was aged 39 and a gardener. Elizabeth was then aged 47.  They had three children.  Thomas was aged 10, Emma was seven and Ellen was four.  They may have moved to Thornbury from Alderley where their children were born but before that the census of 1851 shows that they lived in Weston Super Mare.

Their son Thomas Frederick Spencer sadly died a few months after the census and was buried in Thornbury on 29th July 1861 aged 10 years.

By the census of 1871 the family lived at what later became Vine Cottage in Kington Lane.  William was a gardener aged 49 and his wife Elizabeth was said to be aged 57.  They had two daughters; Emma aged 17 was a dressmaker and Ellen aged 14 was a pupil teacher, both girls were born in Alderley in Gloucestershire.  We do not know when they moved from this property into Wellbourne.

Elizabeth Spencer died aged 69 and was buried at St Mary’s Church in Thornbury on 23rd November 1882.  William Spencer was buried there on 27th May 1886 aged 64.

On 3rd December 1887 their daughter Emma then aged 36 married what may have been a relation William Thomas Spencer aged 38 a widower from Dilteridge in Wiltshire.  William was the son of another gardener, John Spencer.  The 1891 census shows that the couple lived at Box in Wiltshire.  William was aged 40 and Emma 39.  They were shown to have a daughter Laura aged 12 by William’s previous marriage.

Miss Spencer.  In 1887 “Miss Spencer” was shown as the tenant of Henry Carter.  Her name was crossed through suggesting she left about that time.  This was Ellen Amelia Spencer a school mistress born in Alderley in Gloucestershire about 1860 and the daughter of the previous tenants William and Elizabeth Spencer.

In 1881 she had been boarding in Littleton upon Severn and her age was then given as 24.  She was a school mistress.  Ellen may have moved into Wellbourne Cottage to look after her dying father.

By the census of 1891 she was a boarder in the High Street with Thomas and Emily Anstey.  The trade directories suggest that she was a mistress at Buckover School in 1889 and 1895.

Thomas Eyles  We believe that Thomas Eyles became a tenant of this house after his retirement which was about 1888.  The 1891 census shows that Thomas Eyles aged 62 and retired from the police force was living with his wife Sarah in what became Wellbourne Cottage.  Sarah was from Littledean in Gloucestershire.  The rate book of 1894 shows that they renting the house from Henry Carter.

Thomas was born in Wotton under Edge according to later censuses.  He may have been the son of a labourer Thomas Eyles and his wife Ann who in the 1841 census lived in Alkington in Gloucestershire.

The 1851 census shows that Thomas was an unmarried police constable in Leigh in Gloucestershire.  Thomas Eyles married Sarah Jones in 1856 in the Gloucester area.  We suspect that she had been married before because the 1861 census shows that the family lived in Cirencester and had four sons the oldest of whom William was aged 11 and born in Little Dean before the couple married.  In this census the couple had three other children George aged three, Walter aged two and Charles aged one month.  The eldest of these three was born in the March quarter of 1856 in Cirencester about the time his parents married.

It appears that Thomas Eyles had been a police sergeant in Thornbury from at least 1878.  In February of that year he gave evidence in court in the case of Hannah Trotman an infirm lady over 80 years of age who was accused of selling cider without a licence in Oldbury.  Despite the plea that she gave away more than she sold, Hannah was fined.

In the census of 1881 as a police sergeant Thomas Eyles was said to be living at the Police Station in the High Street.  The census shows that he had been born in Wotton under Edge and that in 1881 he was 52 years of age.  His wife Sarah was from Littledean and she was 49.  Another policeman William Green was lodging with the couple.  The 1871 census tells us that before the couple moved to Thornbury they had been living in the police house in Castle Street in Cirencester.  In that census Thomas was 42 and Sarah was 39 years old.  In 1871 they had two sons living with them, Walter aged 12 and Charles aged 10.

On the 18th October 1888 the Bristol Mercury reported that at Gloucestershire’s quarter sessions the Chief Constable had recommended that Sergeant Thomas Eyles of Thornbury who was now over 60 years old should be awarded his superannuation in respect of his good conduct.  The Court agreed to this and Sergeant Eyles was awarded 2s 8d per day.

By 1900 the poor rate book shows that Thomas Eyles was a tenant of William Cullimore in Wellbourne Cottage.   The 1901 census confirms that Thomas and Sarah continued to live in this house.   Sarah Eyles died aged 73 and was buried in Thornbury Cemetery on 22nd April 1904.

Thomas’s son Edward married Amy Windsor of Salisbury on December 11th 1903 at Birmingham.  By 1911 the widower Thomas Eyles was living with his son Edward aged 47 and his wife Amy in Leeds in the West Riding of Yorkshire.

Edward and Amy had been married seven years and had no children.  The South Gloucestershire Chronicle of 26th February 1915 announced the death of Thomas Eyles late of Thornbury in Leeds on 21st February 1915.

Sealey The 1905 rate book shows that “Sealey” was a tenant of William Cullimore in this property.  We believe that this may have been Alfred Sealy who later lived at 1 St John Street.

Austin was born in Thornbury in 1881.  He was baptised at the church of St Mary in Thornbury on 6th March 1881.

The census of 1891 shows that Austin Shepherd Cullimore then aged 10 was living with his widowed grandmother Hester aged 70 at the Crispin, a beerhouse, in Mutton Lane (now known as Crispin Lane).  Hester had all four grandchildren at this time Ada aged 19 Laura aged 17 Smart aged 13 as well as Austin.

In the census of 1901 Austin was living with his parents the carpenter, William Cullimore and his wife Francis who were both aged 58.  They were still living at the Crispin in Mutton Lane.  Austin then aged 20 had become a tailor.

On September 11th 1905 at the age of 24 Austin married Rosina White in the parish church of Old Sodbury.  His wife Rosina White was aged 23 and was the daughter of William White a gardener from Old Sodbury.  Before her marriage Rosina had been a servant in the Lloyd’s household in Fairfield House.

We know that by 1907 Austin Cullimore was a tenant of his father William Cullimore and that he was living at Wellbourne Cottage.

The 1911 census shows that Austin Shepherd Cullimore was a tailor aged 29 and that he had been married for six years to Rosina.  At that time Rosina was aged 28 and the census says that she was born in Doddington.  They had one child a daughter Dora Gwendoline Cullimore.

In June 1911 Dora Gwendoline was enrolled at St Mary’s School and the record says that her date of birth was 28th June 1906.  She left the school in 1917 when the family apparently moved to Aldershot.  It is possible that Dora was known as Gwendoline as we note that a Gwendoline D Cullimore married Charles Hill in Stroud in 1930.

Rosina Cullimore died in Weston Super Mare in 1961 and Austin died there the following year in the March quarter of 1962.

After Leonard Smith it seems that the house was again occupied by the people who owned it.

Click here for information about the owners of Wellbourne Cottage.