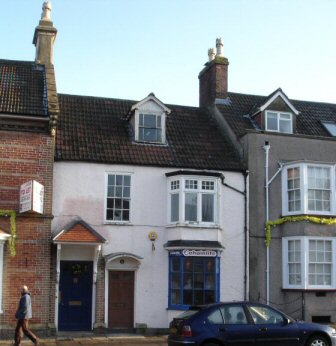 6 Castle Street. In this photograph the building is white

Oriel Cottage, number 6 Castle Street in Thornbury, is an interesting house.  A close examination of the photograph on the left shows that the blue front door of Oriel House (the large red brick building that is number 8 Castle Street) is actually on part of Oriel Cottage, the smaller white house next door.  Oriel Cottage appears from the outside to have two front doors, but only the smaller door actually accesses the building.  The history of the two houses is obviously closely interlinked and at various times both houses were owned by the same person.

The positioning of the door seems to have arisen from the problem of access to the garden behind with a stable and its “garden house or privy situate in the northernmost corner of the said garden.”

When 8 Castle Street was advertised for sale on 7th March 1860 it was specifically noted that that “the stable adjoining and the passage leading to the same now rented with the house are not included in the sale.”

It was stated in an abstract of 1888 that Sarah Beard bought what is now Oriel Cottage AND the “offices garden and outbuildings thereto adjoining and the garden house or privy.” It seems that the stable behind the house had been used as offices by Joseph Young Sturge and he had had an access way to them from the street.  Sarah Beard then had to pay to block up the doorway at the far end of the passageway into the garden so that she had sole use of the stable/office and the privy.

The Owners of the Property included;

Edward Thurston was born about 1728 the son of John and Ursula Thurston.  He married Elizabeth Crowther the daughter of John Crowther on 25th December 1751.

An indenture dated 24th December 1759 shows Edward rented the property at 29 High Street from the Feoffees of the School Lands for 14 years.  Edward was described as a tallow chandler.  The property was described as being ‘all that messuage or tenement called or known by the name or sign of the Lamb now in the occupation of John Longman’.  The rent was set at £5 10s.  We don’t know if Edward lived there himself at this time, but other feoffee records from 1798 to 1805 show Edward was occupying the property as tenant.  He was paying £5 10s in rent per annum.

On 6th November 1841 the house and the other properties that formed Thomas Fewster’s estate were auctioned at the White Hart Inn in Thornbury.  The poster advertising the sale described this cottage as “a neat and substantially built messuage adjoining lot 4 comprising parlour kitchen two best bedrooms and two attics with convenient offices and garden now in the occupation of Miss Smith.”   Miss Smith was Sarah Smith.  Read more about Miss Smith.  The “Lot 4” that adjoined it was of course Oriel House.  We do not believe that the house left the ownership of the Fewster family after the sale but became the property of George Fewster.

George Fewster.  George was born 31st May 1802 and was the son of Thomas Fewster and his wife Elizabeth who owned a much larger property lower down in Castle Street (now called Wigmore House).  George was the third generation in his family to become an apothecary and surgeon and the Trade Directory of 1830 advertises both George Fewster and his father Thomas as apothecaries.

We do not know when or if George Fewster or his father lived at Oriel Cottage but the Abstract of 1888 in the deeds refers to the house as “all that messuage or dwelling house formerly in the occupation of John Oldland, afterwards of Thomas Fewster and George Fewster.”  In this instance occupation probably means that they owned the house rather than that they lived in it.

When Thomas Fewster died George inherited “the entire good will of my practice as a surgeon apothecary and accoucheur” (this is a French term for a male Obstetrician).  After the death of their mother the two children, George and Elizabeth inherited all Thomas Fewster’s property as tenants in common.

It was later agreed that George should buy Elizabeth’s half share of  of his father’s main property,”Wigmores House,” as it is now called, for £825.   The 1841 census shows that George Fewster  lived in “Bank Cottage“ which was further down Castle Street.  By the 1851 census  George had moved into the main property at Wigmore House where he was living alone, except for a servant and a groom.

George Fewster was living in Southampton Street, The Strand, Middlesex by 24th of May 1852 when he purchased Elizabeth’s half share of the “Lion House” in Castle Street for a further £95. The next day George sold the “Lion House” to Charles Prewett of Thornbury, a tailor.

In 1871 George Fewster was lodging in Ilfracombe with Robert and Emily Saule a retired coastguard from Cornwall and his wife.

We have been unable to trace any further information about George Fewster.  Read more about the Fewster family 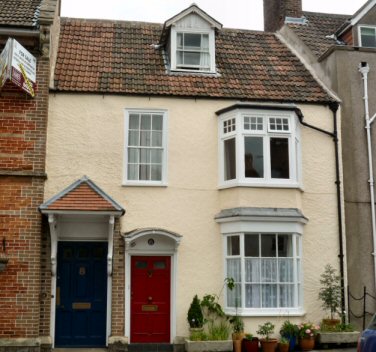 Sarah Beard.  Sarah Beard bought the house on 22nd November 1865.  By her will of 2nd January 1867 Sarah Beard left her “messuage or tenement garden and premises late in the occupation of Robert Jordan and then of Ruth Taylor situate in the High Street of the said Borough of Thornbury which she lately purchased of the Representatives of Elizabeth Fewster deceased unto and to the use of her said niece Ruth Taylor her heirs and assigns for ever.”  Read more about Sarah Beard

Ruth Taylor.  In 1888 Ruth Taylor who had inherited the property on the death of Sarah Beard sold it to Emma Bartlett   Read more about Ruth Taylor

Emma Bartlett was baptised 14th July 1850 and was the daughter of Rhoda and Nathaniel Bartlett.  Read more about the Bartlett family

We know from Mrs Riddiford, a resident of Castle Street that number 6 Castle Street, which was also known as Oriel Cottage, was occupied by Edward and Joan Bryars from the 1940s to around 1980.  Mrs Riddiford said that Edward (Ted) Bryars was a butcher for Trayhurns, a well known business on The Plain in Thornbury.  We understand that Mr and Mrs Bryars rented the property.  Read more about Edward and Joan Bryars

The house was bought by a chartered surveyor, Derek Hardwick, on 11th October 1983 and used as a commercial property.

The house is presently owned by Mr and Mrs Nigel Green who are restoring it as a family home.  The photograph on the right is of the newly restored house and was taken in July 2012.