The later owners of Lion House 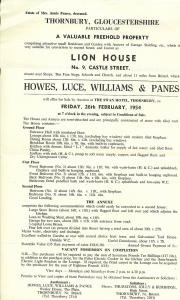 The Advertisement here is for the sale of the Lion House in Castle Street, Thornbury in 1954 after the death of Mrs Annie Pearce who bought the house in 1936.  Click on it if you wish to read a full description of the house.

Annie Pearce – the name of Annie Pearce appears in electoral registers during the period 1936 to 1954 so it would appear that Mrs Pearce lived in the house as well as owning it.

We are grateful for the help of Matthew Riddle who has researched this branch of his family and we have quoted extensively here from his work.  From his information we believe that Annie Smith married Frederick William Pearce in the September quarter of 1889 in the Bristol Registration District.  Her birth was probably registered in the Thornbury District in the March quarter of 1866, although it is not likely she was actually born in Thornbury.

Annie Smith was the daughter of Richard and Emily Smith who had a 75 acre farm at Earthcott Green in the Alveston District in the 1871 census.  In this census Annie was five years old and her birthplace was given as Tytherington.  We know from the register compiled in 1939 in readiness for the outbreak of World War II that Annie was born on 6th February 1866.

She married Frederick William Pearce on August 15th 1889 in Bristol.

The 1891 census appears to show that Annie was living in Henbury with her husband Frederick William Pearce who was born in Henbury.  He was 26 and she was 25 years old.  In this census Annie’s birth place was given as Tytherington.  By 1891 they had a daughter Vera who was two months old.  They seem a fairly prosperous young couple and they had three servants in the household.

The 1901 census shows that the farm in Henbury was called Campbell Farm.  This is probably not very far from what is now junction 18 on the M5 motorway!  Annie was living there with her husband, her daughter Vera, now aged 10 and four sons, Frederick Reginald aged 8, Ivor Cyril aged 6, Lionel Roy 2 and Cedric Richard 1.  They have one 19 year old servant Mary Thorne.  It is noticeable that in this Census Annie’s birth place was Olveston.

Mr Riddle tells us that at least one further son was born in January 1906.  This was James Leslie Pearce whose birth was registered in Thornbury in the March quarter of 1906.

In 1935, at the time of her husband’s death the family were living at Brent Knoll House, Cribbs Causeway, Henbury.

Annie Pearce’s move to Thornbury in 1936, when she was about 69 years old, could have been to do with the fact that her daughter and one of her sons were already living in the area.  Annie’s daughter Vera Gwendoline Pearce had married Colin Francis Garrett of Park Farm, Thornbury in 1915.  In 1937 Vera became a widow herself when her husband Colin died aged only 49. In his burial record Colin was described as a farmer who died at Clifton.  He was buried in Thornbury Cemetery on 10th December 1937.  The register of 1939 shows that Annie had domestic help in the form of Kathleen Read (later Prentice) born in 1912.

Vera died in 1952 aged 61 years old, two years before her mother Annie, who died in 1954 at the age of 87 years old.  Annie Pearce was buried in Henbury Church Yard.

Annie Pearce’s, youngest son (James) Leslie Pearce was a grocer in Thornbury with a shop at 45 High Street and later Thornbury Supply Stores at 5 High Street.  At the time of his first wife’s death in 1936 his address was given as Thornbury High Street, but later he resided in Alveston.  He died in October 1990 aged 84 years old.  His son David James Pearce was the town’s sub- postmaster for many years, running the town’s Post Office from No. 45 High Street, after his father had retired from the grocery business there.  David Pearce died in 2003.

It seems that there were tenants or lodgers in the property about this time.

Leslie Blight – the Western Daily Press of 20th June 1941 says that Leslie Blight then aged 45 occupied Lion House at that time.   Leslie was appearing in court on a charge of stealing four gallons of petrol from his employers the British and Overseas Airways Corporation.  He had given the cans of petrol to a complete stranger who had been complaining that his job of commercial traveller was much hampered by the war time petrol rationing.  Apparently Leslie felt some fellow feeling for this man as he too had once been a commercial traveller and so he gave the stolen fuel to him.  Leslie’s defence solicitor who apparently had known him since their school days said that “of all the fools who have been before the Court probably this man is the biggest.”  He was bound over for 12 months and fined 40 shillings and costs.  By 1950 he and his wife Amy had moved to Sunnyside in Crossways.

We believe that Leslie Blight was probably Leslie Evans Cove Blight who was born in Devon but by the census of 1911 he was living in Bishopston with his father George Blight a commercial traveller and his mother Celia.  He joined the army in 1915 and served in the Divisional Ammunition Column of the Royal Field Artillery.  He apparently contracted jaundice during his time in the army and he also seems to have had shell shock as this was referred to during his trial.  He married Amy Hussey in Bristol in 1933.

Millicent Winter  – in 1950 Millicent L Winter also gives her address as the Lion House.  We know nothing else about this lady. 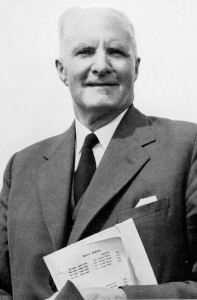 The house was advertised for sale on 26th February 1954.  At that time it had five bedrooms and a bathroom.  We believe that it was bought by William Henry Nicholls.

William Henry Nicholls – The Rate Book for 1955/56 shows that William Nichols lived in Lion House.  William Henry Nicholls became head of the Council School in Thornbury on 1st September 1927.  He was a well known figure and generally known as “Gaffer” Nicholls.  “Gaffer” is a term which was used locally for many of the Headmasters.

Tony Cherry has recently published a book called “History of a School” which details the history of the Council School.  It provides many stories about Gaffer Nicholls who, as was not unusual at the time, was something of a disciplinarian but he was greatly respected in the area and he made a big contribution to the life of Thornbury as well as the education of its inhabitants.

In this book Tony Cherry has described the life of William Nicholls who was born in Wales in 1898 and was educated in Yate and, after serving in World War I, at Bristol University.  William married Kate Holloway in 1928.  Kate later taught at the Council School in Thornbury as well.  Their son William John Nicholls (known as John) was born in 1930 in Thornbury and a daughter Jean was born in 1933.  Both of these children appear in the electoral roll of 1958 in the Lion House with their parents.  “Gaffer ” Nicholls was head of the Council School until 1951 when the new Secondary School was created and he was head of that school for ten years.  Mrs Nicholls retired from the primary school in 1962.

Tony Johnson.  The house was eventually acquired by Tony Johnson a local entrepreneur.  Tony had given up a career as a teacher and had various businesses in Thornbury including an agency for renting villas in Spain, which he ran from an office in Castle Street.  He had three properties in Thornbury, the Lion House and the Georgian House, as well his home in Stafford Crescent.  Tony Johnson moved from Thornbury to live in The Gambia.

Phyllida Parsloe.  The next owner, Professor Phyllida Parsloe bought the house from Tony Johnson and she followed in the tradition of the the owners of the Lion House by becoming Mayor of Thornbury in 2009/10.