The home of the Master of the National School The old School House in Thornbury stands on the opposite side of the road from St Mary’s Church in Thornbury.  The land it stands on was once part of the glebe belonging to the Rectory of Thornbury.

Karen Fill has very kindly sent us a photograph of the School House as it looked about 1905 when it was occupied by the National School master, Thomas Fill.  It is interesting to compare this photograph (see below) with the image here on the right, which was taken from the same angle in 2014. School House about 1905 from postcard

We have not yet seen the deeds of this property and do not know how old the original building on this site was.

The documents held by Christ Church College Oxford include a letter dated 4th January 1859 from Rev Maurice Townsend Stephens who was then vicar of Thornbury.  The letter asked if the Dean and Chapter of Christ Church would grant the land to build a school and a schoolmaster’s house in Thornbury.   It was necessary to obtain the agreement of Christ Church College because this cottage stood on the Glebe, land owned by the College and leased to its tenants to provide an income for the Rectory of Thornbury.  Click here to read more about this complicated arrangement.

However the detailed costs show that there was already a building on this site and that it was being altered to make it suitable for the schoolmaster.

We do not know what this original building looked like but it did appear on the 1840 Tithe Map where it appeared at that time to take the form of three buildings joined together.  The accompanying Tithe Apportionment shows that this building stood on part of the glebe land and that Joseph Limbrick was its tenant.  The plan below of the proposed new school and school house shows the old school was divided into two sections for Girls and Boys. The censuses of 1841 and 1851 show that Joseph Limbrick and his family remained in this house for some time.  They lived here until the house was rebuilt because the rate book of 1862 lists Joseph Limbrick as the occupier.  By that time the property was listed immediately after those owned by the church but it no longer appeared to be considered as part of the Rectory.  Click here to read more about Joseph Limbrick

The plans for the new School and the Master’s House were drawn up in 1859 and the builders tended their valuations.  A local firm called Burchells came up with the price of £957.00, but with alterations to the plans it was brought down to £831.00.  We believe that the building contractor in this case was likely to be Daniel Burchell who built several other notable properties in Thornbury.  Click here to read about Daniel Burchell

We have noted that the costs for re-building make it clear that the original building on the site was to be altered to make it suitable for the school master’s house.  The plans show a substantial three bed-roomed house built in an L-shape.

The rate book of 1867 shows that by that time it was used as a School Master’s House and that it was owned by the Governors of the National School.  We understand from the present owner that the property had been conveyed from Dean and Chapter of the Cathedral Church of Christ Oxford on 3rd May 1860 to the Archdeaconry of Gloucester as part of St Mary’s School premises under the School Sites Act of 1841 and 1844.

The house continued to be owned by representatives of the church as governors of the school for more than one hundred years, in fact until 1977.  Until that the time the occupants were all tenants.  We have found records that show who many of these people were;

Thomas John Golding Fill was appointed head master in 1866, along with his wife Fanny and he probably moved into the property at that time.  The 1867 rate book shows that the Fill family lived in this house and that it was then said to be owned by the Managers of the National School.  The rate books show that the Fills lived here until at least 1918.  Read more

Arthur James and Catherine Matilda Gladwell.  The electoral roll of 1927 shows that Arthur James Gladwell and his wife Catherine Matilda lived in School House.  The register of what is now St Mary’s School shows that Donald James A Gladwell born on 4th December 1920 was admitted to the National School in 1924.  Donald was the son of Arthur James Gladwell living at School House.  He appears to have been born in the Cheltenham area and his mother’s maiden name was given as Haug.  Using this information, we have learned that Arthur Gladwell married Catherine Haug or Hang in December 1916 in the Cheltenham area.

We do not believe that Arthur and Catherine Gladwell lived in Thornbury for very long.  It seems that the family eventually returned to the Cheltenham area although the school records show that Donald left school in Thornbury to move to Cinderford in 1926.  We know that Catherine Gladwell died in 1970 and her son Donald died aged 79 in February 2000.  Both deaths were registered in the Cheltenham area.  Donald Gladwell was employed by the firm of solicitors Bailey & Mcillquham there .

Edward known as “Ted” was the son of Henry Josiah Thurston and his wife Amy.  He was born on 7th January 1894 and brought up at what is now known as Glebe Cottage.

On 22nd September 1914 at the age of 20 Edward enlisted in the army.  At that time his address was the Old Vicarage in Thornbury (confusingly this is the property now known as  Glebe Cottage and not what is now called The Old Vicarage).

His army record shows that he joined the Royal Army Medical Corps.  His medical category was B3.  He was 20 years old and 5ft 6ins with a 33 inch chest.

He was posted to the Northumberland War hospital in Gosforth for training as an operating room attendant.  He may have been stationed at Rochford when he signed the official document which meant he could be sent overseas.  His military history sheets shows that he was in England until 11th January 1917 at which time he was posted to France until 23rd September 1917.  He was demobilised on 22nd August 1919.  The discharge documents stamped 2nd October 1919 show that he was entitled to an army pension and that he was suffering from Neurasthenia.  Edward appears to have returned to his family home at what is now Glebe Cottage and he is shown in that property in the electoral roll for 1921.

Margaret was born Margaret Annie Fidoe in Lindridge in Worcestershire on 11th December 1886.  The 1891 Census shows that she was living with her parents Alfred and Louisa at Lowe Green in Lindridge.  Alfred was an agricultural labourer.  By 1911 she had become a domestic servant and was working in Cheltenham in the household of a widow called Julia Theobald. 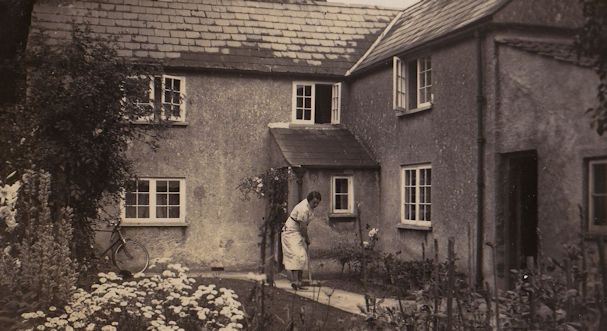 On the right is an image of School House, taken from the side of the property showing how it looked in the 1930s.  It was sent to us by Robin Fidoe, to whom we are very grateful. Although the house has been much modernised it is still very recognisable today.  The lady in the photograph is Margaret Thurston, known as Maggie.

The register that was compiled in 1939 in the advent of war shows that Edward who was a solicitor’s clerk was also a special constable (number 3431).

The electoral rolls for 1931 up to 1965 show that Margaret and Edward lived at the Old School House at the edge of the glebe, yards from his family home until his death aged 72 in 1966.  We have been told that he may have been the caretaker at St Mary’s School.

“Ted’s” probate record shows that he died at School House on 17th January 1966 and that his estate of £2,702 was left to his widow, Margaret.  Margaret died at Ham Green Hospital in Easton in Gordano aged 81 on 3rd November 1968 and was buried in Thornbury on 7th November.

In 2014 the owner has told us that the following people have owned the property and that in 1979 its address was Park Road although by 1996 it had become Castle Street.

Susan Jones.  On 27 October 1977 it was sold to Susan Jones from Alveston.  It was sold by Archdeacon Walter Thomas Wardle of the Archdeaconry of Gloucester with the permission of the Managers of the school and written consent of Secretary of State for Education and Science and the Bishop of Gloucester.  Susan Jones was the first private owner to live in the property that we have been able to trace in the long history of this house.

Susan and Francis John Loader.  On 10 September 1979 Susan Jones sold it to John and Susan Loader.  They also bought from the Church the building the old stable and adjoining yard which had belonged to Glebe Cottage which they converted to School Houses garage.  John was a structural engineer and they were the ones who transformed the house to what it is today.

Stephen Warrilow and his wife Grace Elizabeth.  The Warrilows later bought the house in 1999 and they sold it in 2008.  Stephen was a company director for a management consultancy firm.