Adrian Stokes was the eldest son of Thomas Stokes of Stanshawes Court and his wife Sarah (nee Pritchard).  He was born in the Clifton district of Bristol about 1790.  Adrian’s father Thomas Stokes died November 15th 1808 aged 59.  The family could be described as Landed Gentry and had a coat of arms.  Burke’s Landed Gentry, edition of 1853, says: “The family is now represented by Adrian Stokes, Esq.

[d. 1853], who inherits Stanshawes and some portions of the ancestral property. Arms, gules a lyon rampant double queued ermine.”

We do not know when Adrian moved to Thornbury as there is no trace of him in Land Tax records before 1822.  The family may have had had a home in Kington near Thornbury before Stokefield House was built in Thornbury.  The Bath Chronicle of 25th October 1821 announced the death of Adrian’s mother, Sarah the widow of Thomas Stokes of Stanshawes Court Yate.  Mrs Stokes was said to have died at Kington.

Adrian Stokes married Annis Rolph in Thornbury on May 1st 1816.  Annis Rolph (born July 25th 1794) was the daughter of George Rolph junior.  The “Monthly magazine and British Register” for 1816 describes Adrian Stokes Esq. at that time as “of St James’ Square Bristol.”

Adrian’s mother died October 12th 1821 aged 64.  We have no proof at this stage but it is possible that with his mother’s death Adrian came into his inheritance.  Certainly very soon after her death he seems to have bought a very significant amount of property in Thornbury.  The extent of the property is indicated in an indenture dated 24th December 1853.  This shows that Adrian Stokes had two mortgages each of £1,000 that he raised on property he appears to have acquired about 1822.  The first part was an acre of ground that was bounded on one side by what is now Castle Street and on another by Kington Lane and it was on this land that he built what came to be called Stokefield House.  In the indenture it was described as follows;

“All that paddock piece or parcel of ground formerly meadow or pasture ground situate and being in the town and Borough of Thornbury opposite to a messuage or dwelling house now or late of Mr Joseph Parslow called the Chantry House containing about one acre bounded by the town street on or towards the north east by the hereditaments formerly of Benjamin Smith and late of the said Adrian Stokes deceased and hereinafter granted released and conveyed on or towards the southwest by the high road leading to Kington on or towards the north west and in part on hereditaments formerly of Benjamin Smith and late of said Adrian Stokes deceased and in further part on hereditaments formerly of Daniel Thurston and now or late of James Barnett on or towards the south east or howsoever otherwise the said paddock piece or parcel of ground now is or at any time called now known or distinguished together with all that messuage or dwelling house sometime since erected and built by the said Adrian Stokes deceased on part of the said paddock of ground with the stable coach house and out buildings thereto belonging the remainder of which said paddock of ground has been converted into a garden and pleasure ground. ”

In 1822 the Land Tax records show that he was paying 6/- land tax for a property he owned and occupied.  We believe that this property was the land on which Stokefield House was built.  It is difficult to ascertain how much time he spent at this house.

The house that he built must have once resembled the rather poor photograph that we have here top left.  Later it was bought by Thornbury District Council for offices and a new wing was added.

However, even as as offices, the rather clearer photograph top right shows that it was a substantial and attractive house.  It is difficult to be sure at this stage why he acquired it as he appears to have had other large properties. The other property he was associated with was ‘Stokescroft’, Chestnut Hill in Nailsworth.  The Nailsworth website says

“Adrian Stokes J.P. was a magistrate and before anyone could be taken into custody by the Nailsworth Police and sent to Horsley Prison they had to appear before him. Adjoining Stokescroft a ‘blind house’ was built in 1834. This was a small windowless prison where the ‘drunk & disorderly’ could be lodged temporarily. In 1889 Stokescroft was privately converted to become Nailsworth’s first flats for the elderly. The restoration of Stokescroft took place in 1972.”

This implies that Adrian Stokes lived in Stokescroft at one time.

From 1827 to 1832 the Land Tax records show that he let his property in Thornbury to Caddell Holder.

In 1821 he also acquired from James and Alexander Smith the house what is now called The Priory in Castle Street and the extensive land that was connected to it.  This was described as

“all that messuage or tenement with the carpenter’s shop yard garden and outbuildings thereto adjoining and belonging sometime since in the occupation of Thomas Smith as tenant thereof And also all that formerly a stable adjoining thereto but now converted into a carpenter’s shop And also all those two closes (formerly one close) and called and known by the names of the upper and lower close containing three acres one rood and six perches more or less with a barn now or late the work shop thereon standing or being now or late in the occupation of Thomas Smith which said messuages or tenements closes of ground and other hereditaments are situated in the Borough and parish of Thornbury.”

We know that Adrian Stokes remained in the area as in 1823 he was the Mayor of Thornbury.

It is not clear what happened to Mr Stokes’ financial position during the 1830s but it is possible that he ran into financial difficulties.  By an indenture of mortgage dated 9th January 1835 made with William Rolph and George Cole he raised the sum of £1,000.  Later, in 1839 there was an advertisement in the Gazette for “Stanshawes Court near Sodbury containing about 14 rooms with coach house and stable paddock and fishpond in front lawn and large walled garden rent very low apply Mr Stokes of Thornbury.”  It is possible that Adrian and Annis Stokes merely decided to live in Thornbury rather than Stanshawe’s Court and certainly in 1839 Adrian Stokes was in Robson’s Trade Directory as an Alderman of Thornbury Corporation with amongst others his in-laws, George and William Rolph.

In 1841 he advertised in the Bristol Mercury that ‘To be let furnished or unfurnished – a modern Villa residence, with every convenience for a moderate sized family, and in the best condition, situate within its own grounds, containing altogether five acres and communicating with the High Street of the pleasant and healthy town of Thornbury….’.

The 1841 Census shows him in what appears to be a more modest establishment in Avening.  The head of the household was Thomas Stokes, Adrian’s younger brother.  Thomas was a surgeon aged about 40.  Adrian Stokes was said to be of independent means aged about 50 who was living there with his wife Annis aged 40.  The house had only one servant, Ann Hyde.

In another indenture of mortgage dated 14th April 1843 with Susannah Rolph he borrowed a further £1,000. 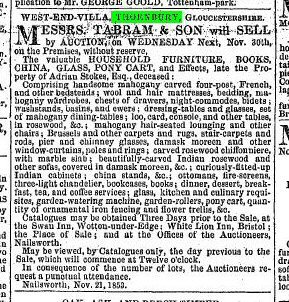 The 1851 Census shows that Adrian was still living in his brother’s home in Chapel Street in Avening in the Stroud district.  Thomas Stokes was aged 54 and a Member of the Royal College of Surgeons and he was born in Bridgewater Somerset.  Adrian Stokes was described as living on independent means and a Justice of the Peace and Landed Proprietor aged 61.  A nephew, Adrian Stokes, aged 35 was also a medical doctor, having obtained his MD in Edinburgh.  Ann Hyde aged 58 was still the servant in the household.

The memorial to Adrian Stokes says that he died “April 21st 1853 aged 65 magistrate of this county and much esteemed for his many good qualities.”  His last will was proved by Thomas Stokes on 4th May 1853.  An indenture dated 24th December 1853 said that Adrian Stokes made his will on 16th June 1848 and bequeathed his land and property to his brother Thomas Stokes with the proviso that Thomas had to pay £100 a year to Adrian’s nephew Adrian Stokes MD and £50 a year each to his nieces Sarah and Annis Stokes.

In 1853 Thomas Stokes, Adrian Stokes, Sarah Stokes and Annis Stokes sold to Sir John Key pieces or parcels of land or ground messuages or tenements for the price of £1,200.  After this transaction William Rolph, George Cole and Susannah Rolph accepted the sum of £1,200 in part payment of the mortgages outstanding.  The second sale detailed in the indenture of 24th December 1853 transferred ownership of what is now Stokefield House, the Priory and two closes of land of “three acres, one rood and six perches” to Sir John Key.  The sale of Adrian Stokes furniture and other goods was advertised 26th November 1853.  This appeared to describe the house as West End Villa.  Please click on the thumbnail image above on the right to see this advertisement.