Thornbury House (as can be seen from this photograph) was a substantial and impressive building just off Castle Street in Thornbury.  When it was advertised for sale in 1900 it had a large dining room, drawing room and library, ten bedrooms, a nursery and the housekeeper’s room.  It also had the servants’ hall, pantry, kitchen etc that one associates with a house on this scale.

In the 1950s the house ceased being used as a private family home and it was acquired by the Sheiling School.  Sadly some time later it was demolished and after 1971 it was replaced by a small housing development known as Warwick Place.

Below on the right there is a small  image of a plan of the property as it was sold in 1900.  Please click on it for a larger image.  It was a very considerable house and with large grounds.  However the property for sale is only that marked in pink.  Sir John Kingsmill Grove Key who inherited the property, as we describe below, appeared to retain ownership of part of his estate at that time.  We believe that Geraldine Mundy who purchased the house and land marked in pink on the plan also bought the remainder of the property, including a house still called Thornbury Cottage.  However we have no confirmation of the details of this transaction.

We know from Kingsmill Grove‘s will that Thornbury House was built by him on the site of what seems to be an inn called The Lamb.  The will, which was written in 1811 said;

“I give and devise all that my said capital messuage or dwelling house by me erected and built with the coach house stable gardens and all appurtenances thereto adjoining and belonging situate in the Town and Borough of Thornbury aforesaid on part whereof a messuage called the Lamb hereinbefore stood which I took down and removed and built the said capital messuage in its stead and which messuage called the Lamb and the garden thereto adjoining I bought and purchased of and from Mr John Salmon deceased and also all that close of meadow or pasture ground heretofore in two closes called the paddocks lying behind the said capital messuage containing about four acres situate in the Tything of Kington in the Parish of Thornbury and which I bought and purchased of Mr William Turton and part of which same close I have taken therefrom and added to the garden ground of such capital messuage with the rights members and appurtenances thereto belonging.”

The list of victuallers drawn up on 18th September 1755 shows all the retailers of alcohol in Thornbury at that time.  It says that the victualler at the Lamb was John Longman.  We know little about The Lamb but there is a document in Gloucester Records Office (reference D866/T8) dated 1759 that says that the Lamb was in the occupation of John Longman, having been previously rented to Mrs Longman.  This property was owned by the Feoffees of the Grammar School and so does not appear to be the same property that Kingsmill Grove bought from John Salmon. Plan of Thornbury House in 1900

We are grateful to the Sheiling School and to Dave Rowley who has been researching the site on which the Sheiling School properties are built for an opportunity to see images of the documents held by the school.  These indentures show that Kingsmill Grove then said to be a paper maker in Bristol bought the property on 27th April 1775 for £100 from John Salmon.  Click here to read about John Salmon

William Raymond.  From this document we are able to learn a little more about the history of the older property that Kingsmill Grove “took down”.  The earliest owner to be mentioned in the indenture of 1775 was William Raymond of Moreton who died intestate on 28th July 1729 aged 56.  It was then passed to his son also called William Raymond.  William Raymond junior married Sarah Lowder of Bristol on 11th November 1731.  The marriage did not last long as William was buried on 26th April 1733.  William bequeathed the house where he was living at the time of his will to his wife Sarah.  We assume that must refer to his property on the site of what became Thornbury House.  He also left her a house in the High Street in the Parish of All Saints in Bristol and his coaling rights in a property in Siston.  The will also makes a reference to his “mother in law” Hester Raymond.  We believe that that this a reference to his stepmother Hester Tayer who married William’s father, William Raymond senior, in 1720.

Sarah Raymond remarried after the death of her late husband William.  Her second husband was Matthew Worgan, whom she married on 10th September 1735.  Matthew Worgan became the owner of the property by his marriage to Sarah Raymond.  The indenture of 1775 cited above refers to this fact and it is confirmed by the Assessments of Poor Rate for 1751 and 1752 which say that “Mr Worgan” was liable to pay four pence tax in respect of “Raymonds”.  This may have been because the tenant William Marsh had died in 1750.

We do not know when Sarah or Mathew Worgan died, although we know that Mathew survived his wife and both had died without issue by 1762.

We have no record that Sarah and Mathew remained in the Thornbury area after their marriage.  The assessment of the poor for 1753 shows that John Mills was liable to pay tax on the property known as “Raymonds”.  We believe that John Mills, who was a mason and his wife Jane were tenants of this property.  We know very little about this couple but John and Jane Mills may have been the parents of Henry Mills who owned 26 Castle Street.

It is noticeable that none of these early records suggest that it was an inn nor do they refer to it as The Lamb.  In 1762 it was said to be

We know very little about William Marsh who died in 1750.

John Salmon was the owner of this property from 1762 to 1775.  John Salmon and his wife Ann nee Ann Stokes were associated with several properties in the area including that in Silver Street. They later lived at the Old Farmhouse in Alveston.  Read more about John Salmon

Kingsmill Grove bought the property on 27th April 1775 from John Salmon.  As explained earlier, he later “took down” this property and built what became Thornbury House.  The name of Kingsmill Grove was connected with the house for the rest of his life, although his business interests were in Bristol.  After his death it passed to his wife, Susannah and then his wife’s niece Mary Ann and her husband John Key and to their heirs.  This family owned the house until it was sold to Geraldine Mundy in 1900.  Read about the Grove and Key families

Major Charlewood.  For at least part of the time that the Key family owned the house it was rented out to other people.  The 1861 census shows us that the occupant of Thornbury House was Major John Charlewood JP aged 52 a retired army major aged 52 from Staffordshire.  His wife was Catherine Charlewood from Wiltshire aged 44.  They had a daughter Catherine aged 12 and born in Hampshire.  There were three servants living in the house.

The Charlewood family had moved from Alderly where they were living in the 1851 census.  At that time John was a captain in the army and they had two children, Charles aged four and Catherine aged two.  By 1871 they had moved to The Elms in Alveston.  They had a grandson Charles aged one living with them as well as their daughter Catherine.

John Charlewood died on 10th September 1890 leaving his widow to prove the will with the help of Francis Charlewood Turner of Finsbury Sq in Middlesex and Edward Philips Charlewood of Manchester the nephews.  His estate was valued at £12,898 18s 1d.

Evelyn Gillett.  After the death of Geradine Mundy in 1911, Thornbury House was occupied by the Rev Hugh Gillett and his wife Evelyn who was the niece of Geraldine Mundy.  Read about the Gilletts 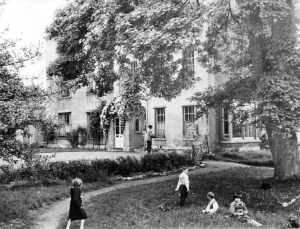 The Sheiling School at Thornbury House in the 1950s

Arthur Bassam.  The name of Arthur Bassam appears as the occupant of Thornbury House after 1935.  The register that was compiled in 1939 in the advent of war shows that Arthur Bassam was born 6th December 1882 in Bermondsey in London and that he was a butler in domestic service.  Also in the household in 1939 were Lily Giles (later Lily Organ), who was the cook, Fanny Baldwin (later Fanny Aslett) the housemaid and Beryl Taylor a ladies maid.  Lily Giles seems to have later joined the Women’s Land Army.

Algar Howard.  The Western Daily Press of November 19th 1937 shows an advertisement placed by the Hon. Mrs Howard for a housemaid.  This is significant because the advertisement gives the lady’s address as “Thornbury House”.  It would seem that the Algar Howard of Thornbury Castle and his wife went to live in the property some time after 1935.    Click here to read about Algar Howard

On 31st July 1948 the Western Daily Press advertised that Thornbury House would be sold by auction at the Grand Hotel in Bristol.  At that time it was bought by Richard Poole as a hostel for St. Christopher’s School in Bristol.

In 1950 the names of Ciceley Winder and Eleanor and Richard Poole appeared in the electoral roll as living in Thornbury House.  We understand  that the Rev. Richard Poole and his wife Mary had acquired the house as a hostel for children attending St Christopher’s School in Bristol.

We have been told that Dr Karl Konig’s wife, Tilla founded a specialised nurse training at nearby Thornbury Park living with and caring for children with severe cerebral palsy.

We believe the house was demolished in the early 1970s.