The three cottages that adjoined the Exchange 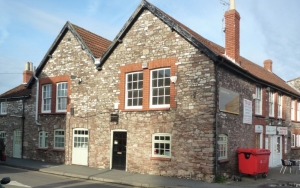 This  photograph shows the group of buildings on the corner of Chapel Street in Thornbury.  Although now a single property known as ‘7 Chapel Street’ and for many years used by an opticians business, it has been used by up to three separate businesses at various times throughout its history.

We’re grateful to Meg Wise of Thornbury Museum who has shared with us her collection of deeds relating to The Exchange and the neighbouring properties.  We think that prior to 1776 the history of this property is connected to that of the adjoining building now occupied by Shelly’s cafe.

Until that time it seems that there was one property on the site bought by Robert Caddy at that time.  It was described as ‘a messuage with barn, stable and ground in the upper end of the Back Street, otherwise St Mary Street’.   By 1817 Robert appears to have developed the property by erecting the group of buildings which are still there today.   He divided the property by erecting a wall across the yard in the rear.  Robert sold part of this property to Daniel Pitcher.

Robert sold this part to Thomas Walker the younger, a butcher.  Click here to read about the earlier history of this property.

Thomas Walker – Thomas was a butcher.  We suspect that Thomas was the Thomas Walker born on 29th September 1774, the son of Thomas Walker, a butcher and his wife, Hannah (nee Knott).  He was baptised on 13th January 1775 and was their first son and second child.  On 22nd July 1799 Thomas married Celia Wiltshire, a widow, in Thornbury. Celia Machin had married Thomas Wiltshire on 15th May 1793 and he died aged 32 and was buried on 24th August 1796.  An inquest was held into his death which found that he fell or was thrown from his horse at Falfield.

We note that Thomas’s father, Thomas Walker snr was living in 59 St Mary Street from at least 1812 to his death in 1821.

On 25th March 1817 Thomas bought the property on the corner of Chapel Street and St Mary Street.  It was described as the house in which Thomas was already living with a barn and slaughter house and the adjoining house occupied by Jane Banks on the west side.  Thus, Thomas Walker was living in the house on the corner of the plot of Chapel Street and St Mary Street.  Jane Banks was living in the house to the west, between the house of Thomas Walker and the slaughterhouse.  We are not sure if the slaughterhouse was in the small building at the end of the row or whether this was purely an entrance to the yard and slaughterhouse in the rear.  Interestingly the area on Chapel Street, currently the side entrance to The Knot of Rope, was described as ‘An Old Garden belonging to the Mayor and Corporation’.

From 1828 onwards the records show that Thomas was a tenant of Robert Hopkins.  We also know that in 1833 Thomas was renting out a paddock of land from William Taylor.  The land tax records show that his father had been renting this land as early as 1783 and 1784.  This was behind 2 – 8 Upper Bath Road.  Click here to read more

We believe that Thomas Walker died aged 63 and he was buried in Thornbury Churchyard on 17th September 1835.  The 1840 Tithe Apportionment shows Celia Walker was occupying the house, yard and slaughter house, which was all owned by Robert Hopkins.  John Trayhurn was occupying the other part of the property, previously occupied by Jane Banks and then Thomas himself.  The 1841 census shows Celia was a butcher aged 70 living with her sons, James aged 35 and Samuel aged 30 who were also butchers and Ann aged 35.  We cannot find the baptism records of any of these children in Thornbury.  Celia died aged 81 and was buried on 19th January 1848.

Robert Hopkins – on 12th July 1823 Robert bought the property from Thomas Walker, although Robert appears to have allowed Thomas to continue to occupy the premises.   At the time of the 1840 Tithe Survey the property covered two plots, 148 and 149, both owned by Robert Hopkins.   Plot 148 was described as two houses occupied by Celia Walker and John Traherne (Trayhurn).   Plot 149 was the plot furthest towards the High Street and it included a yard and large building in the rear.   This plot was described as a slaughterhouse and yard occupied by Celia Walker.

Robert Hopkins was a tailor.  He was born in Littleton on Severn on 6th August 1786 and baptised in Thornbury on 27th December 1786.  His parents were Robert Hopkins and his wife, Sarah (nee Hopkins).  On 3rd December 1840 Robert sold the property to Thomas Morgan for £100.  The 1841 and 1851 censuses show Robert was unmarried and lodging with John Maishment, another tailor, in St John Street. Robert died aged 75 and was buried on 16th December 1860.

Thomas Morgan and Eliza Tanner – Thomas Morgan bought the property on 3rd December 1840.  Thomas had acquired a large number of the properties in this area of town and at some stage he converted the buildings adjoining the corner of Chapel Street and St Mary Street into three cottages.  When Thomas made his will on 17th September 1869, he left the three freehold cottages in Rotten Row (Chapel Street) to his daughter, Eliza Tanner.

Sarah Kiddle – Sarah inherited the three cottages under the will of Eliza Tanner following her death on 7th June 1884.  Under the terms of the will Sarah had to pay £19 19s to Mary Ann Prewett, the daughter of Joseph Prewett of Thornbury.  She doesn’t appear to have ever lived in the property.

Sarah was the daughter of Alfred Burchell and his wife, Ann who was another daughter of Thomas Morgan (see above).  Sarah Burchell married James Kiddle in the Clifton area of Bristol in 1873. James was a druggist and chemist born in Gloucester.  In 1881 James and Sarah were living at 39 Egerton Road, Horfield in Bristol.  They had two sons, Alfred aged 6 and William H aged 2.  On 8th November 1894 Sarah Kiddle sold the three cottages to Richard Hobbs Smith for £100.

Richard Hobbs Smith and The Exchange – on 8th November 1894 Sarah Kiddle sold the three cottages to Richard Hobbs Smith for £100.  Richard had acquired several properties in the area around ‘Michaels’ public house on the High Street.  He set about extending the pub which he renamed ‘The Royal Exchange’, later to be shortened to ‘The Exchange’ and the cottages were incorporated into this business.   A 1918 plan of the property shows they were then being used as storerooms and harness room connected to the adjoining stables.  Click here to read about The Exchange

The properties continued to be owned by the various proprietors of The Exchange.  In the 1970s the property was acquired by Mr Tucker together with the adjoining property on the St Mary Street frontage (now Shellys Cafe and Christophers Barbers Shop).  Shelly is the daughter of Mr Tucker and her family still owns this building and the adjoining property occupied by the opticians.

Read about the occupants of the property
Toggle Sliding Bar Area