The Mysterious Murders by the Son of Thomas Walker 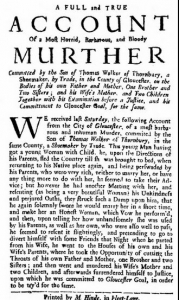 We are grateful to Paul Townsend for finding the following fascinating newspaper article about a man who murdered no less than eight of his family, for no obvious reason.  The article appears on Paul’s excellent website www.bristolpast.co.uk but he has been kind enough to let us copy it for our section on crime in Thornbury.

Sadly this article is undated and we have been unable to find a single piece of information about the family of the fate of the young man who committed this horrible crime.

Unfortunately Thomas Walker is not an uncommon name, although most of the Thomas Walkers we have traced so far have been butchers rather than tailors.  The article does not even identify the perpetrator by name, only as the son of Thomas Walker.  Paul Townsend has found a John Walker in Gloucester Gaol in 1820 and he was aged 28.  The man was a tailor but there is no evidence whatsoever of the crime that he committed.  We have searched the parish records but have not yet found a group of the Walker family who died at much the same date.  The fact that the prison is referred to as Gloucester Gaol apparently suggests that the date is after 1782 when the prison opened, but the style of writing suggests the article was written in the early nineteenth or late eighteenth century.  We would be very pleased indeed to hear from anyone who can tell us more.

Committed by the son of Thomas Walker of Thornbury a shoemaker by trade in the County of Gloucester on the Bodies of his own Father and Mother, One brother and Two Sisters and his Wife’s Mother, and Two Children Together with his Examination before a justice and his Commitment to Gloucester Goal for the same.

We received last Saturday the following account from the City of Gloucester of a most barbarous and inhuman Murder, committed by the Son of Thomas Walker of Thornbury in the same County, a Shoemaker by Trade.  This young man having got a wife with Child, he upon the Direction of his Parents, fled the Country till she was brought to bed when returning to his Native place again, and being persuaded by his Parents who were very rich, neither to marry her nor to have any thing more to do with her he seemed to take their Advice ; but however he had another Meeting with her, and relenting (as being a very beautiful Woman) his Unkindness and perjured Oaths, they struck such a Damp upon him, that he again solemnly swore he would marry her in a short time, and maker her an Honest Woman, which Vow he performed, and then upon telling her how unhandsomely she was used by his Parents as well as her own, who were also well to pass, he seemed to resent it slightingly, and pretending to go to divert himself with some Friends that Night when he parted from his wife, he went to the houses of his own and his Wife’s parents, where he took the opportunity of cutting the Throats of his own Father and Mother, one Brother and two Sisters; and then went and murdered his Wife’s mother and two children, and afterwards surrendered himself to Justice, upon which he was committed to Gloucester Gaol in order to be try’d for the same