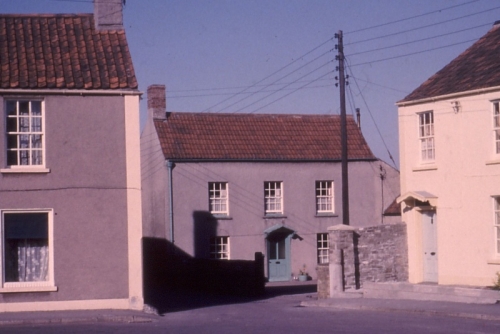 The next family we know to have occupied Crispin House is that of Arthur Thomas and Ethel Higgins.  Click here to read about the previous phase of the property’s history

We were surprised to learn that there is no known connection between the family of Arthur Thomas Higgins and that of Oliver Higgins, the blacksmith who lived opposite.

Arthur was born in Bristol in 1895, the son of Henry and Sarah Ann Higgins.  We are told that he came to Thornbury from Fishponds.  The 1901 Census shows him living in Eastville with his parents.  Henry was an undertaker’s labourer from Pensford.  He had married Sarah Ann Barnes in Bristol in 1890.

Arthur joined the Regular Army in the First World War and served with the Old Contemptibles.  In 1916 he married Ethel Young in Thornbury. 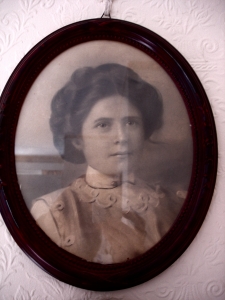 We are a little unsure about Ethel’s early years.  The special register compiled in 1939 in preparation for the war shows Ethel’s date of birth as 4th September 1886.  An Ethel Young was registered in the Thornbury District in the December quarter 1886.  Census records in 1901 and 1911 show that she was born in Berkeley.  We think that there is a possibility that she was the Ethel Leary Young baptised in Berkeley on 30th June 1889.  She was the daughter of Rosina Young, a single woman.  Rosina married Henry Edward Summers, a labourer from Thornbury in 1891.  In the 1891 census ‘Ethel Summers’ is living with Henry and Rosina in Grovesend Lane.  Ethel was aged four and born in Berkeley.

We were told by her daughter that Ethel attended the Council School, where we understand she was in a class using the Quaker Meeting Hall.  By the 1901 census Ethel had left home and she is listed as a 14 year old servant employed by Charles Virgo in Almondsbury.  She was then listed under the name of Ethel Young.

Ethel’s daughter also told us that Ethel went into service at Shen where she learnt cooking skills from Edmund Cullimores’s wife.  The 1911 census confirms she was working as a general domestic servant for Edmund Cullimore at Shen, Thornbury.  She was aged 24 and born in Berkeley.

Arthur and Ethel were employed as porter and porteress at the Thornbury Union Workhouse and they were living in the Porter’s Lodge when their daughter, Amie was born in 1925.  Amie tells us that her mother had to take two weeks holiday to give birth to Amie.  She also has great pleasure in telling people that she was born in the Workhouse.  One of Ethel’s duties was supervising the inmates in the workhouse laundry.   She seems to have been very ambitious and she had the idea of starting her own laundry.

Ethel bought Crispin House in 1926 for £490.  She quickly made a planning application to build an ironing room and ran the premises as a laundry.  The laundry was a success and provided services for the various large houses around the Thornbury area.  The laundry was run by Ethel and she was the driving force in the family.  She employed about three assistants to help her with the work.  Arthur was a fitter employed by by BAC at Filton.

Arthur and Ethel lived in the house for about 30 years.

During this time it seems possible that the Higgins family had lodgers in the property.  The Western Daily Press of 12 April 1934 reported on the funeral of Albert Summers aged 34 who lived at Crispin House, presumably with his wife.  The list of mourners included Norah and Amy Higgins who were described as nieces.  We also note that according to the electoral registers 1935 to 1946 Cecil Victor Pearson was also living in the house.

The special register compiled in 1939 in preparation for the war lists Arthur and Ethel, her daughter Emily N Young and lodger Cecil V. Pearson, a widowed journeyman tailor born on 23rd September 1870.  Arthur was described as a ‘Casual ward Attendant in the P.A.C.’ which was the Workhouse.  Ethel was described as ‘Laundress (Mistress)’.  Emily was an unmarried lady born on 11th March 1906 and described as being ‘Incapacitated’.  There was one other person whose details were ‘blacked out’.

Ethel died aged 59 years  on 3rd January 1947 at the Bristol Royal Infirmary “after a long and painful illness.”  She was buried in Thornbury Cemetery on 8th January 1947.  Arthur arranged to split the property, selling the laundry to Snowline Laundry who continued operating it.  It was still being advertised in the 1951 programme for the Thornbury Flower Show.  Arthur remained in the house with Amie and her family until he died in 1974 aged 79 years.

Ethel had a daughter, Norah, before she met Arthur.  Norah Emily Young lived with Arthur and Ethel in Crispin House for many years.  She died in July 1983 aged 77 years.  Arthur and Ethel had one daughter, Amie Ethel Wools Higgins, born in 1925.  The unusual middle name of ‘Wools’ comes from the surname of Amie’s great grandmother, Flora Wooles.   Read more about Amie Higgins