Thomas Hurley – an abstract of title dated 1883 mentions that Thomas was the tenant of the house owned by George Cossham.  The land tax records show Thomas was living there in 1780 and 1781.   He had moved elsewhere by 1782 and George set about converting the house into two separate dwellings.  Thomas died aged 63 and was buried on 21st September 1791.

Thomas Cole – when the owner of the property, George Cossham, wrote his will in 1785 he described the property as being the one where ‘Thomas Cole doth now dwell.’  We don’t know anything about Thomas, although we note that a Thomas Cole died aged 40 and was buried on 29th April 1789.

John Gibbs – the 1883 Abstract mentions that John Gibbs occupied the property following Thomas Cole.  We don’t know anything about John except he seemed to be living at 71 High Street in 1810.

Thomas Morgan – the 1841 census shows that house was occupied by Thomas Morgan.  Thomas was a chimney sweep aged 26 married to Charlotte aged 23.  They had three children living with them: Frances aged 10, Hannah aged 5, and Mary Ann aged 1.

In the 1851 census Thomas was living in the house with his family.  Thomas was aged 44 (no occupation was noted), his wife, Charlotte was aged 40 and their children were Charlotte aged 8, Sarah aged 5 and Elizabeth aged 2.  The 1861 Census shows Thomas and Charlotte still living in the house in Mutton Lane.  Of their children, Charlotte, Elizabeth, Mary Ann and Alice were living with them.  They also had two boarders living there.  In 1871 Thomas, Charlotte, Mary Ann and Alice were living at 4 Crispin Lane with a grand-daughter, Charlotte Morgan who was aged 8 and born in Bristol.

Thomas died aged 63 and was buried on 21st December 1871.  Charlotte is not listed in the 1876 and 1880 Rate Books which might indicate that she had moved away.  The 1881 census shows Charlotte was now  a widow.   It also indicates she had returned to Crispin Lane, but she appears to be living on the opposite side of the lane at the house which became known as 1 Crispin Lane.  Charlotte was then described as a nurse aged 69.  Presumably she was nursing her grandchildren as four of them were living with her: Charlotte Morgan was now aged 18 and working as a servant, Thomas W Ashcroft was aged 12, Alice Charlotte Ashcroft was aged 8 and Amy Alice Morgan (the daughter of Charlotte’s daughter Elizabeth) was aged 1. Thomas and Alice Ashcroft were the children of Charlotte’s daughter, Sarah, and her husband, Thomas Ashcroft, who were living in one of the two houses adjoining 6 Crispin Lane.

The 1891 census shows Charlotte still living at 1 Crispin Lane but the house had been taken over by the family of her daughter, Elizabeth who had married Albin Prosser.  Counting Charlotte and her grand-daughter Charlotte there were nine people living in that small house.  Charlotte died aged 86 and was buried on 26th January 1898.

Edward Fowler – the 1880 rate book shows that the house was occupied by Edward Fowler. The 1881 census shows Edward was a labourer aged 28 living with his wife, Anna Maria a seamstress aged 28 who was born in Crossways.

The 1876 and 1885 rate books suggest that Edward was living in one of the adjoining houses owned by Robert Sargent.  We don’t know if this is mistake or whether he did skip around between the houses.  The 1891 census shows the Fowlers had moved to live in Crossways.  Click here to read more about Edward and Anne Maria

William Harris – the 1885 rate book shows that William Harris was the tenant.  We believe that this is ‘George’ Harris who was living there.  By the 1890 rate book he had moved to one the two houses which then adjoined 6 Crispin Lane.  Click here to read more

William Bendall – the 1890 and 1894 rate books and 1891 census shows William Bendall living in the property.  William was a labourer and haulier aged 40 born in Thornbury.  He was living in a two-roomed house with his wife, Ann aged 41 from Sherborne in Dorset and their daughters, Mary aged 12 and Hester aged 3.  Click here to read more

Charles Stinchcombe – we have a copy of a 1906 deed which transfers ownership of the property from William Cullimore to his wife, Frances for £150. This mentions that the house is then occupied by a tenant, Charles Stinchcombe.

The 1900 rate book lists Charles as living in 6 Crispin Lane or one of the two houses which adjoined it.  In 1901 Census Charles was aged 30, a carrier living at ‘The Coombe’ in Gloucester Road.  We suspect that this refers to what is now Coombe Cottage, as William Young Sainsbury was living in the house now known as ‘The Coombe‘.  Charles’s wife, Annie J. was aged 36, a laundress in the Workhouse.

The 1911 census shows Charles and Annie were living in 4 Crispin Lane which is described as having three rooms.  They had two adopted children living with them.  Ethel Jago was aged 8 and Albert Sherwood was aged 10, both born in Newport, Monmouthshire.  The Western Daily Press of June 20th 1910 had carried an advertisement from Mrs Stinchcombe for a baby to adopt.

Charles is shown as living in ‘Mutton Lane’ in the electoral registers of 1910 and 1913, but we know from a Gazette article that they had moved to 21 St Mary Street in September 1912.   She was reported as being a witness in an inquiry into misbehaviour in the Union Workhouse where she had worked as head laundress for about 10 years until she resigned earlier in 1913.  In the 1918 and 1921 electoral registers Charles and Annie are listed as living in St Mary Street.

There is another Gazette article in September 1923 showing that the owner of the property, Minnie Eyles, was trying to eject the Stinchcombes from the house.  The Court refused the application, but another article dated 1st August 1925 shows that Minnie tried four times to evict Annie.  She claimed that Annie was in arrears of rent by £4 6s 3d and that she had been guilty of annoying conduct and of using the premises in ‘an untenant-like manner’ with the result that the condition had deteriorated.  Minnie said she wanted to make the property fit for human habitation.

Local builder, P.G. Hawkins confirmed that the ceilings and walls were in a very bad state and the floor in the scullery was damaged.  The court granted in favour of Minnie on this occasion, and the Stinchcombes must have left shortly after as the 1926 rate book shows Minnie Eyles as the occupant.  The 1927 electoral register shows them living in Horseshoe Lane. Charles died in 1931 aged 63.  The report of his funeral in the Gazette of March 21st 1931 says that Mr Stinchcombe and his wife were living in Gillingstool.  He had suffered considerably over several years, but for 34 years he had been employed by Messrs Tucker Bros.  His widow, brother Thomas and sister in law attended the funeral but both of his sisters Mrs Clark and Mrs Brickwood were too ill to attend.

The 1931 electoral register shows Annie was still living at Gillingstool. 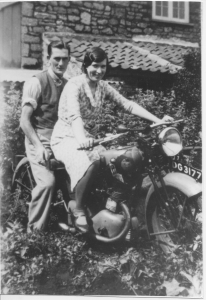 The Wilcox family – Frederick Robert Wilcox and his wife, Doris May, were living in the house from about 1935 and they continued to live there up to the 1970s.  The photo on the right shows them in the back garden of number 4.

Frederick Robert, known locally by the name of ‘Robert’ or ‘Bob’ was born on 5th September 1901, the son of John Robert Wilcox.  Click here to read about the war career of John Robert

Robert married Doris May Bishop at Thornbury St Mary’s Church on 30th March 1929.  Doris was born on 17th November 1904.  Doris’s father Frederick Bishop, a labourer, had died by the time of her marriage.  Robert and Doris had a daughter, June Ivy, born in 1931 and a son, Jeffrey Robert born in 1936.

Robert was a gardener/groundsman at Thornbury Grammar School.  He had been in India for seven years with the 2nd Gloucester Regiment.  The special register compiled in 1939 in preparation for the war describes Robert as a school caretaker.  During the Second World War, he served as a Volunteer with the 6th Gloucestershire (South Gloucester) Battalion, Home Guard.  He was killed in a road accident on 21 September 1940 aged 39 years when he was on his way to duty.  In an incident that was tragically common at the time, he was knocked down in St John Street by a motor cycle being driven during the blackout by Phil Dagger, from number 19 St John Street.  The funeral took place with full military honours at St Mary’s Church and Cemetery.  Members of the Home Guard were bearers and formed a guard of honour on each side of the coffin, draped with a Union Jack.  A firing party of local soldiers fired a volley over the coffin after it had been lowered into the grave and Volunteer H. Phillips of the Home Guard sounded the Last Post.

The family was to suffer further when Robert’s brother, Lieutenant John Arthur Wilcox, was killed after 28 years regular service in the Army.  He took part in the 1914 – 1918 War and campaigns in France in 1939 and Norway in 1940.

After Robert’s death, Doris’ s brother, Ernest Bishop moved in to help the family.  We understand he was known locally as ‘Sonner’.  After Doris died on 21 May 1972 aged 67 years, Ernest stayed on in the house until 1990 when he moved into sheltered accommodation at the nearby Baptist Church.

Go to the history of the house
Toggle Sliding Bar Area