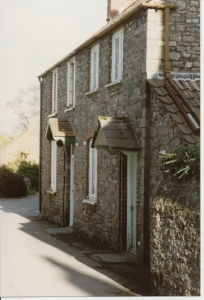 4 Crispin Lane (nearest of the two houses) before the extension 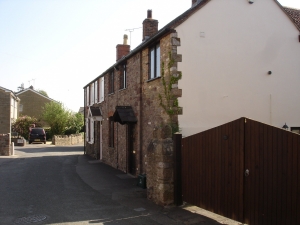 4 Crispin Lane (nearest of the two houses) After extension

The photo on the left was taken in the 1970s before number 4 was extended.  The one on the right shows how the same property has been modernised and improved.

We haven’t yet seen the deeds of this house, although in 2012 we came across an abstract of title dated 1883 which has told us something about the property’s early history.

The two houses, now known as 4 and 6 Crispin Lane and the two other houses known as Crispin Lodge and Crispin Cottage were built on a single plot of land.  We have now traced several earlier indentures which takes the history of the plot to the early 1600’s.  Click here to read more

The history of number 4 as a separate property starts with Thomas Cossham.

Thomas Cossham – Thomas was baptised on 22nd September 1775, the son of John Goodenough Cossham and his wife, Mary (nee Pope).  Apprenticeship records show that Thomas was apprenticed to Jesse Cossham on 21st July 1791 in accordance with his grandfather’s wishes.

We note that the Land Tax records appear to show Thomas Cossham owned both properties (4 & 6) in Thornbury in the 1820s and up to 1832; one of these house was occupied by Ann Cossham for a time the other was let out to tenants. 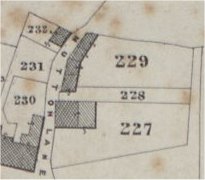 We don’t know any more about Thomas, nor how or when he disposed of the property.  Our next source is the 1840 Tithe Survey.  The Tithe Map on the right shows shows four cottages all fronting Mutton Lane, now Crispin Lane.  Although they are on the plots where numbers 4 & 6 Crispin Lane, Crispin Lodge and Crispin Cottage now stand. The house now known as 4 Crispin Lane stands on Plot 228 which was a cottage and garden owned and occupied by Benjamin English.

Benjamin English – the 1840 Tithe Survey shows Benjamin owned and occupied the property.  Benjamin English was an agricultural labourer – in the 1841 census he was aged 45 living in Back Street (St Mary Street) with his wife, Elizabeth aged 45 and their six children including James aged 15 who had started work as a blacksmith.  Click here to read more

We don’t know when, but presumably it was following Benjamin’s death in 1868, that the property was sold to William Cullimore.

William Cullimore – William acquired this property at some time between 1867 and 1876.  He never lived there, but let it out to tenants. We have a copy of a deed dated 1909 which showed that William sold this property to his wife, Frances for the sum of £150.  Click here to read more

Ronald Tucker – the 1925 valuation list and 1926 rate book show that the owner of the property was Ronald Tucker.  We had been told that the house at 4 Crispin Lane had been built by the Tucker Brothers in the 1890s.  The rate book confirm that Tucker Brothers acquired the three properties adjoining number 4 Crispin Lane around 1900.  They re-developed those buildings leaving them with one house (6 Crispin Lane) which they let out to tenants, and a stable, coach-house and yard which they used in connection with their building business.

Ronald was one of the two sons of Frank Tucker.  He and his brother Norman took over the running of the Tucker Brothers firm from their father and uncle, George