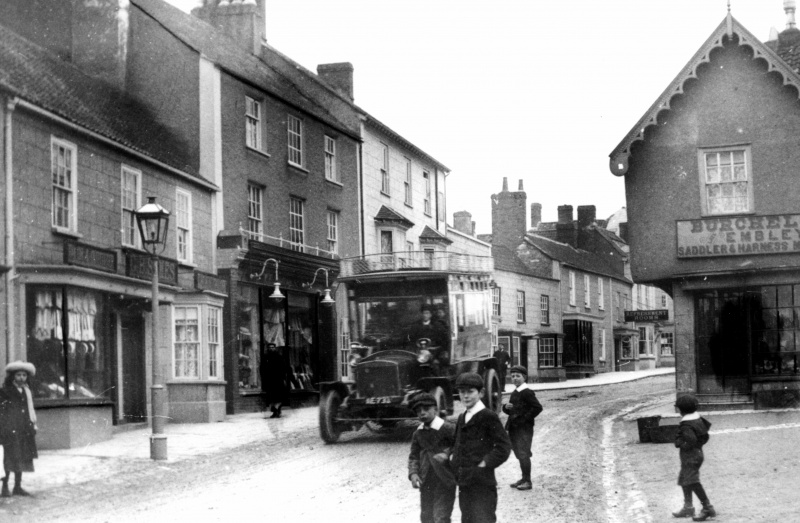 The Anstey family traded in Thornbury High Street for over seventy years.

He married Ann Burchell in St Marys Church, Thornbury on 5th June 1845.  Ann was baptised on 9th June 1822, the daughter of Daniel Burchell and his wife, Hester.  Thomas and Ann ran a tailor’s and draper’s business at what later became 41 High Street in Thornbury.  The above photograph shows the business (on the extreme left of the photo) after it had been taken taken over by another tailor G B Symes.   Thomas and Ann had two children: Henry baptised on 23rd August 1847 and Thomas baptised on 20th October 1850.

Tragically Thomas Anstey died before his second son Thomas was born.  He was buried on 29th April 1850 aged 28.  We do not know the reason for his death but because of its suddenness no provision had been made for his wife and children as Thomas had made no will.  On the 13th January 1851 the widowed Ann Anstey and her two brothers Bryant Jenkins Burchell and John Burchell appeared before the Consistory Court  of Gloucester.  They had to give a complete inventory of the late Thomas Anstey’s credits and possessions and undertook liability to pay £600 as a kind of bond for any claims that might later arise against the estate.  After this they were formally allowed to administer the estate of Thomas Anstey.  The trade directories up to the time of the death of Thomas Anstey show that he was a tailor and draper and no mention appears of any other Anstey business on the High Street.  The Census of 1851 taken a few month’s after Ann’s court appearance, show that she had now another occupation in the same shop.  She was trading as a grocer.  She was a widow aged only 28 with two little boys, Henry aged three and Thomas aged six months.  She was not destitute as she had a servant to help her with her child and housework (Jane Harris aged 26 years) and her unmarried brother, John Burchell, a carpenter aged 22, had come to live with her.

Ann carried on living in the High Street and presumably continued to rent the premises.  The 1861 Census shows Ann was a widowed grocer aged 39 with two sons, Henry now aged 13 and Thomas now aged 10.  On 31st August 1870 the shop was put up for sale at auction.  It was described as being ‘a freehold dwelling house and premises with a small garden behind in the occupation of Mrs Ann Anstey, grocer and general shopkeeper.  The premises have a good shop front, two entrances to the High Street and a right of way from the garden at the back into Soapers Lane’.  We understand from the rate books that Ann bought the property.

The 1871 Census shows Ann was a shopkeeper aged 48.  Thomas was still living with her, now employed as a carpenter.  Ann’s other son, Henry had moved away from home in 1868 and was now working as a hosiery salesman in one of the big shops in Wine Street, Bristol.

Of their two sons:

Henry Anstey.  Henry was baptised on 23rd August 1847.   We know from the Gazette of 21st May 1921 that Henry Anstey was a pupil of Thornbury Grammar School.  He left Thornbury in 1868 and became a chartered accountant.  He was a magistrate, an alderman, a Churchman and a leading member of the Coalition Unionist Party.  He was a vegetarian and wrote pamphlets for the cause and was said to be the only vegetarian on Bristol Council in his time!

The 1871 Census shows that he became a hosiery assistant in a large department store in Wine Street in Bristol.   However he was soon very successful and by 1881 the census shows that he was an accountant living with his young family at Chandos Road in Bristol.  He married Louisa Agate in Portsea in 1873 and they had two children Ellen in 1874 and Henry in 1876.

On the death of his mother Henry became the owner of the premises in the High Street and he let the shop out to various traders, including George Bernard Symes the tailor, whose shop is in the photograph above.

He died on April 11th 1924 at his home at Fernbank Road in Redland.  Perhaps in view of his first hand experiences of life in shops and small businesses it is not surprising that his obituary mentioned that the cause of the rights of shop assistants was very important to him.  It was not a popular cause but eventually he lived to see early closing days and a weekly half holiday introduced.  He was also a fundraiser for Winsley Sanatorium and did much to support those suffering from tuberculosis. 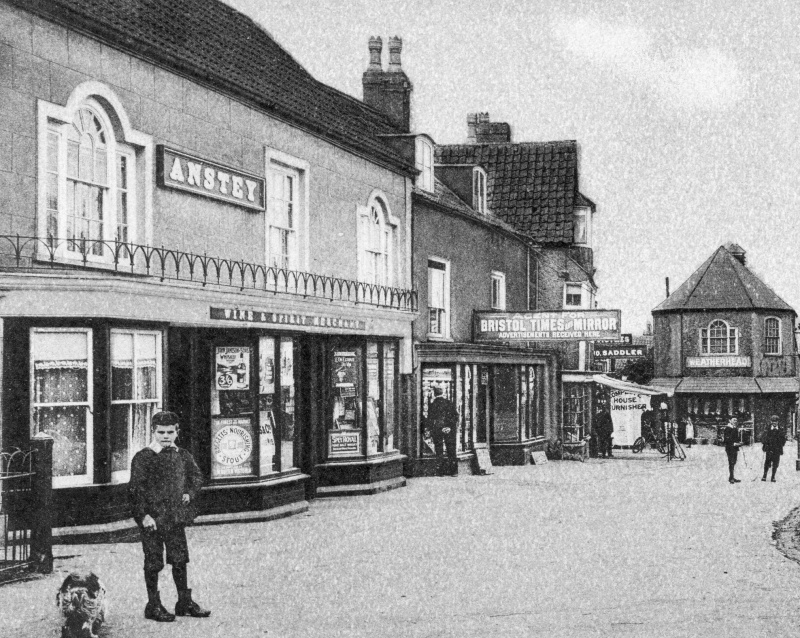 Thomas Anstey.  Thomas was baptised on 20th October 1850.  In the 1851 census Thomas Anstey was only six months old and living with his widowed mother Ann who was a grocer and general shopkeeper aged 28 living at 41 High Street.  Thomas had a brother Henry aged three years.  Thomas’s uncle, John Burchell was also living in the house.  In the census of 1861 Thomas was still living with his widowed mother and brother in the High Street.  As described above Thomas’s brother, Henry did well for himself and it seems likely that young Thomas was also encouraged to study and improve himself.

By 1871 Thomas had become a carpenter and he was living with his mother who was still a shopkeeper in the High Street.

On 27th December 1879 Thomas Anstey married Emily Eddington in St Mary’s Church in Bristol.  Emily was born about 1851 and baptised on 17th January 1860 when she was 9.   Her parents were William Eddington, a plasterer and his wife, Jane (nee Tanner) who lived at The Plain in Thornbury.

In the 1881 census Thomas Anstey was a carpenter aged 30 living with his wife Emily, a fancy shopkeeper aged 29.   The head of this household was Emily’s aunt, Elizabeth Ford and they lived at at her premises, now 24 High Street.  Thomas and Emily had a son, Thomas Ford Anstey, baptised on 2nd October 1881.  A daughter, Emma Jane Anstey was baptised on 7th October 1883.

In August 1884 Thomas obtained a beer wine and spirit shop licence which was transferred to him from Jane Ellis who had made use of the licence at her premises at 43 High Street.  Thomas and his wife Emily continued to live at the home of Emily’s aunt and the shop still sold fancy goods and china but it now had a separate section selling wines and spirits.  Elizabeth Ford (Emily’s aunt) died on 15th June 1887 aged 78 years.  In her will written on 5th January 1887 she had left the property to her niece, Emily Anstey.  The Rate Books show that Emily was actually the owner and not her husband Thomas.

The 1891 census shows Thomas traded as a wine and spirit merchant.  However trade directories show that he was also still a china dealer (presumably that was Emily’s responsibility) and that he was an agent for Northern Assurance.

The family appear to have prospered and in 1908 Thomas Anstey bought two  properties that were combined at a later date to become 8 Horseshoe Lane.  The 1910 Rate Book also shows that Thomas owned and used two properties that sadly we know nothing about nor even how he used them.  One of these properties was in Soaper’s Lane, off the High Street and the other was a house that stood between what later became 8 and 10 Bath Road.   We do know that he rented a coach house in St Mary Street and owned a second coach house in Horseshoe Lane which would indicate that he had a delivery service for his business.

He carried on this wines and spirits business until at least 1914 and he is listed as living at 24 High Street in the 1918 electoral register.  The property at 8 Horseshoe Lane was sold in 1918.

Emily died on 18th April 1921 aged 70.  Under the terms of her will (dated 1st August 1919 before her husband’s death) Emily arranged that the income from 50 High Street (then occupied by Sidney Gayner) should be given to her husband, Thomas Anstey, during his lifetime and then the property would be given to her daughter, Emma Jane who had married John Godfrey Taylor in Thornbury in 1908.  We are not sure what was specified in the will about 24 High Street but we know that it was put up for sale by auction in May 1921.  It was described as a “valuable freehold full licensed shop, dwelling house, garden etc and business and goodwill of a wine and spirit merchant in the High Street belonging to the estate of late Mr Thomas Anstey of Thornbury.”  It was bought for £1750.

Thomas Ford Anstey was baptised on 2nd October 1881.  He became a bank cashier.  He was still living with his family at the age of 29 in the 1911 Census but in 1913 he married Doris Lucy Gayner, the daughter of Francis Gayner.  Their daughter Barbara was born in Thornbury in 1917.  By 1921 they had moved to Falmouth in Cornwall where their son Michael was born.  Although they appear to have remained in Falmouth, the family continued their connection to Thornbury and Doris Anstey bought 24 Castle Street and 15 The Plain in 1956.

Emma Jane Anstey baptised on 7th October 1883.  She did not appear to have an occupation in the 1901 Census but was living at home with her family.  She married John Godfrey Taylor a chartered accountant in 1908.  Their wedding was reported in the Gazette of December 5th 1908 in which it was said that John Godfrey Taylor lived in Baldwin Street Bristol and that he was the eldest son of John Taylor of Thornbury.  It said the couple would be taking up residence in Bristol.

John and Emma had at least two children: Emily Ethel Godfrey Taylor born in 1909 and Annie Margaret Taylor born in 1910.  Emma died aged 43 on 10th January 1927 when she was living at 621 Gloucester Road, Horfield, Bristol.  Letters of administration were granted on 3rd February 1928 to convey 50 High Street to her husband.