Henry Baylis and his family Baylis family at the back of their house by the stables

Henry Baylis was born on 30th October 1834, the son of Walwin and Hannah Baylis.  The Baylis family of Thornbury is best known for providing Thornbury with a carrier service for more than 100 years.  We are not sure how far back in time they started this service.  The earliest record we have seen so far mentions Walwin Baylis as a carrier when his daughter Emma was baptised in 1831.

Henry was brought up in the family home at 4 Chapel Street.  On 19th December 1858 Henry married Amelia Walker, the daughter of Daniel Walker, a labourer from Thornbury.  Amelia’s family lived in Duckhole in Lower Morton in the 1841 census.  By 1851 aged only 12 she had already become employed as a servant in household of a farm in nearby Newton.

It is interesting to note that Ann Fynn, a descendent of the Baylis family, told us that Amelia was known as ‘Jane’ within the family.  We can’t explain this as she was referred to as being ‘Amelia’ in census, baptism and burial records.

The 1861 census shows that Henry and Amelia (although her name was shown in the census as ‘Ann’) were living in the house on the corner of St Mary Street and Chapel Street (which later became known as 61 St Mary Street).  They had two children: George aged two and Albert aged one.  Henry was working as a carrier, presumably with his father.  They were still in St Mary Street in the 1871 census but now Amelia had had lots more children: George aged twelve, Albert aged eleven, Florence aged eight, Jane aged six, Emily four, Mary Ann two and Amelia Anne aged seven months. Henry bought the property that became 1 Bath Road on 19th November 1873 for £190.  The 1876 rate book confirms that Henry now owned property in Bath Road (then called Bullseys Lane).  At that time he was occupying only the stables and coach-house he owned, presumably for the use of his carrier business.  The adjoining house and garden which he owned was initially occupied by George Parnell, but by 1880 Henry had moved into the house itself.  Here on the right we have a photograph of the house and business premises.

We were told by Ann Flynn, that the family always called the house ‘Rock House’.  This house was later known as 1 Bath Road.  Henry was being listed in the trade directories from 1877 onwards as being a carrier and haulier and from 1889 he was offering a daily service to Bristol.  The 1895 directory specified that the daily service ran to the White Horse, Barr Street in Bristol.

The 1881 census showed Henry as a ‘carrier haulier etc’ living with Amelia and the children: George a carrier aged 22, Florence aged 18, Emily aged 14, Mary Ann aged 12, Annie aged 10, Walwin aged 8, Ada aged 6, Austin Edward aged 4, Kate aged 2 and Elsie aged 3 months.  By 1891 he had added one more child: Ralph who was then aged 7.  In 1901 Henry and Amelia were still living at 1 Bath Road but all the children had moved away except for Jane who was a dressmaker aged 36 and Ralph who had become an ironmonger’s apprentice aged 17.  The 1911 census shows Henry and Amelia still living at the house in Bath Road.  Henry was still described as a carrier and farmer aged 75.  They were now living with Kate aged 31, Elsie aged 29 and Ralph a carrier’s assistant aged 26.

Amelia died on 29th January 1914 aged 75.  Henry made a will dated 1st December 1915 appointing as his trustees Walwin Baylis of Clipstone Road, Forest Town, Mansfield a contractor and George Tucker a builder of Thornbury.  Henry died on 19th May 1918 aged 83.  The carrier business was taken over by Ralph, Henry’s youngest son.

When a Thornbury man, George Williams, applied for an exemption from military service in the Great War he said that his employer was Henry Baylis of Thornbury Coal Company of the High Street.  This company advertised in trade directories from as early as 1897 to 1936 and we are still investigating who actually owned that company during that period.

When another man, Francis Gough applied for exemption, the Baylises stated that they held 80 acres of land, of which 7 acres were arable, they kept 6 dairy cows and 26 other beasts, 28 pigs, 12 sheep and 7 working horses.  They also had a coal business and a daily carrying business running daily between Thornbury and Bristol.

On 24th June 1919 the trustees of Henry Baylis, Walwin Baylis and George Tucker having had the property valued in accordance with Henry’s wishes sold the property at 1 Bath Road for £625 to Kate Baylis a spinster, Elsie Baylis a spinster and Ralph Baylis a carrier.  (See the bottom of this page for details of what happened to Henry’s children).

Of Henry Baylis’s children, we know that:

George Henry was baptised in Thornbury on 6th February 1859.  George worked initially as a grocer and then became a carrier living in 1 Rock Street, very close to his parents.  Click here to read more

Florence was born in Thornbury in 1862.  Florence married Thomas Shaw in Warrington in 1899.  They had eight children, one of whom died in infancy.  In 1911 they were living in Grappenhall in Cheshire where Thomas was employed as a manager of a hatter and outfitter’s.

Jane was born in Thornbury in 1865.  Jane married a widowed carpenter, Henry Sherborne in 1907 who lived at 4 Bath Road.  Click here to read more

Emily married William Stiff in Bristol on 1st August 1894.  They had three children, one of whom died in infancy.  In the 1911 census they were living in Bristol where William was employed as a railway clerk.  Emily died in 1933.

Mary Ann Elizabeth was born in 1868.  The 1901 census shows Mary as the wife of William James Stearman, a coffee house keeper living at 138 Lower Ashley Road, Bristol.  Her brother, Austin Edward Baylis was boarding with them.  He was a van driver aged 24.  In the 1911 census they were living at Glebe Road, St George, Bristol. William was a coal wharfe manager.  They had one son, Walwyn, aged 3.  The census shows that William was born in Battersea in London and that they had been ‘married’ for 15 years.  We can find no trace of the marriage.

William died in December 1946 aged 80.  An article in the Western Daily Press dated 15th January 1949 refers to Mary Ann Elizabeth Stearman.  She was living at Lower Bath Road at that time with her brother and sister.  She applied to the Court for reasonable maintenance out of William’s estate.  It says that the parties had been married in 1895.  They had no children but had lived together until 1944.  When William died he left a net estate of £1686 but made no provision for Mary and gave the residue to their adopted son.  The judge referred to the fact that Mary had acted as William’s wife for 52 years and had only deserted him in his old age. He ordered that Mary be paid £100 out of the estate. 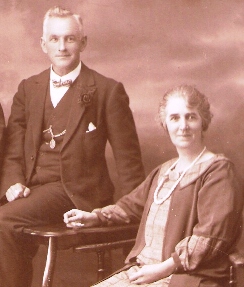 Amelia Annie was born in Thornbury in 1870.  Amelia married John William Richardson on 16 Jan 1897 in Cheshire.  In the 1911 census they were living in Moorfield, Glossop, Derbyshire.  John was a chauffeur (domestic).  They had 2 daughters, Doris and Nora, who never married and finished up living in Cardiff, and a son, Edgar Walker.

Walwin Robert was born in Thornbury in 1872.  Walwin married Sarah Elizabeth Palmer in Worksop in 1897.  The 1911 census shows them living in Mansfield.  Walwin was a carting contractor.  They had seven children, four of whom died in infancy.  Walwin died in 1933 in Mansfield. Ada was born in Thornbury on 14 July 1874.  Ada married Walter Barnes in Bolton on 9 June 1897.  In the 1901 census they were living in Westminster Road, Bolton where Walter was a clerk in a thread works.  They had one son, Austin aged one.  By the 1911 census Walter had become a collector of gas and electric accounts and they had moved to Park View, Eagley Bank, Bolton.  Ada died in Blackpool on 18 May 1946.  We have a photograph of Walter and Ada on the right.  Please click on it for a larger image.

Austin Edward was born in Thornbury in 1877.  Austin was boarding with his married sister, Mary Ann Stearman in Lower Ashley Road, Bristol in the 1901 census.  Austin was a van driver for a drapery at that time aged 23.  In 1903 Austin married Ellen Jane Cooksley in Bristol.  The 1911 census shows that Austin was a licensed victualler living at 18 St James Churchyard, Bristol.  Ellen was helping in the bar.  They had one daughter, Gladys Ellen aged 7.  We believe that the photo above shows Austin driving the Bristol to Gloucester carriage ad we would like to hear from anyone who knows more.  Austin died in Bristol in 1948.

Kate, Elsie and Ralph Baylis – the three youngest children never married.  Kate was born in Thornbury on 16th April 1879, Elsie on 25th December 1880 and Ralph on 10th July 1883.  All three of them carried on living at 1 Bath Road until their deaths, although the 1901 census does show Elsie was a court dressmaker living at 38 Garden Place in Kensington at that time.  Ralph began by helping his father in the carrier business but eventually he took over the business.

It appears that Ralph continued his father’s interest in farming.  In 1928 he got into trouble charged with causing unnecessary suffering to certain two young cows by unreasonably omitting to provide them with sufficient nourishing food and proper care and attention.  He got into further trouble in 1936 when he was charged with causing unnecessary suffering to a horse by working him in an unfit state.  On this occasion he was fined £5 and £3 3s expenses, but the judge said he had seriously considered sending Ralph to jail.

The register compiled in 1939 in preparation for the war shows Kate, Elsie and Ralph in the house. Elsie was still being described as a dressmaker.  Ralph was a carter and Kate was the housekeeper.

We have been told that Ralph had an accident which involved him falling off a ladder whilst it was leaning against a tree.  The injury restricted him from too much physical activity, although it was felt within the family that he used this as an excise.

Albert was involved in a Court Case in 1878.  Albert and George Baylis were driving their horse drawn van along what is now the A38 from Patchway with a Mr Vowles.  When they reached Almondsbury, James Crossman tried to jump on the tailboard of the van.  George Baylis “curled the whip around his legs to make him desist”.  James Crossman called for help and two other men began to throw stones.  Albert was hit in the eye, and suffered “a severe wound”.  His attackers were sent to prison for one month.

Albert married Sarah Ann Ashley in 1887 and they settled in Sibland/Crossways area of Thornbury.  Albert became a haulier and carrier, although at the time of his death in 1906 he was described as a general labourer.  Albert and Sarah Ann had five children: Beatrice Annie baptised on 4th December 1887, Hubert Lloyd baptised on 2nd November 1890, twins, Albert Howard and Percy Ashley baptised on 11th September 1892 and Adelaide Amelia baptised on 1st July 1896.  Their last child Christian Baylis lived only six weeks and was buried in Thornbury on 7th February 1897.  Sarah Anne died soon afterwards on 31st March 1897, aged only 36.

The newspaper article above on the left dated 7th May 1896 shows Albert was trouble with the police but got away with it.

Albert died of acute pneumonia and heart failure on 25th February 1906 aged 45.  We understand that following the death of their parents, the children were brought up by Mrs E Skidmore.  We don’t know what connection Mrs Skidmore was the family. 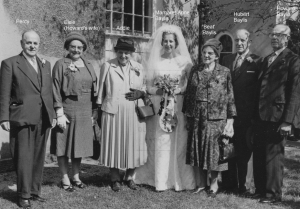 Above we show a photo of Albert’s children taken at the wedding of Hubert’s daughter, Margaret Anne.

We have been lucky enough to acquire photographs of the Baylis family.  Click here to see these photos.