and their son Henry 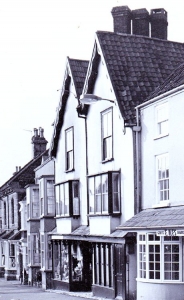 Of the people who were associated with the double-gabled property that became 2 Castle Street in Thornbury the earliest we have so far traced was a butcher, Thomas Bingham.  Thomas was the son of Henry Bingham junior and his wife Brigit (or Bridget) nee Harris.  Thomas was baptised on 13th November 1706.  He was the eldest of a family of at least three children.  He had two sisters; Sarah who was baptised on 1st June 1708 and Betty who was baptised on 5th November 1712.  Sarah Bingham married Richard Quarman on 7th August 1732.

Thomas Bingham married Mary Wilkins on 30th November 1731 and their marriage was registered in the Yate area.  Mary was the daughter of a Quaker couple, Richard and Sarah Wilkins.   Her birth was recorded in Frenchay Meeting house on 17th June 1709.

Mary’s father, Richard Wilkins died in 1753 and in his will of that year he divided his property amongst his children and specifically said;

At this stage we do not know when Thomas Bingham died but it is likely to have been before 1770 as only his wife Mary’s name appears in the tax records of 1770.  It is possible that Thomas Bingham’s burial was on 15th February 1762, according to the website Scribes Alcove.

At the moment we are unable to say more precisely what properties Mary Bingham owned and whether these included just the land or the actual properties which became 2 and 4 Castle Street.  However we do know that from the order of the land tax properties in the lists of 1780 to 1784 Mary Bingham owned and occupied property in what is now the area of the top part of Castle Street or The Plain.  From the apparent age of the existing house it would seem likely that this was actually what is now number 2 Castle Street.

Thomas Bingham Junior; When his mother died her property was passed to her son, Thomas, in accordance with the will of her father, Richard Wilkins.

We also know that there was another indenture dated “31st Day of August 1798 and made between Thomas Bingham of the parish of St Michael in the City of Bristol shop keeper and Eleanor his wife of the one part and the said Henry Bingham conveyed… (the property in Castle Street)… to the use of the said Henry Bingham his heirs and assigns for ever”.

This appears to indicate that Thomas Bingham did indeed inherit property which included that in Castle Street from his grandfather, Richard Wilkins after the death of Mary Bingham, his mother but for reasons we do not know at this time he agreed to let his brother Henry have at least some of the inheritance.

These last three children were great nieces and nephew of Henry Bingham and became his heirs.

Henry Bingham.  The land tax records for 1800 show that Henry Bingham was paying £0 3s 0d for property that he owned but which appeared to be untenanted at that time as the space for occupier was left blank.  He was also paying £0 3s 0d for a property which he inhabited himself and £0 2s 6d for the Spur, an orchard, which he used himself.  By 1809 the first property was still £0 3s 0d and owned by Henry Bingham but was occupied by “Clark”.  The second property and the Spur were still owned and used by Henry Bingham himself.  We know the two properties in question later came to be known as 2 and 4 Castle Street. The Spur was also known as Spur Orchard and we know from the sale of property advertised on 13th March 1869 that it ran alongside what is now Gloucester Road and was 308 on the Tithe Map.  It was described as freehold land containing three roods and two perches with stables and other buildings and was rented by John Williams.

Henry’s will was registered at Gloucester and can be found at Gloucestershire Record Office reference 1831/238.  Under the terms of his will he left

“unto my great nephew William Llewellin of the City of Bristol, upholsterer and cabinet maker all those my freehold messuages tenements or dwelling houses situate in the borough of Thornbury aforesaid and in the respective occupations of myself and of Mrs Elizabeth and Mrs Ann Hodges and also that my small orchard situate in the parish of Thornbury aforesaid and called or known by the name of Spur” also “copyhold lands situate and being at Crossways called the Long Leaze and the Broad Leaze and the orchard now in the respective occupations of Stephen Hignell, John Iles and James Sayse as tenants,”……”upon trust to pay to or permit and suffer my niece Sarah Carter spinster now residing with me and her assigns to receive and take the rents issues and profits”.

Henry Bingham died 29th November 1831 aged 81.  His tombstone described him as an alderman at the time of his death.  Henry Bingham had been a mayor of Thornbury from 1809 to 1811.