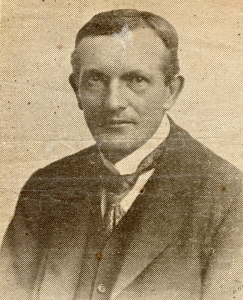 The photograph below shows the shop in the High Street with a gentleman in the doorway watching a passing parade.  The sign above his head reads “E. Brown printer and Office of the South Gloucestershire Chronicle”.  Click on the photo to see a larger image. Edward Henry Mahony Brown was born on 24th January and baptised on 12 March 1874, the illegitimate son of Jane Frances Brown and the grandson of John and Jane Brown.  All three generations of this family became well known in Thornbury as printers and stationers and in the case of Edward for founding and editing the South Gloucestershire Chronicle, the local newspaper which was published from 1899 until his death in 1921.

John Brown was probably the son of Thomas Brown and his wife, Millicent.  Thomas was a baker in Long Street, Wotton Under Edge in the 1841 census which shows John as a printer’s apprentice aged 19.  We can’t be sure about John’s marriage as there are several possible marriages.  We suspect that it is the one which was registered in Dursley in 1846 in which John Brown married Jane Hall.  Their daughter Jane Frances was born in Wotton Under Edge in 1847.  By 1849 the family had moved to Thornbury where he was advertising his business as bookseller, stationer, printer and bookbinder.

They went on to have more children in Thornbury: Frederic born in 1850 and Edward born in 1852 both baptised on 18th April 1852 and Mary and John both baptised on 13th April 1856.  The 1851 census shows John Brown Snr operated his business from one of the properties which later became 14 High Street which he was renting from Thomas Osborne Wetmore.  According to the deeds John was using the left-hand property of the two.  The 1861 Census shows John still at the same place.  He was now described as a printer and bookseller.  It would seem that his wife must have been involved for when John died at the early age of 42 in November 1862, Jane carried on the trade of printer and stationer.  When the High Street property was put up for sale in 1865 it was described as being occupied by Mrs Brown, stationer.  We have a bill head from this period above.

On 25th March 1870 Jane Brown senior moved into the property now known as 34 High Street which then owned by the Mayor and Corporation.  The 1871 census shows Jane senior as a printer and stationer and Frederick as a printer.  Both daughters (Jane junior and Mary) were at home but there was no occupation listed on the census.  Jane’s other son, Edward, was ling with his paternal grandmother, Millicent Brown, in Rosemary Lane, Wotton Under Edge and he had started working as a draper’s assistant.

By the mid 1870s Frederic Brown had moved to Lichfield where, having been one of the proprietors of the Lichfield Chronicle, he established a rival Friday paper, the Lichfield Mercury, in September 1877.  He was also a bookseller.  The 1881 census describes him as a newspaper publisher employing 5 compositors, 1 editor, 1 reporter, 7 apprentices and 2 assistants.  Frederic Brown continued to publish his paper until his death in 1901 when its ownership passed to his brother Edward who sold the business in 1905 to W H Smith & Son.  The Lichfield Mercury continues to be published today.

Jane Frances Brown had a son, Edward Henry Mahony Brown baptised on 12th March 1874.  In the 1881 census Jane Brown senior appears to be away from home and we can’t trace her anywhere.  Her son, John, is running the business as printer and bookseller.  He is living at their property with his sisters, Jane and Mary and Jane’s son, Edward.  John’s brother, Edward, has become a warehouseman boarding in Bristol.

In 1885 young Edward applied to enter Thornbury Grammar School and failed the scholarship examination so was unable to attend.  He retook the examination and was admitted on 17th January 1887.  It would seem that Uncle Frederic may have been a source of inspiration to young Edward Brown; in 1891 he was working as a solicitor’s clerk but at some point he decided to start his own newspaper.  On 15th April 1899 he founded The South Gloucestershire Chronicle based in the High Street.

In June 1897 Jane produced a booklet to commemorate the Diamond Jubilee of H.M. Queen Victoria.  By the 1901 Census, Jane was still trading as a printer and stationer aged 79, her daughters, Jane Frances and Mary were stationer’s assistants, now aged 49 and 42 and Edward had become a stationer’s assistant and editor of the South Gloucestershire Chronicle.

The photograph on the right is of Edward Brown and was taken, suitably, from a newspaper about this time. The image seems to be similar to the image of the man standing outside the Edward Brown’s office in the photograph above.

Click here to read an article written about the South Gloucestershire Chronicle by H. W. Phillips The thumbnail photograph on the left is an advertisement from the South Gloucestershire Chronicle of September 16th 1899 outlining the kind of printing and bookbinding work that J. Brown was now able to take on.  Click on the photograph for a larger image.  Although we believe that Edward Brown founded the Chronicle newspaper, the advertisement says “J Brown” at the Chronicle Offices.  The “J” is in this instance could be Jane Brown, Edward’s grandmother, who continued to play a role in the printing business.

The rate books of 1899, 1905 and 1910 show the building in St Mary Street known as the Malt House was being used as a Printing Office by Edward Brown.  The 1910 and 1913 Voter’s List show that Edward Brown had the two addresses.  It is therefore a strong possibility that the South Gloucestershire Chronicle was actually printed in the Malt House and his office, shop and home were at 34 High Street.  We are grateful to Meg Wise of Thornbury Museum who printed the following appraisal of Edward’s work in her Research News March 2010:

“Brown was a member of the Institute of Journalists and acted as editor, publisher, proprietor and also reporter, sometimes signing articles with ‘E B’ but he was probably “The Chronicler” as well.  He seemed to be quite fond of filling spaces with quirky and literary quotations!  It is not known if there were any other reporters; no mention is made on the census returns of employing other workers.  London and international news was covered.  Local news included reports of Rural District Council meetings, politics, auctions, crime, sport, births, marriages and deaths as well as longer accounts of weddings and funerals, gardening and agricultural notes.  The paper also carried advertisements like For Sale and Wanted, To Let, Public Announcements and sometimes items like train or bus timetables.  The Chronicle Printing Office continued to be general printers as well as a stationery and book shop and Fancy Goods Repository.  It also advertised Brown’s General Library, lending books out at a penny per volume.  In the 1904 Browns Almanack (the 44th edition) it says “In our Printing Department everything is ‘up-to-date’, and having a lifelong experience of Printing we can assure customers that we produce ‘Progressive Printing’ at reasonable charges.  Our Stationery, Bookselling and Fancy Goods Department is also well stocked.”

The 1905 “Brown’s Thornbury Almanac” printed and published by J Brown at the Chronicle Office featured an advert for “The old Established Fancy Bazaar.”  This sold novelties suitable for presents.  The advert promotes Japanese items which were the fashion of the day, including china, tea sets, ornaments, Japanese boxes and oriental embroidery.  It also boasts the largest collection of Christmas cards in the town and a variety of toys, games, dolls and books.

We have another photograph of the Chronicle offices which appears to be part of a postcard produced by Brown’s.  Click on the small thumbnail picture for a clearer view.

When Jane Brown and the family moved into 34 High Street it was used as two separate units.  Initially the Brown only occupied the larger, right hand unit, but from about 1906 Edward Brown took over the occupancy of both parts.

Jane Brown (Snr), Edward’s grandmother, died in 1912 aged 92.  The Town Trust records have no entries for the Browns after 1916 which may suggest that they then moved and the Food Control committee were known to have taken over at 34 High Street.  The 1925 valuation list and 1926 rate book show Edward’s mother, Jane Frances and his sister, Mary moved next door to 32 High Street so they may have moved there as early as 1916.

Edward continued producing the Chronicle until his death on 3rd July 1921 aged 45.  He was buried in Thornbury Cemetery.  His death was reported in the Gazette newspaper on 9th July 1921;

“It was with very deep regret that the inhabitants of Thornbury heard of the death of Mr Edward Brown, editor of the South Gloucestershire Chronicle which took place on Sunday at the Bristol Royal Infirmary.  Mr Brown recently underwent an operation and it was thought he was progressing most satisfactorily until shortly before he passed away.  He was an able journalist and was well known throughout a wide area.  He was an ardent supporter of the Conservative party a member of the parish church choir and hon. sec. of the Thornbury Branch of the Printers’ Union and in many ways came prominently before the public.”

Edward Brown was very well known and respected in the district.  He was Secretary to both the Thornbury Branch Church of England Temperance Society and the CETS Band of Hope (juvenile branch).  He did not get married.
After Edward’s death the South Gloucestershire Chronicle was taken over and incorporated into the Gazette in January 1922 becoming known as the Thornbury Gazette with the subtitle ‘and South Gloucestershire Chronicle’.  It is not known when the subtitle was dropped.

It would appear that the Browns continued in business.  The 1923 and 1931 Kelly’s directories show ‘J. Brown as a printer and stationer’ in the High Street.  In 1926 the Misses Brown were advertising as Stationers and Newsagents in the High Street.  Jane Frances Brown died on 21st March 1929 aged 81.  Her sister, Mary, carried on trading as a stationer at 32 High Street until she died on 8th December 1942 aged 89.  The special register compiled in 1939 in preparation for the war shows Mary Brown living alone in 32 High Street.  The register shows her birth date as 2nd November 1853.