Alfred was the son of Hester (born Hester Jenkins) and her husband Daniel Burchell a carpenter.  He was baptised at St Mary’s Church in Thornbury on the 17th March 1820.  In the Census of 1841 the Burchell family all lived in St Mary Street.  Alfred’s father, Daniel was a carpenter from Lineham in Wiltshire.

Alfred and Ann had a daughter Sarah who was baptised 19th March 1848, at which time their address was “Sibland”.  In the baptism record Alfred’s occupation was given as carpenter.  An advertisement in the Bristol Mercury of May 25th 1850 shows the sale notice for Hacket Farm which was then in the occupation of Alfred Burchell.  It had a barn stable and farm house and over 52 acres of land.  This is presumably why Alfred and Ann had moved by the baptism of their son, William Daniel, on 8th December 1850.  Their address was then given as Thornbury and we believe that the family lived at 2 Pullins Green by that time.  In the 1851 Census, they were shown as living at 2 Pullins Green, one of the six small cottages on the side of the Green owned by his father Daniel Burchell.  The 1851 Census describes Alfred as a ‘Farmer (out of a farm)’.  This is presumably because the farm had been sold.  Alfred and Ann’s daughter, Sarah was then aged aged three and their baby son, William Daniel was five months.  Another son John was baptised on 2nd September 1855.

The family are also shown as living at 2 Pullins Green in the 1861 and 1871 censuses and the 1876 rate book.  By 1861 the census described Alfred as a carpenter.  In the census of 1871 both Alfred and his son, William, were carpenters, and the younger son, John, had become an apprentice carpenter.

Alfred’s father Daniel died in 1866.  Daniel had left his property in trust to his wife Hester for her lifetime.  Hester died in August 1875.  The 1876 rate book shows that Alfred Burchell’s home at 2 Pullins Green was owned by the “representatives of the late Daniel Burchell”.

We believe that by 1881 Alfred and his family had moved across the Green to what is now number 5 Pullins Green. In the 1881 census Alfred is shown as a carpenter aged 60, his wife, Ann aged 55 and their unmarried son, William who was a carpenter aged 29.  Ann died in 1887 aged 58 and is buried in Thornbury St Mary’s Churchyard.

In 1890 the Bristol Mercury reported that Alfred Burchell bought a property in Thornbury worth £232 10s at an auction in the Swan in May of that year.  The 1890 rate book shows that this property was the house now known as 60 High Street which Alfred let out to tenants.

In 1891 the house at 5 Pullins Green was occupied by Alfred, his son (now described as William Daniel, a carpenter aged 40 and still unmarried) and his grandson, Alfred Edwin John aged 12, the son of John Burchell, yet another carpenter.  When the house was put up for sale at auction in 1894 it shows that Alfred was the tenant at the rent of £10 per annum. At that time the house was bought by William Wall, but the rate books show that Alfred had acquired it by 1899.

We know from another newspaper article published on 20th September 1894 that Alfred appeared to own three cottages in Chapel Street.  He was summoned by Thornbury Rural Sanitary Authority for keeping a cesspool at the cottages which was causing a recurring nuisance every time it rained.  An order was made prohibiting the houses being used for human habitation and making Alfred sort out the nuisance.  It appears that Alfred sold these houses to R. H. Smith as they were still void in 1894 and 1899 Rate Books when he was the owner. 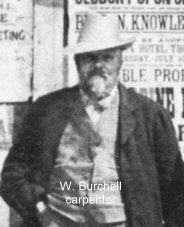 In the 1901 census the house at 5 Pullins Green was occupied by the same three people: Alfred, now 80 his unmarried son, William Daniel, a retired carpenter, and grandson, Alfred, now a teacher aged 22.

The photograph on the right shows William when he was part of Tucker Brothers workforce working on the refurbishment of Coronation House in the High Street in 1902.

Alfred died on 11th November 1905 aged 85 years and was buried in St Mary’s churchyard.  In his will dated 14th March 1895 he left the house at 5 Pullins Green to his daughter, Sarah, who was married to James Kiddle.  He left the house at 60 High Street occupied by F. J. Nalder to his son, William Daniel.  He left to his other son, John, two cottages in Crossways, one of which he was occupying, the other occupied by a person named ‘Summers’.