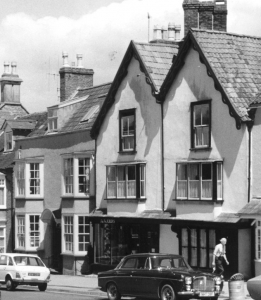 Sarah Carter was the niece of Henry Bingham who owned properties at what later became known as 2 and 4 Castle Street in Thornbury.  She lived at the double-gabled house that became number 2 Castle Street, Thornbury for many years.

Her uncle, Henry Bingham, was the son of Thomas Bingham a butcher and his wife Mary.  Thomas and Mary had at least two other children apart from Henry.  These were Thomas Bingham, born 12 October 1743 and Sarah who was born on September 7th 1733.

Henry Bingham’s sister, Sarah, was the mother of the Sarah Carter who later shared her uncle’s house.  The elder Sarah had married John Carter in Thornbury on 12th April 1763 in Thornbury.  Their first daughter, who was also called Sarah, died on 1st October 1770 before her third birthday.  They had another daughter, Elizabeth who was baptised 21st September 1770 “about two years old.”  Elizabeth died a short while later and was buried on 4th October.  They lost another son, William who also died in his infancy.  Their second daughter was born on 23rd October 1769 and was baptised Sarah Carter on 2nd May 1772.  Her mother was baptised on the same day.  Sadly the older Sarah, Henry’s sister, died on 31st January 1774 aged only 41.  The memorial inscription at St Mary’s Church in Thornbury says

“In memory of SARAH wife of John Carter of this town, Butcher, who died January 31st 1774 aged near 41. Also of SARAH their daughter who died 1 October 1770 aged near 3 years. Also of WILLIAM their son who died in his infancy. In memory of the said JOHN CARTER who died 15 April 1810 aged 72.”

Left alone with Sarah, his baby daughter, John Carter quickly remarried.  He married Mary Shipway on 19th October 1774.  They had more children, including Margaret and Henry Carter, who also lived in Castle Street.  Another child of John and Mary Carter was Ann Carter born on 26th March 1777.   The deeds of The Vine House, 8 High Street, shows John Carter was living there in 1793 and 1808.  John died aged 76 and was buried on 19th April 1810 leaving all his estate to his widow, Mary.

Ann Carter married James Morgan on 13th May 1807.  Annie and James Morgan had had a daughter also called Ann who was baptised in September 1815, at which time her father was an inn keeper in Thornbury.

The 1841 Census shows Sarah Carter of independent means living in 2 Castle Street aged about 65 (ages in this census are rounded down) and living with her half sister the now widowed Annie Morgan aged about 55 and Annie’s daughter, also Annie Morgan, aged 20.

Sarah Carter died 1st October 1846 aged 76 and was buried in Thornbury.  Her stepsister Ann Morgan died in April 1855.  Ann Morgan the younger remained unmarried and in 1881 was living in St Mary Street where she was a seamstress.  She died in 1885.

Henry had left all his ready money, security for money, goods and chattels to his niece Sarah Carter outright.  The houses and properties were left to her for her life time.  After Sarah’s death Henry Bingham’s executor his great nephew, William Llewellin was to sell up the properties and divide the resultant profits into three.  William Llewellin himself was to have one third, and Henry’s great niece Margaret Llewellin a spinster living in or near Bath another third.  The final third was to be invested to provide an income for his great niece Louisa Bingham Drew (nee Llewellin) the wife of Hezekiah Drew.

Arrangements were made to ensure that the money was paid to Louisa personally or her specially appointed representative (presumably to prevent the money from going to her husband).  After her death the money was to be invested and incomes paid to her children born either by her present husband or by her first husband who was called Leach (his first name was omitted).  We have since been told by Josephine Jeremiah that Louisa’s first husband, whom she married on 18th October 1819 in Bristol was George Leach.

William Llewellin died 26th August 1847.  The heirs to Henry’s property were then Margaret Llewellin, William’s sister, and Sarah Leach Morris, the daughter of Louisa and Hezekiah Drew, who had married Henry Pearce Morris on 7th May 1848.

On 6th November 1847 both properties (2 and 4 Castle Street) were advertised for sale.  See the advertisement on the right.

On December 26th 1850 Margaret Llewellin, Sarah Leach Morris and Sarah’s husband Henry Pearce Morris conveyed 4 Castle Street to Edward Gough Councell.  We believe that it is likely that at this time number 2 Castle Street also changed hands and was sold to the Penduck family.