and the private school he ran in Thornbury 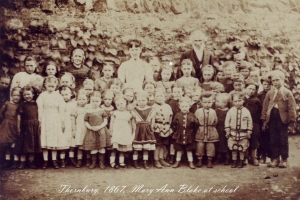 We were told by Miss Higgins that she thought there used to be a school at 5 Pullins Green.  She pointed to the small building in rear garden shown on the map of the area (see below).

We found from the 1841 Census that John Champion, the person occupying the house at the time of the 1840 Tithe Map, was indeed a schoolmaster.  He was aged 40, living there with his wife, Mary Ann, aged 40 and children, Elizabeth aged 5 and William aged 2.  James Powell, tailor aged 20 was also living with them.  The baptism record of their daughter gives her full name as Elizabeth Daniels Champion.

John Champion was born in 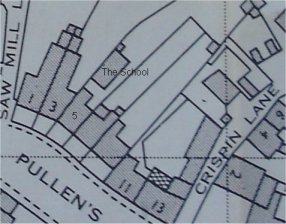 Alveston around 1799.  He married Mary Daniels from Buckerell in Devon in Alveston on 26th June 1834.

The 1851 Census confirms that John was running a Day School.  It is interesting to note that staying with John in the house is Alfred Adams from Iron Acton, said to be a scholar, presumably at John’s school.  Alfred is 21 years old.  This seems rather old to be at school; perhaps he was a student teacher.

In 1861 the family was still living in Pullins Green.  John was 60 but still working as a school master.  His son, William, had became a solicitor’s clerk.  We have been told that he worked for Crossman’s.  William seemed to succeed in this profession, because he moved to Chelsea in London to work in the legal profession (1871 & 1881 Censuses).

An internet contact, Marilyn Brown, kindly sent us a copy of a photograph taken of her ancestor, Mary Ann Blake, whilst she was attending a school in Thornbury.  Click on the image above to see the full photograph.  It is very rare to have such a school photo taken as early as 1866 or 1867 and we have gone to a lot of trouble in trying to identify which of the Thornbury schools is shown in it.  We were particularly worried that the boys clothing looked ‘foreign’ and we contacted the V&A Museum to ask for their opinion about the clothing worn by the children.  The Curator advised us that ‘The clothes are quite reflective of UK children’s fashions of the 1850s and 60s (children’s fashions were often slow to change), including the little boys in tunics at the front – one of the fashions of the times for boys, though not the only one.  There is a slight stylistic debt to an earlier German style of tunics over trousers, but I think that these tunic suits are very British, especially the one with the zig zag trim above the hem.  As they are all worn over trousers, they indicate boys who have been breeched, before which they would have worn dresses’.

Taking into account a lot of factors, like the size of class, age of the headmaster, the standard of dress of the children, height of garden wall etc, we have ruled out the National School and the Council School.  Of the private schools in Thornbury at the time, we think the most likely is the one run by John Champion at his house in Pullins Green.  The wall which would have been at the bottom of their garden still stands (although now outside of the boundary of the garden) and it looks very similar to the one in the photograph.  Mary Ann Blake is the little girl marked with a star above her head!

If we are right about the photograph then the gentleman shown in the rear of the group is likely to be John Champion.  The older lady to the left of the photograph looks about the right age to be his wife.

In the 1871 Census John Champion was still running the school.  He gave his age as only 65, but we know from earlier censuses he would have been 69 or 70.  His wife is shown as 68, although she too would have be over 70.  Perhaps their age was a problem if they wanted to continue working as teachers.  They had one lodger, John Allen, a cordwainer aged 29 from Tortworth.  The records of what is now the United Reformed Church in Thornbury show that John Allen married Elizabeth Liddiatt in April 1873 and they may have moved then to Castle Street, where they were in the 1881 Census.

The 1876 Rate Book shows John had moved from Thornbury so he must have retired.  John’s first wife, Mary Ann, died in 1878 aged 75 years.  John married again, this time at the age of 79 to Clarissa Hickman (nee Stephens), a widow and daughter of the blacksmith of The Street, Alveston.

By the 1881 Census confirms John had retired and moved to Eglantine Cottage in Wotton under Edge.  He died in 1882 aged 82.  Clarissa went over to America to visit several brothers who had emigrated there and she died after only being there for 4 months.

There were several day schools in Thornbury during the nineteenth century, although very little is known about them.  We were delighted to find the following the reference which provided an interesting insight into what it was like in John’s school.  It is taken from an article called ‘Schooldays in the Mid Nineteenth Century’ by Edmund Cullimore which is the booklet ‘Pages from the Past’ by H W Phillips.

Edmund Cullimore recalls that after a period at a school in Oldbury “he was sent at the age of 8 years to a private school at St John Street Thornbury, kept by Mr Champion.  The fee was 10p per week.  The master was noted for driving knowledge into boys by severity: the means used were a cane and his hat (a soft one).  This was used instead of the cane if the offence was not serious.  Home lessons consisted of learning to spell 12 words correctly, a sum and writing.  Woe betide the boy that had not learnt his spelling correctly – he was allowed two or three tries, if he then failed, down came that old hat on the head with the order to stay in during dinner hour and learn it.  I got on very well with Mr Champion and don’t recollect ever being punished.”

You will notice that at this time the name ‘Pullins Green’ was not used and the area was regarded as just part of St John Street.