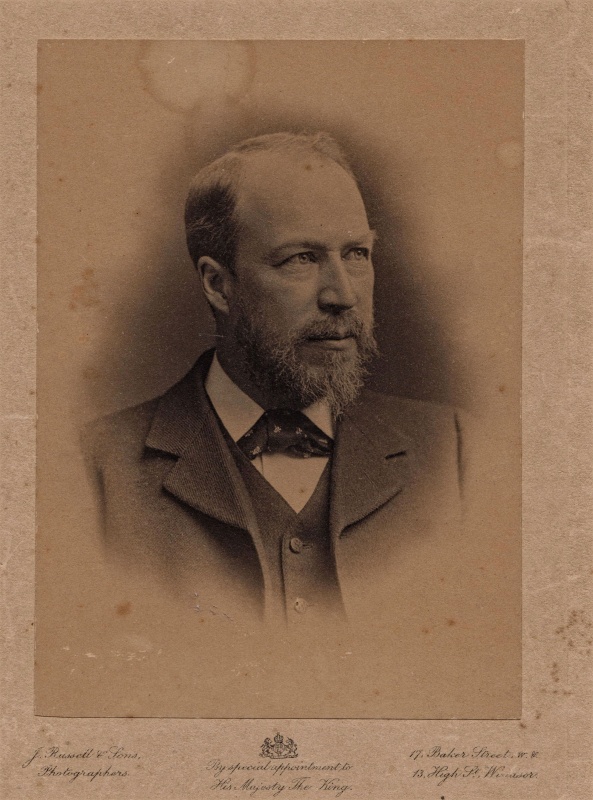 Charles Harford Lloyd was born on 16th October 1849.  He was the youngest of the nine children of Edmund and Catherine Lloyd who had been living at Fairfield House for some time.  He became a distinguished organist and composer.

Charles received his first instruction from a governess.  For his general education he attended the Thornbury Grammar School.  His musical instruction must have begun very early as when he was only ten years old he played the organ at Rangeworthy Church where his brother-in-law, Rev E. G. Penny, was the vicar.  As a boy he also officiated at the near village of Falfield.  In 1864 (aged 13) he took lessons in pianoforte and harmony from Mr John Barrett of Bristol.  From 1865 to 1868 young Lloyd was a pupil at Rossall School in Lancashire.  While at Rossall School he composed the school song “The Carmen.”  This is still sung at school events, including Old Rossallian dinners and end of term assemblies.  Tradition has it that when singing it one must stand up on a bench or chair and “belt it out” with appropriate gusto.  Usually the first verse is the only one to be sung.

Lloyd took up an open classical scholarship of the value of £40 per annum at Magdalen Hall (now Hertford College) Oxford in 1868.  Theology was then his main interest and he had a hankering after ordination.  He took his B.A. degree in 1872 taking a second class in Classical Modulations.  He took his degree of Bachelor in Music at Oxford in 1871.  Whilst he was an undergraduate he and his friend Hubert Parry founded the Oxford University Musical Club, and he became its first president in 1872. Throughout his life he always had an exceptional fine gift of extemporisation on the organ, and it is said that when in Gloucester one day he was given the opportunity to play the cathedral organ.  The cathedral’s organist Dr Samuel Sebastian Wesley by chance heard him play and expressed some words of commendation.  These comments were remembered after Wesley’s death in 1876, influencing the Dean and Chapter of the cathedral to take the unusual step of appointing Lloyd, an amateur organist, as Wesley’s successor with a salary of £150 per annum and a house.

In September 1882 he returned to Oxford as organist of Christ Church Cathedral and lecturer in music at the college.  In the same year he conducted the Oxford Choral Society and the Oxford Symphony Concerts, the latter until 1886.  From 1887 to 1892 Lloyd taught organ and composition at the Royal College of Music.  He resigned this post to become Precentor and Musical Instructor at Eton College in 1892.  We understand that he performed more than once for Queen Victoria.  He was elected president of the Royal College of Organists in 1911.

In 1914 Charles left Eton to become the organist of the Chapel Royal at St. James Palace.  The Eton College Chronicle of May 14th 1914 marked his departure with a poem entitled “Carolo Lloyd;” (Carolo of course being Latin for “to Charles”)

“Incomparably well, they said you played,
Those Wykehamists who told us long ago
That Eton had not anything to show
so perfect as the music which you made
Now you have left us.”

For those of us without the benefit of an English public school education “Wykehmists” are pupils of Winchester.
In his new post at St James’s Palace he would often take part, as organist or conductor, in performances before the Court.  Amongst the people Edward taught were George Robertson Sinclair (the “GRS” of Elgar’s Enigma Variations), Sir Arthur Herbert Brewer, Frederick Kelly, Edward Dent, George Butterworth and Caroline Alice Roberts who was to become Mrs Edward Elgar. Lloyd’s most famous composition was “Hero and Leander” composed for the Worcester Festival in 1884.  He also composed “Praised Be the Lord Daily” an Anthem for Harvest or General Use, which he dedicated to his sister, Florence Kathleen.  Charles died suddenly on 16th October 1919, his 70th birthday, at his home “Hillcrest” in Slough.  His funeral took place at Eton College and he was buried in Eton Cemetery.

Read more about the other children of Edmund and Catherine Lloyd