This page only deals with one of the several Clutterbuck families living in the Thornbury area, specifically that of James William Clutterbuck, postman and shoemaker of School House, Gillingstool.

James William Clutterbuck was born on 2nd January 1865 and baptised on 20 June 1865 by his mother, Mary Ann Clutterbuck.  Mary Ann was the daughter of Isaac Clutterbuck.  Click here to read about Isaac

In the June quarter 1866, a year after James’s birth, his mother married James Buck, an agricultural labourer.  The 1871 census shows James and Mary Ann living at Baden Hill, just outside Thornbury.  It is interesting to see that in this census and the 1881 census, James used the name of ‘James Buck’.  Mary Ann died aged 32 and was buried on 16th April 1873.  The 1881 census shows James had left his stepfather and brother, William, at Baden Hill and he was now an apprentice cordwainer living with Henry Williams at Pullins Green, Oldbury.

On 28 February 1891, James William Clutterbuck married Florence Pursey in St Mary’s Church in Thornbury.  James was aged 24, and Florence was a servant aged 18.   Florence was born on 30th July 1873, the daughter of Charles Pursey, tailor and his wife, Emily.  We don’t why John reverted to the name of ‘Clutterbuck’ rather than ‘Buck’.

In the years following the census James and Florence had several more children – the school records show: Florence Rose in 1901, Norman Shaftsbury in 1904, Hilda Ida in 1906, Francis Edward C born in 1906, Katherine Margaret (Catherine L. M.) born in 1911, Athelstan Lloyd on 17th April 1913, and Kenneth Maxwell was born on 23rd May 1917.  That makes at least 11 children who survived to school age.  We know that they had at least one child who died young – this was William Victor James who died on 26th October 1900 aged 3 years.

It is interesting to see that in the 1911 census James, Florence and nine of their children were living at 3 Horseshoe Lane which had only FOUR rooms.  It appears from this census that their daughter Sarah Primrose was recorded under the name of ‘Clara’.

The school entrance records show that the family continued living at Saw Mill until at least 1906, then they are shown in Bath Road in 1908 and in School House, Gillingstool from 1910 until at least 1940’s.  They are shown in Horseshoe Lane in 1925 and 1932, but we assume that this also refers to School House which was later numbered 3 Horseshoe Lane when street numbering was introduced in the 1950’s.

The War Pensions Records show that at the outbreak of the First World War, James was one of the first men to enlist which he did in Bristol on 7th August 1914.  He enlisted for four years in the 4th Battalion Gloucestershire Regiment.  By our reckoning James would have been 49 years old at this time, but his enlistment papers show he gave his age as 42 years 6 months.  He must have been determined to serve his country!  The army doctor declared him fit so he was accepted.  We don’t know what happened to James, but his time in the army only lasted 1 year and 343 days.  He was discharged ‘being no longer physically fit for further war service’ and was awarded a disability pension until 1919 on the grounds that he suffered from chronic rheumatic arthritis. 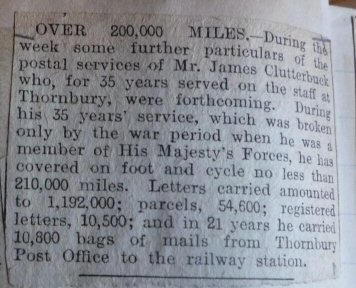 Although being unfit for war service, he proved in his fitness and served the community in other ways as the Gazette newspaper article on the right shows.

The register compiled in 1939 in preparation for the War shows James and Florence were living at School House with their children, Linda and Lloyd.  Lloyd was described as a fitter’s labourer.  There were three other people listed in the 1939 register as living with James and Florence but their names were blacked out.

In 1941 James and Florence celebrated their Golden Wedding.  The newspaper report shows that they were still living at School House where the party took place.  One guest at the party was Miss F. Smith of Morton who was a bridesmaid at the wedding.  The report mentions that James served the Post Office for 35 years before he retired in 1925.  At the time of their Golden Wedding, James and Florence have 11 children living, 22 grandchildren and 2 great grandchildren.

Norman Shaftsbury Clutterbuck – was born on 17 April 1904, the son of James and Florence Clutterbuck.  In 1931 Norman married Gwendoline Howell in the Wesleyan Chapel.  She was born on 29th August 1910, the youngest daughter of Charles Howell of Crossways.  By 1932 they were living at 10 Pullins Green.  Norman worked as a gardener.  The Council School record shows that they had a son, Vernon Shaftesbury Howell Clutterbuck born on 28 September 1932.  They had 2 other sons: Dennis and Ronald.  At some time after 1970, Norman moved away from Pullins Green to the flats in Gloucester Road.  Norman died in 1997.

Katherine Margaret married Reginald Wheeler at Thornbury Methodist Church in the December quarter of 1934. Their photograph appeared in the Gazette of January 5th 1935. She died in 2006.

Olive May married Andrew Callard in Thornbury in 1915.  They had a daughter, Betty, born in 1916 who started at the Council School in 1921 whilst she was living in School House under the guardianship of Mrs (presumably Florence) Clutterbuck.  She left school later in the year to move to Bristol.  Olive died in 1960.

Sarah Primrose – was born in 1900.  She married William Henry Billett in December quarter 1919.  Click on the thumbnail on the right to see a photograph of the wedding with some names of people whom have been identified.  Sarah died in 1982.

Kenneth Maxwell – was born in 1917.  The Gazette printed a report on 11th June 1938 of Kenneth’s 21st birthday party.  It was held at the Picture House cafe and music was provided by the New Syncho Five Dance Band.  His father spoke and sang ‘We are the Gloucester Boys’.  At the time Kenneth was employed as a postman and the party was attended by six other postmen.  Kenneth died in 2000.

Athelstan Lloyd – was born in 1913.  Athelstan seems to have been known as “Lloyd. ”  We believe that this is the young man who got into some mischief (unless it was a sign of the difficulties experienced by ordinary Thornbury people in the 1930s).  The Western Daily Press of 22nd January 1933 had an article headlined “Trail of Feathers leads to arrest : P.C. Too Smart for Thornbury Youths.”  Althelstan was probably one of three lads who took four live chickens from a chicken house owned by John Taylor.  The lads were obviously not hardened criminals as the policeman simply had to follow a trail of feathers to catch the young thieves!  Because of their previous good character they were put on probation and ordered to pay the cost of the fowls and the court costs.