and his wife Mary Louise 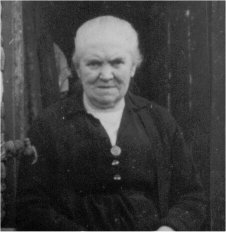 William married Mary Louisa Neems in Bath in June quarter 1890.  It is interesting that she seemed to use her each of her two forenames at different times.  In 1891 and 1901 census, she is referred to as ‘Louise’.  In the Thornbury Trade Directories when she was running the grocers shop following William’s death, she is listed as ‘Mrs Mary’.

Mary (shown in the above photo) was born in Sherston, Wiltshire on 12th December 1864.  She was the daughter of John and Matilda Neems, who farmed under the Duke of Beaufort at Wick Farm, Luckington, Wiltshire.  In 1891 William and Mary were living in 66 Gloucester Road, Horfield in Bristol.  William was described as a stationer and tobacconist.  William and Mary appeared to move around a bit after their marriage – their first child, Elsie Rose was born in Iron Acton later in 1891, and their second child, Hannah Elizabeth, was born in Cromhall in 1893.  The family have moved to Thornbury shortly after.  In 1894 they were living in a dwelling house with shop at the top of St Mary Street at the back of the Exchange public house (it was shown as Plot 147 on the 1840 Tithe Map).  When this property was put up for sale in 1894 ‘Mr Clutterbuck, a grocer’ was shown as being a tenant at the yearly rent of £12.

The 1911 census shows William as a shopkeeper.  All their children were living with them.  The baptism records of Matilda and Edward show that William as a labourer so he seemed to be going out to work to supplement the income from the shop which Mary must have been looking after.  William is also shown as being a ‘distress bailiff for the county court’ in a 1914 trade directory, on the marriage certificate of their daughter, Elsie Rosa, who married Albert Victor Williams in 1917 and when Mary Louise joined the Grammar School in 1919.  When another daughter, Matilda Louisa, married a soldier, Albert John Reeves in 1919, William was described as a postman.

William died on 26th February 1923 aged 61.  His obituary in the Gazette referred to the fact that he had been well known in the Berkeley Hunt district and had been in charge of the terriers in the Thornbury district meets.  It mentioned that his love for the sport was reflected in the fact that he named his first son, ‘Huntsman’.  He was also well known as a cricket umpire, often officiating at the matches at Thornbury Cricket Club at the time that Dr Edward Mills Grace was playing there.  The following thumbnail sketch about William’s involvement with the Cricket Club was written by Edgar Mervyn Grace and we are grateful to Les Summerfield, the Cricket Club and Mike Grace for allowing us to use these notes:

William Clutterbuck – also a useful wicket-keeper, who was greatly handicapped by the position of his feet which pointed outwards instead of forward, so that he was nicknamed ‘A Quarter to Three’.  He could occasionally make runs when they were badly needed.  In later years he held the position of Terrier Man to the Berkeley Hunt, very successfully knowing and covering the country in great style in spite of his disability.  He was a true countryman and enjoyed all country sports, and on his retirement from cricket became a good umpire, also acting as baggage man and kind of valet to E.M. Grace in his declining years.  He lived in St Mary Street, Thornbury and died in 1922.

Mary carried on with the shop for another 20 years before moving opposite to her daughter in 5 Gloucester Road.   On 1st October 1942 Mary sold the house and shop for £925 to the Roman Catholic Church.  Mary was then aged about 78 and she died at home in Gloucester Road a few years later on 27th September 1948 aged 83 years.  She and William are buried in Thornbury Cemetery.

Click here to see a collection of photos of the family

Elsie Rose – the 1911 census shows Elsie had become a schoolteacher.  She married Albert Victor Williams on 20th February 1920.  Albert was a farmer from Tytherington and the son of Robert Williams, a farmer.  The wedding report in the Chronicle shows Elsie had been an infant school teacher at Oldbury for 4 years and was also a Sunday School teacher in Thornbury.  The wedding was particularly quiet because Elsie’s brother, Harry, was severely wounded in the War and was in hospital at the time in London.

Mary Louise – obtained a scholarship to the Grammar School.  She started there on 16th September 1919.  She left on 27th July 1925 and the school record shows she left to become a book keeper in a firm of butchers.  Mary married Leonard Charles Smith on 26th October 1935.  Len was a carrier and he and Mary moved to live at 16 Gloucester Road and then 1 Rock Street.  Click here to read more

Thomas Henry (Harry) – Harry was the first recruit at the first recruiting meeting at Thornbury joining in November 1914 at age of 17.  He joined the 4th Gloucestershire Regiment, transferred to Cycling Company and sent to France in June 1916.  He was put into the Infantry and was wounded by shrapnel in July 1916 and sent to Manchester Hospital for a month with a wounded hand.  The photograph on the right shows Harry in his army uniform.  He was sent to France again in the 10th Loyal North Lancashire Regiment and was severely wounded on 26th January by a bomb.  He was in a Clearing Hospital for two weeks and then sent to the Metropolitan Hospital in London for seven weeks.  His wounds were too severe to recover.  His mother was with him for the two weeks in which he seemed to get a lot better, but soon after parting Harry had a relapse and died on 6th April 1917.

In their obituary printed on page 5 of the South Gloucestershire Chronicle 13th April 1917 they said Harry was a promising lad, regularly attended Thornbury Church Sunday School, was doorkeeper at the Church for some years and an organ blower at the time he joined up.  Thomas Henry joined the 4th Gloucester Regiment in August 1914.  He was wounded in July 1916 and sent home to hospital in Manchester.  When he had recovered by December he was transferred to the 10th Royal North Lancashire Regiment and sent back to the fighting.  In January he was wounded again and sent home to the Metropolitan Hospital in London where he remained until his death on 6th April 1917.  He was buried in Thornbury Cemetery.

Hannah Elizabeth – the 1911 census shows she had become a draper’s apprentice.  She married John E Atter in 1918.

Edward John (Jack) – we have a nice little story about Jack from his time at the Council School – apparently he caused a waterspout to collapse in the “boys offices” while retrieving a golf ball.  No mention is made of the punishment for this offence but it would have been par for the course if he received a few strokes!  Jack married Phyllis Doreen Clarke at Oldbury in September 1932.  On the left is a thumbnail image of the newspaper report of the wedding.  Please click on it for a larger image. We have been told by Matthew Riddle that Phyllis was born and bred at West End Farm in Oldbury.  The electoral registers show that they lived in Sunnyside, Crossways in 1935 and Wellfield on the Kington Road in 1938.  Jack was a motor engineer and for some years ran the Paragon Motor Works garage further down St Mary Street which later became Thornbury Motors.

William Huntsman – the 1911 census shows Huntsman had become a carpenter’s apprentice.  Huntsman joined up in August 1914 and served with the Royal Engineers.  On his return he developed several business interests in the Bristol area before becoming the publican at the Chew Stoke Inn, Chew Stoke.  The Western Daily Press of May 29th 1924 reported that Mr Huntsman Clutterbuck was going up Alveston Hill on a motor-cycle when he was involved in an accident with a petrol lorry and sustained a fractured leg and other injuries.

Notes taken from the records of the Methodist Church show that the Clutterbuck family were closely associated with the Methodists.