The family of Goliath and Julia Cole 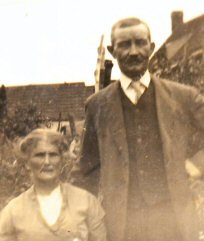 From the early 1900s Goliath and Julia Cole occupied the house which became known as 11 Rock Street.  The earliest record of them living there is the 1914 Prewett’s Street Directory and when their son, Sidney, started at the Council Upper School in 1915.

Goliath Cole was born in 1873.  He was the son of Albert and Jane Cole, a family of Romany travellers who moved around parts of Southern England, including Hampshire and Sussex.  Goliath appears to be named after his uncle, another hawker, called Goliath Cole.  The 1881 census shows Albert, a general dealer and hawker, and Jane living with their six children in a traveller’s caravan in Ellesford near Basingstoke.  It is interesting to see that the family had a domestic servant who was also living with them.

The 1891 census shows the family now living in a tent in the Burnt Common Encampment.  The census enumerator commented against all the family ‘apparently no occupation’.  Albert and Jane still had six children living with them, including two young ones born since the last census.  There was no reference to a servant living with them in their tent at this time.

The 1901 census shows Goliath had moved to Thornbury in a two-roomed dwelling in Gillingstool.  The census record shows that Goliath was living with his wife, Julia, aged 22 and born in Binsted and their daughter, Gertrude aged 1 born in Basingstoke and a visitor Alice Engfield aged 12 born in Basingstoke.

Information available on the internet suggests that the folk song collector George Barnet Gardiner met Goliath’s mother Jane Cole with Goliath and his brothers Frank and Jesse in Hampshire.  In 1908 Goliath seems to have sung George Gardiner some verses of “The Oakham Poachers” which were later published by Frank Purslow in 1977 and recorded by John Kirkpatrick as part of an album “Shreds and Patches.”

The 1911 census shows ‘Golias’ and Julia Cole living in Rock Street.  Based on the sequence shown in the census we believe that he was living at 17 Rock Street at that time, but it is possible that this was wrong and he was in fact already living at 11 Rock Street.  Golias was a general labourer.

The marriage records show that Goliath married Julia in the Alton District of Hampshire (which includes Binsted) later in 1901.  Julia was born on 17th April 1878, the daughter of Luke and Jemima Dixon, another family of travellers who in 1901 were living next door to Goliath and Julia in Gillingstool.  Goliath and Luke were both described as ‘clothes peg makers’.  The Cole and Dixon families had already been connected by marriage when Goliath’s brother, Thomas Cole, married Edith Dixon, Julia’s sister in 1894.  Click here to read about the Dixon family

Goliath and Julia had a number of other children: Susan who we think was born in the Basingstoke area on 7th October 1903, Sidney Moses born on 9th August 1908, Frank born in September quarter 1911, Edward born on 27th July 1914, Elizabeth Kate born on 16th September 1916, and Irene born on 8th June 1921.  It is interesting to note from the records of the Council Upper School that Goliath was sometimes referred to as ‘Gilbert’ and we understand he was called ‘Gill’ by his family.

Life was very probably rather hard for the Cole family.  Their income must have been uncertain and prejudices still exist against gypsy families.  The Gazette of January 19th 1929 says that Goliath Cole and Frederick Messenger were charged with the theft of two chickens from William Jenkins who lived in The Hackett.  William’s three children gave evidence and two of those were deaf and some evidence had to be accepted in writing as communication was so difficult.  The trial seems to have been rather unsatisfactory and charges were dismissed against Goliath and Frederick through lack of evidence.  Goliath was the only defendant to speak; “I am innocent and I haven’t been saucy have I?”

Of their children, we know that:

Kate, as Elizabeth Kate Cole was known, went to Thornbury Grammar School.  Although she continued living in Thornbury for many years to look after her mother, she had a successful career in nursing.  Kate became a deputy matron at Southmead Hospital.  We understand that she was awarded a medal for ‘staying at her her post during the air-raids’.  She married Joe Harman, a barber from Bristol and they lived in the Horfield area of the city.  She eventually moved to work as Sister Harman at Thornbury Hospital. 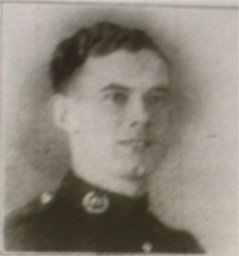 Frank – when he left school, for a short time he became a gardener at Thornbury Castle and then moved to Bishops Cleeve near Cheltenham where he became a groom for Colonel Masters at his hunting stables.  He went on to become a chauffeur for Colonel Masters and then moved to work as a chauffeur at Twyning Manor, near Tewksbury where he met his wife, Frances.

In 1932 Frank joined the Royal Marines and became a machine gun instructor.  He was posted to the Far East and served for four years in China.  In 1941 Frank was in Hong Kong at the time of the siege by Japanese Troops and Frank had the honour of being ‘mentioned in dispatches’ for his bravery there.  The family were to hear that Frank was reported missing and it was some time before they heard that he had been taken prisoner by the Japanese on Christmas Day 1941.

Frank was kept a prisoner on Hong Kong until 27th September 1942 when along with over 1800 other prisoners he was put on board the ‘Lisbon Maru’, an old Japanese freighter which had been converted for the purposes of carrying large numbers of prisoners and/or troops.  The prisoners were told “You are going to be taken away from Hong Kong to a beautiful country where you will be well looked after and well treated”.

The Lisbon Maru was later described as being one of the ‘Hell Ships’.  There was not sufficient room for the men to be able to lie down all at the same time so sleeping was to be achieved by rota.  Drinking water was rationed and water for washing was non-existent.  The latrines consisted of wooden hutches hanging over the side, too few for the numbers on board.  Also on board were 778 Japanese soldiers.

The Lisbon Maru carried no markings to indicate it was carrying POWs and on the night of 30th September 1942, it was hit by one of several torpedoes fired by the US submarine ‘Grouper’.  The Japanese troops were taken off by a Japanese destroyer, but the POWs were left battened down in the holds of their sinking ship, guarded by a small group of Japanese.  They stayed there for 24 hours until it became clear that the ship was going to sink and they forced a breakout from the hold.  Some men started swimming to nearby islands but many were killed on the rocky coast or shot at by the Japanese.  By the end of the day 825 men had died, either on board the ship or in the waters around it.

Fortunately for Frank, he was one of the lucky ones who were eventually picked up by Japanese boats.  He was taken to Shanghai and then on the SS ‘Shinsei Maru’ to Osaka on the Japanese mainland where he was put to work on the docks.  His troubles weren’t over.  He survived two earthquakes here and being bombed by the US airforce after he was moved to Kobe.  At the end of the War he was repatriated by way of the USA and Canada and being shipped home to the UK by the Queen Mary.

After the War, Frank was reunited with his wife and was able to meet his eight year old son, David, for the first time.  His wife had been in the advanced stages of pregnancy when he left and she had had to bring up the child for eight years not knowing what had happened to her husband.  David went on to become a senior member of West Mercia Police.  Frank died in 1970.

Edward – joined the Royal Navy on April 17th 1934 at the age of 20 and served eight years in the submarine service.  He was a Petty Officer Stoker serving on H. M. Submarine Simoon when he was reported missing on November 30th 1943.  In May 1945 his family were notified that he was presumed dead.  The Simoon was sunk on 19th November 1943 in the approach to the Dardanelles – one report says that it was sunk by German U-Boat 565 and another report refers to it being sunk by a mine.  All crew were lost.

Edward had served previously on the H.M.S. Graph, which had been the German U-boat 570 captured by Royal Navy, refitted and re-named.  He left a widow, Maria Elizabeth Gertrude whom he married in Aberdow, Scotland on 17th August 1940.  They had one son, Anthony Richard, born on 10th June 1941 and baptised in Thornbury on 13th July 1941.  We understand they were living in Weymouth.

Sidney Moses – the register compiled in 1939 in preparation for the war shows Sidney’s family were living at 5 Rock Street.  There is no sign of Sidney, but his wife, Lilian M. and her son, Gordon E. were there, together with another entry whose details are ‘blacked out’ but we suspect that Sidney and Lilian’s son, Michael.  The register shows Lilian was born on 7th May 1910.  We note that there is an entry in the register for a Sidney Cole born in 1908 who is a patient in the mental hospital at Gloucester, but we have no way of confirming that this is the same person.

Sidney married Lilian Maud Ponting in the Chipping Sodbury area in 1933.  They had two children, Michael born on 5th February 1935 and Gordon born on 28th February 1936.  The school record show that when Sidney’s son, Michael James Sonney Cole, started at the Council Infants School in 1938 Sidney was living in Bath Road.  The 1938 electoral register lists Sidney and Lilian Cole in ‘Outer Back Street’ which was another name for Rock Street.   Michael was born on 5th February 1935.  We understand that Sidney Moses may have been killed in an accident during the blackout in the War.  His death was registered in Thornbury in March quarter 1943.

Irene – married Frank Teague and they had two sons, Beverley John born on 29/10/1942 in Thornbury and Richard born in 1952 after the family had moved to Bewdley.  We have been told that Irene was an usherette in Thornbury Picture house during the Second World War.