Watchmaker and Publican of Thornbury 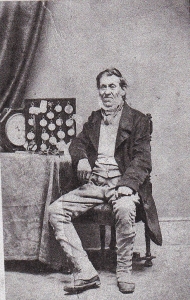 Harris Collings with clocks and watches

Harris Collings who lived at “Lion House“ in Castle Street in Thornbury was the son of the watch and clock maker Samuel Collings.  Harris’s father Samuel was a tenant next door at number 7 Castle Street and his brother Alfred Jenner Collings lived at 3 Castle Street.

According to the 1871 census Harris was born in Downend in Gloucestershire about 1818.  The 1861 census says that he was born in Trowbridge.

The 1841 census shows that at that time Harris was a clockmaker in Lydney.  He married Harriett Gabb in the Chepstow area in the March quarter of 1842.  According to the IGI Harriett was born 3rd May 1813 and christened 25th May in the Nonconformist Independent Chapel in Frampton on Severn.  Her parents were John and Ann Gabb.

In 1861 the census shows that the family had moved to Redcliffe in Bristol and that Harris had slightly changed his job description.  At this time he called himself a pawnbroker and silversmith.  This Census also says that Harriet and her eldest daughter came from Coleford and that Harris was born in Trowbridge rather than Downend.

Harris bought the “Lion House” at 9 Castle Street in Thornbury from Charles Prewett on 17th September 1862, but he does not seem to have moved in immediately with his family to taken up the role of publican.  Instead the rate book of 1862 shows that although Harris Collings is the new owner (Charles Prewett’s name is crossed through), the occupant was Samuel Crew.  On the left we have a thumbnail image of a photograph of Harris Collings sent to us by a family member, Michael Collings.  Please click on it for a larger image.  Michael tells us that the photograph was probably taken in the 1860s.

On the 27th April 1868 Harris Collings mortgaged his property in Castle Street to the Rev. Francis Barnes of Trinity Parsonage, Plymouth and John Crowther Gwynn of Bristol, gentleman, for £300 from a joint account.  On the 27th April 1871 the mortgage was transferred to a joint account held by Francis Barnes, John Crowther Gwynn and George Westhorp a solicitor of Bristol.

The rate book of 1867 shows that Samuel Crew had moved out of the Black Lion and into the White Lion in the High Street.  Harris Collings now occupied the house and presumably ran the pub.

The 1871 census confirms that the family had moved from Bristol to Thornbury and describes Harris Collings as having been born in Downend and now aged 52 years.  His trade was now a publican and his address in the Census was the Black Lion in Castle Street.  This is the first formal reference we have seen of the pub being called the “Black Lion.”  Harris’s wife, Harriet Collings, was aged 57 and she was now said to be from Frammilode in Gloucestershire.  They had a daughter Elizabeth Harriett then aged 20 who was born in Newport, Monmouthshire as was her sister, Louisa Jane aged 19.  In the household there was also a two year old grandson Harris Henry Eley from Berkeley.  Harris Henry Eley was the son of Harris’s eldest daughter Harriet Fletcher Collings who had married Henry Eley, a saddler and harness maker from Berkeley in Bristol in 1867.  Harris Henry Eley later became an electrician.  He was killed in a road traffic accident on Porlock Hill in Somerset in August 1900.

On 3rd June 1871 there was an announcement in a newspaper of an auction on Wednesday 14th June 1871 of four Lots all of which appear to be owned by Harris Collings.  The first Lot was what is now The Lion House and was then called the Black Lion and described as –

“all that convenient and substantially built Freehold Messuage or Dwellinghouse on the South-west side of Castle Street, Thornbury, now and for the last 18 years used as a Public-house and called the Black Lion, in the occupation of the proprietor Mr Harris Collings.  The House comprises two front parlours, bar large smoking room with room over; kitchen, back-kitchen or brew-house, good underground cellar and five bedrooms with other usual domestic offices; also a large cistern of water with pump. adjoining the house is a newly-erected building 34 feet by 21 feet, easily convertible into a separate Dwelling-house or shop or to other purposes.  There is a carriage- entrance from the street, a well paved yard, coach-house, four stall stable, fowl house, piggery etc, with a most productive garden, the whole presenting a frontage to the street of 69 feet and a depth of 115 feet.  This lot from its eligible situation for business or private purposes, presents an opportunity for occupation or investment seldom met with.”

It does not seem that this house changed hands at this time as Harris Collings still appeared to own it when he died the following month.  It is possible the sale did not take place.  It is not known at this time whether this also applies to the other properties owned by Harris Collings and advertised for sale at the same time which were;

1) A house in the High Street near the railway station that was about to be erected with a shop, a parlour, three bedrooms and a small garden. (This was the house later known as 46 High Street).

2) A house with a shop in the market place of the High Street occupied by John Marshall a boot and shoe seller.  The house had two parlours, five bedrooms kitchen and workshops a brewhouse and a garden. This is now 14 High Street

3) the adjoining house to 2) with a shop, a parlour, four bedrooms, workshop, kitchen and back kitchen and courtyard in the occupation of Samuel Smith a tailor. The last two houses shared a drive way to a back entrance.

When Harris Collings died suddenly and intestate on the 4th of July 1871 aged 53, he left a widow Harriet and three daughters.  The daughters were Harriet Fletcher Eley, Elizabeth Harriet Collings of Thornbury, spinster, and Louisa Jane Collings of Thornbury, spinster, co-heiresses at Law.  Letters of administration were granted to Harriet, the widow, on the 11th of September 1871.  Knowing that it would have been the wish of Harris Collings to make a will in favour of his wife and not desiring to avail themselves of their rights as co-heiresses his daughters agreed to have the property conveyed to trustees with power to sell at any time during the lifetime of his widow, with her written consent, and after her death, at the discretion of the trustees.  On the 20th of March 1872 Henry Eley, the son-in-law, and James Virgo of Thornbury, auctioneer, were appointed trustees.

Harriett remained in the house and the 1877 gas rate book shows Harriett Collings lived in the property and that it was owned by herself.  Harriett also appears in the trade directory of 1877 as a beer retailer in Castle Street.  On the 10th of November 1879  the mortgage  was once again transferred with Humphrey Thomas Martin Crowther Gwynn of Bristol, gentleman, replacing George Westhorp as one of the mortgagees.The 1881 Census shows Harriett Collings then aged 69 and a widow living in the Black Lion Inn with her married daughter Elizabeth Johnson, then aged 28 and born in Newport Monmouthshire.  Elizabeth had married William Johnson (also known as William Penduck) a cabinet maker aged only 20.  Also living in the Black Lion at this time were Henry Withers a boarder aged 70 who was a gardener, Henry Eley, a visitor aged 40 from Berkeley and Emily Essex a servant aged 15.  Henry Eley, although described as a visitor was actually Harriett’s son in law.

“yesterday the mortal remains of Mrs Harriet Collings of Thornbury were interred in Arno’s Vale Cemetery in Bristol. Nearly all the shops here were partially closed in token of the respect in which the decease was held. The body, followed by a large number of mourners was first taken to the Baptist Chapel in Thornbury where the deceased worshipped and a special service was held, the officiating ministers being the Rev G Rees and the Rev C Gayler. At the conclusion of the service the deceased was conveyed to the Arnos Vale Cemetery and interred.” On 5th February 1882 the newspaper recorded that the licence of the Black Lion was then transferred to William Penduck (Harriet’s son in law).  A newspaper report of 4th May 1882 recorded the transfer of the licence of The Black Lion from William Penduck to Charles Liddiatt.  The property was then advertised for sale on 7th March 1883 in The Bristol Mercury as “The Black Lion” and in the yearly tenancy of Mr Charles Liddiatt at £32 per year on behalf of the trustees.  Click on the photograph on the left hand side to read the advertisement.  The Black Lion must have failed to sell because the newspaper the following day said that the public house and premises “was bought in at £460.”

Children of Harris and Harriet Collings

On the 6th of June 1883 the “Lion House” then known as The Black Lion was sold by the trustees of the Collings estate to John Clark James of Thornbury, a veterinary surgeon, for £465.  The sum of £300 was still owing to the mortgagees, Francis Barnes and Humphry Gwynn and it was agreed that this sum should be paid out of the purchase money.

At the time of the transaction the occupant of the Black Lion was Charles Liddiatt of Oldbury who had taken on the running of the beerhouse after the death of Harriet Collings in 1882.  The Collings family owned other properties of greater value than the “Lion House” and these had recently been sold to John Weatherhead of Thornbury, a draper.  Since they had been included in the deed of 1872 appointing Henry Eley and James Virgo trustees, it was decided that John Weatherhead as purchaser of the more valuable properties should have custody of the deeds but should produce them on demand should John James require them.

The Black Lion ceased to be a public house.  According to Frederick Henry Burchell in his description of Thornbury in the closing years of the 19th century, John Clark James had the old Black Lion demolished and a new house built on the site. (see H.W. Phillips, “Thornbury, Pages from the Past” p.12).

In 1884 there was an advertisement in the Bristol Mercury of Wednesday 19th March 1884 for the stock of the “Black Lion” belonging to the estate of Charles Liddiatt.