The previous owner of Wigmore House, 10 Castle Street, in Thornbury, Edward Long was unable to pay back the money he borrowed to buy the land and houses purchased by him in 1858.  Accordingly all the property, including Wigmore House, was put up for public auction at the Swan Hotel in Thornbury on 1st August 1863.

A Schedule in the deeds of Wigmore House held by its owners which was photographed by a researcher from Thornbury Museum, Heather Palmer, says that at this auction Susanna Cornock bought Lot 1 for £840.  This lot included Wigmore House.  Of the sum of £840, £84 went to Robert Lawrence who had taken over the mortgage that Edward Long had from Edward Burges, the then trustee of the Bristol Building Society.  The bulk of the purchase price £756 went to OE Thurston and W Gaisford to buy out the requirement to pay an annual charge of £104 rent which had previously been payable to George Fewster.

As well as the house itself, the Lot that Susanna Cornock bought included “the court yard, lawn, pleasure gardens, greenhouse, stables, coach house and other outbuildings, and yard” and “all that orchard or parcel of ground behind the said messuage or dwelling house planted with fruit trees” and the kitchen garden “which comprised the said garden containing 29 perches and part of the said close of land called Mondays Land otherwise Johnsons Grounds numbered 297 on the said map”.

We are grateful to a researcher of the Cornock family called Sue Stead who has provided some of the following details about Susanna Cornock and her family.

In 1841 the census shows that they lived in the Almondsbury area.  Ann married William Collins Bennett in February 1849 at Aust.

The 1851 census shows the remainder of the family lived in Aust, which was presumably Tan House Farm, the family home for many years.  Nicholas was 70 years old and a farmer of 149 acres born in Berkeley.  His wife Elizabeth was 64 and born in Hill.  The children living with them at that time were Elizabeth, who was 31 years old, Susanna aged 28 years and William also 28.  They had other children including Mary, who married John Wetmore, and Sarah.  Susanna seems to have moved with her parents to Hackett House near Thornbury, soon after the 1851 census as her father, Nicholas, died there in 1860.

The 1861 census shows Susanna lived with two of her sisters, Elizabeth and Rosa, and their 74 year old widowed mother, Elizabeth in Hackett Lane, presumably at Hackett House.  Susanna then bought Wigmore House in 1863.

By her will of 8th June 1864 Susanna Cornock gave and devised all her real estate to her brother in law John Harding of Gossington Hall in the Parish of Slimbridge in the County of Gloucester and her friend William Cullimore of Shepperdine in the parish of Thornbury.

Elizabeth Cornock the elder moved into Thornbury from The Hackett, probably around 1864, and by the 1871 Census she was living in Castle Street not at Wigmore House but further up the Street in number 4 Castle Street.  Joseph Sturge may have moved out of Wigmore House soon after the census of 1871 because we have been told that Elizabeth Cornock the elder died there on 6th April 1873.  She was buried in Chancel of Aust Church, near Thornbury.

On 8th March 1874 Sarah, who was a sister of Susanna Cornock died in Thornbury and again we have been told that she died at Wigmore House.

The rate book of 1876 shows that the owner and occupier of the house was now Susanna’s sister, Elizabeth Cornock.

The 1880 rate book shows that Elizabeth Cornock (the younger) owned and occupied a house and garden in Castle Street (which was Wigmore House) and also showed that she owned a piece of land in Castle Street. 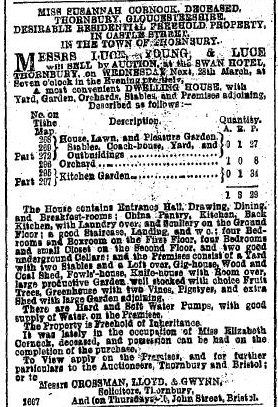 The 1881 census shows that the house was occupied by Elizabeth Cornock an unmarried lady of 61 living on income from land.  She was born in Aust.  She was sharing the house with her sister a widow called Mary Wetmore aged 70, also living on income and also from Aust.  They had a servant called Florence Ford.

The 1891 census shows that Elizabeth Cornock, who was by then 80 years old was living with a companion Sarah Poole aged 70 from Bedminster.  Elizabeth Cornock died on 25th February 1894 in Wigmore House in Thornbury aged 84.  We have been told that her death was the result of an accident.  This was confirmed by a report in the Bristol Mercury in February 1894 of an inquest conducted by Doctor E M Grace at the Swan Hotel on the body of Miss Elizabeth Cornock

“who died at her residence on Sunday last from effects of injuries received through falling down stairs.  From the evidence of the deceased lady’s servant and a female attendant it appeared that the deceased had been an invalid for several years past and whilst going upstairs on Friday afternoon shortly after three o’clock she fell on the stairs knocking her head against the wall.  She remained unconscious until her death which resulted as stated on Sunday morning.”

Under the term’s of the will of Elizabeth’s sister, Susanna, Wigmore House was left to Elizabeth for her life time and after her death it had to be sold. 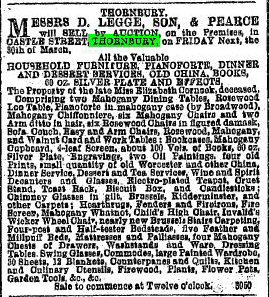 A newspaper advertisement of 10th March 1894 advertised the sale by auction of the property of Susannah Cornock deceased which was to be held on March 28th at the Swan Hotel.  The property was “all that convenient dwelling house with gardens, orchard, yard and outbuildings situate in Castle street in the town of Thornbury containing 1A 3R 29P. The house comprises entrance hall, three sitting rooms. eight bedrooms. kitchens and usual offices with pumps for hard and soft water.”   A more detailed advertisement appears on the right.

The sale of what is now called Bank Cottage (14 Castle Street) was also advertised to be sold the same day; “all that valuable freehold dwelling house and offices formerly used as the Thornbury Bank situate in Castle Street Thornbury and containing two good sitting rooms, fireproof room, kitchen pantry and coal house three bedrooms and cupboard and large underground cellar. Adjoining is a small courtyard and WC.”

On 30th March all the household effects were also due to be auctioned.

A newspaper report of 31st March 1894 gave an excited account of the sale of the Cornock property for a very high figure indeed £1210.  The article says that the property was sold to Dr Lionel Williams.  Click on the image on the right for a detailed report.

However the only document we have found in the notes made by researchers of Thornbury museum regarding Wigmore House which cover that period was an indenture dated 25th June 1894 between William Cullimore, the surviving trustee of the will of Susanna Cornock and John Crowther Gwynn.  This conveyed the house to John Crowther Gwynn for £600.  This fact is supported by the 1899 rate book which showed that J C Gwynn owned Wigmore House and that it was occupied by Mary Till.

read about the other owners of Wigmore House