Richard Cossham and his family

including son Jesse and grandson Handel

Richard Cossham was born in 1748, one of the nine children of George Cossham and his wife, Elizabeth (nee Witchell).

We know that Richard Cossham actually lived for a time in what later became 32 High Street.  Various indentures mentioned in the Abstract of Title of that house in Thornbury refer to Richard Cossham, the carpenter living there as the tenant of Mary Whitefield.  The land tax records of 1780 to 1784 also list him as living there at that time.

We found a handwritten note in the Gloucester Records Office which appears to be an attempt at recording an abstract of title for the house (now known as Miss Saise’s Cottage).  Presumably it was written in the early 1800s when Richard Cossham owned it.  The note says that George Cossham bought this property from James Tyler with a lease and release of 1st and 2nd October 1782.  We do know that they were not living in it in the early 1780s.  By 1783 the land tax records confirm that the property was owned by George Cossham but show that it was occupied by Robert Facey with a tax of 4s 8d.  George Cossham died in 1789 and was buried on 6th May.

This means that we know Richard Cossham’s father owned the little house in the High Street.  We also know that Richard inherited it from his father.  The will of George Cossham in 1789 shows that Richard inherited, “a messuage wherein Robert Facey doth now dwell with garden and orchard in the High Street which I purchased (with other premises hereinafter devised to my son Jesse) of James Tyler.”   Richard also inherited a third equal share in his father’s ‘timber board and quarter which is saleable or such and fit to cut and work’ and an annuity of £10 to be paid by Richard’s brother, Jesse.

In 1790, after the death of George Cossham the land tax records show only that it was owned by the devisees of George Cossham.  The entry also describes the house and garden as “premises in the High Street formerly called The Fraternity and occupied by one John Baineham, and since belonging to John Hughes and now (belonging) to devisees of George Cossham deceased” and occupied by Robert Facey butcher.  The amount of rent payable was two shillings.  By October 1799 the annual rent charge of 2/- payable under the terms of the terms of the Fraternity confirms that Richard Cossham was now the chief tenant.  However, it also indicates that the property was in the occupation of Thomas Walker senior.

In the excellent little booklet about the Cossham family written and published by Susan Dean she says she hasn’t found any trace of Richard’s marriage.  He is known however to have had at least two children: Jesse was born in 1799 and baptised at Thornbury Independent Chapel on 18th July 1819.  Richard also had a daughter, Ursula born about 1803.  We note the IGI has an entry of a marriage of Ursula Shepherd Cossham (see below) which might indicate the maiden name of Richard’s wife.

Richard died on 11th March 1829 and was buried in the Independent Chapel in Thornbury on 4th April 1829.  The record in the United Reformed Church says that he was aged 81 when he died.  In his will, he made his son, Jesse, his executor.  Richard’s daughter, Ursula, received a legacy of £20.  The will also makes clear that he was living in this house with his son Jesse as it says; “I give and devise all that my messuage or dwellinghouse wherein I now dwell with the garden and appurtenances thereto adjoining and belonging situate in the Borough of Thornbury aforesaid on the east side of the High Street alias the Fore Street unto Jesse Cossham now residing with me.”

Ursula Cossham – the only daughter of Richard Cossham (see above).  According to the IGI Ursula Shepherd Cossham married William Woodham on 3rd April 1826 in Bristol.  The 1841 census shows that Ursula lived in Newfoundland Street and that her husband William Woodham then aged about 40 was a cooper.  Ursula was aged about 30 and they had four children living with them.  Of these, Mary Ann was aged 14, Edward was 10, Jesse aged 5 and Elizabeth aged 2.  The property seemed to have more than one household in it.

The 1881 census shows that Ursula Woodham then aged 78 was born in Thornbury and was still living in Newfoundland Street in Bristol with her husband William then aged 82.

Jesse Cossham – was born on 18th October 1799 and he was the only son of Richard Cossham, a carpenter (see above).  Jesse became a carpenter like so many of the Cossham family.  He married Sarah Shepherd of Thornbury (who was born in 1802).  We know from Handel’s own account that Sarah was the daughter of “John Shepherd of the Baths.”  John Shepherd married Mary Greenwood at Thornbury Parish Church on July 24th 1797.

We are not sure when Jesse Cossham and Sarah Shepherd married as we have been able to trace two different sources.  The IGI shows they may have married on 8th September 1823 at St Mary Redcliffe in Bristol.  Another source, “Wishful Thinking”, says Jesse Cossham and Sarah Shepherd may have married in Thornbury on 18 July 1819.  We are unable to confirm either source.

Jesse and Sarah had two children. Handel Shepherd Cossham was born on 31st March 1824 in the family’s home in the High Street in Thornbury.  Soon after this they moved to Ryeford near Stonehouse.  They remained there until Jesse’s father Richard died in 1829, when the family returned to Thornbury.  Their daughter Amy was born in 1838 in Thornbury.

Jesse was a man of strong religious beliefs and principles, including a support for the Temperance Movement.  In 1840 he was one of the leading members of the Independent Church in Thornbury who were named in a indenture that led to the setting up of the chapel in Crossways. 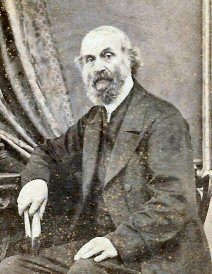 The photo on the right is believed to be of Jesse Cossham.

The 1840 Tithe Survey and the 1841 census shows the Cosshams living in the little cottage on the High Street.  Jesse was a carpenter working with his son Handel, while Sarah ran a grocer’s shop.  Their daughter Amy was only three years old.  In October 1855 Amy died aged only 17 at Handel’s then home near Pucklechurch and Jesse’s wife Sarah died in Thornbury only two days later.

The 1851 census shows Jesse as a master carpenter employing one man.  He was aged 51 and living in the little cottage in the High Street with his wife, Sarah aged 47.  The 1861 census shows Jesse now a widower and a retired carpenter and builder aged 61 still living in the same place.  He had a boarder, Ann Morley who was a widowed housekeeper aged 24 and born in Sodbury.  In 1871 census Jesse was still there, now with Esther Saise as his housekeeper.  She was described as his niece, and housekeeper aged 30 and born in Thornbury.  The two of them were still living there in the 1881 census.

Jesse died on 20th May 1887.  In his will dated 10th March 1886, Jesse Cossham, then described as a gentleman of Thornbury, appointed his son Handel Cossham as trustee together with Charles Olds a bootmaker and William Henry Brown a solicitor of Grovesend.  All his property was to go into trust.  The Deacons of the Independent Chapel were to receive £150 to be used for the expenses of the chapel (but not the stipend of the minister).  He gave his housekeeper, Esther Saise, £200.  The sum of £100 each was to go to his niece Elizabeth Thomas and his nephews Edward Richard Woodham and Samuel Woodham.  He gave nineteen guineas each to Rev John Charles Gayler, Walter Bayis, Ann Baylis and the Baylis’s two children Howard Walter Baylis and Mary Baylis.  He gave his son Handel any of his household furniture, books, musical instruments and other possessions that he might choose.  The remainder of his belongings was to go to Esther Saise.  Neither Handel nor Esther Saise was to auction any of these personal items.

Jesse left to Esther his freehold messuage garden and premises in Upper Bath Road that he bought from Thomas Dorney that was now in the occupation of William Underhill.  This property became known as 10 Upper Bath Road.  He also left her the two freehold cottages in Bullseye Lane or Lower Bath Road and which were occupied by James Moxham and Sarah Vizard.  These two house later became 7 and 9 Bath Road.  All the rest of his property and assets he left to Handel.  If Esther was still in his employ at the time of his death she was to be allowed to remain in the house where he, Jesse, had lived for many years which became known as Miss Saise’s Cottage in the High Street.  He also said that Walter Baylis should be allowed to buy the copyhold messuage now in the occupation of Thomas Morgan for £100.  This later became 2 Chapel Street.