We have been in contact with Peter Crew, a descendent of Samuel Crew and he has been kind enough to share his information on the family of Samuel Crew who for a time ran the Black Lion in Castle Street in Thornbury.

Samuel was born in the area known as Potters Wood, Bitton, Gloucestershire.  The second son of William and Eliza Crew, he was christened on the 22 June 1834 at Holy Trinity, Kingswood, Gloucestershire.  In the 1841 Census he was seven years old and living with his parents at Potters Wood.  William, his father, then aged about 30 was a coal miner.  Samuel had a brother Sampson aged nine, a sister Jane aged four and a little brother George aged two.  The Crew family seemed to have a very difficult time and some of the children died very young as a consequence.  George Crew was buried on 9th January 1842 aged only two years.  Jane Crew was buried on 20th February 1844 aged seven years and was buried in Kingswood.

In the 1851 Census, still living at Potters Wood in Bitton, Samuel’s occupation at 17 is stated as a carpenter’s apprentice.  William aged 44 had by this time become a grocer.  Samuel’s elder brother Sampson had gone into the grocery business with his parents.  Samuel had four younger siblings; William aged seven, Eliza aged five, Ann Eleanor aged three and a baby boy called Hiram aged 11 months.

In the March quarter of 1860 Samuel married Elizabeth Fowles in Bristol.  Elizabeth was born about 1824 in Whitchurch, Somerset.  We believe that Elizabeth was the daughter of a smith called Joseph Fowles and his wife Hester.

The 1861 Census shows that Samuel and Elizabeth came to live in St John Street in Thornbury, where he was a carpenter.  This may be the house that is now 10 Pullins Green but at this stage we are uncertain.  We assume that they moved there straight after their marriage but we do not have any record of when they moved in or whether Samuel’s parents moved away from Bitton before Samuel’s marriage.  The 1861 Census shows that Samuel’s father, William now aged 54, had moved to Bibstone near Cromhall with his family and was a lime burner and grocer.  The younger children all seem to have survived and were living with William and Eliza.

The 1862 Rate Book is the first indication that Samuel had a change of occupation and had become a publican as he was then shown to be living in the Black Lion in Castle Street, premises which were owned by Harris Collings.

Harris Collings had bought the “Lion House” from Charles Prewett on 17th September 1862, but he does not seem to have moved in immediately with his family to taken up the role of publican.  Instead he seems to have had Samuel Crew as a manager or tenant. 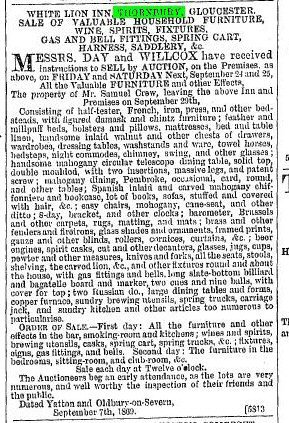 We have a copy of a sale notice of the furniture and effects when he left that pub on 29th September 1869.  We have an image of the sale notice on the right.

We assume that Samuel and Elizabeth moved to London from the White Lion as the 1871 Census shows that they were at the Albion Beer House in Peckham, Camberwell. Samuel was then aged 37 and Elizabeth 47.

Samuel’s family seemed to have stayed in the Cromhall area.  His brother William was a labourer living in Bibstone with his wife Mary and young family in the 1871 Census.  Samuel’s father was a lime burner and the Census shows that he was doing well as he employed three labourers and one boy.  He also seemed to have a much younger wife Ann aged 32 and more children; Henry aged 7 Stephen aged 5 Walter aged 4 Edgar 2 and Ada one month.

In January 1873 Samuel’s father, William Crew who was living in Cromhall bought The Swan Hotel on the High Street in Thornbury as a residence for his Samuel for £1450.  William’s other son William junior also seems to have had a change of situation as he became a beer retailer on Cromhall Common.  We know this from the Trade Directories in which he appears from at least 1876.  It is possible that the upturn in the fortunes of the Crew family was related to the coming of the railway line from Yate to Thornbury which brought labourers to the area around 1869 who required lodging, food and beer.  The railway itself was opened in September 1872 and this brought a good transport system to the area, especially to the quarrying industries.

On 24th July 1875 Samuel Crew, hotel proprietor of Thornbury bought 6 St Mary Street for £100.  At the time of the sale the house was void.  The Rate Books of 1876 and 1880 confirm that Samuel owned the property.  On 3rd December 1883 Samuel conveyed the property to John Powell of Thornbury, mason for £103.

In January 1877 Samuel Crew signed a petition about the quality of the water available in Thornbury.  The water at The Swan had been tested by the Public Health Laboratory and was was found to contain clay.  At this time Thornbury was being supplied by water from the tank at the railway station and the supply was very unsatisfactory.   Click here to read about water from the railway.

A newspaper report of 8th December 1877 shows that Samuel and his wife were experiencing domestic problems.  The report said that the police were called to the Swan Inn on the 23rd November 1877 because Samuel seemed about to murder his wife.  The policeman and Samuel ended up scuffling, although Elizabeth Crew apparently told the policeman to take no notice because “he’s always like that when he is drunk.”  In court Elizabeth was adamant that she was not being assaulted and that no one had called the police.  Mr and Mrs Crew seemed to be accusing the police of the assault. The magistrates found in favour of the police and Samuel was fined £5 and costs.

Samuel’s wife, Elizabeth died in 1879 aged 55 and was buried on 7th of October in Thornbury.

Samuel married Caroline Fowles in 1881 in Bath.  Caroline was from Whitchurch in Somerset and she was 15 years younger than Samuel.  Caroline Fowles was probably a niece of Samuel’s late wife, Elizabeth and the daughter of William and Ann Fowles.

A newspaper report of March 2nd 1880 suggests that Miss Fowles may have been helping in the pub before her marriage.  The report says that Samuel was again in trouble for being drunk and assaulting the police.  Miss Vowles (as she was called in the newspaper) was described as a housekeeper at the Swan.  She came to the police station in the middle of the night only partially dressed and asked for protection against Samuel.  It seems that she had shared the bedroom of Ellen Derrick (the servant at the inn) because she was frightened of Samuel.  Samuel had come to the bedroom and ordered Ellen out.  The women had tried to lock the door against him but he kicked in a panel of the door and unlocked it.  Miss Vowles had then fled down the stairs to fetch the police while Ellen locked herself in her own room.

The policeman went to fetch some clothes for her and encountered Samuel Crew.  Samuel opened the door clutching a large stick and was not helpful to the policeman who managed to find a blanket and some shoes for the poor woman.  The affair ended with Samuel violently assaulting the police constable.  This time Samuel was fined £10 with 6s and 6d costs.

Samuel’s father William died in the June quarter of 1880 and his death was registered in Chipping Sodbury.  As William was said to have bought the Swan Inn it is possible that Samuel’s move from the Swan about this time was connected with his father’s death.  However we have not yet had sight of the deeds so this must only be speculation.  The 1881 Census confirms Samuel had moved from the Swan and become a ‘dealer in beer’ further up the High Street.  In this Census Samuel was aged 46 and his wife Caroline was only 29.  We believe they were living at 43 High Street which today is occupied by Boots the Chemist.   The notice of the sale of the shop appeared in the newspaper of 3rd May 1883.  Here the shop described was obviously a very substantial premises and dwelling house “lately in the occupation of Samuel Crew.”  It was very large with two shop fronts each with a separate entrance.  The 1881 Census indicates that Samuel shared this property with Mrs Ellis who was an agent for Gilbey’s wine and spirits company.

On 13th December 1881 Samuel and Caroline’s son, Albert Edward Crew was born in Thornbury.  We have no record of him attending either the Council School or St Mary’s School.  However he seems to have applied for a scholarship at Thornbury Grammar School and failed.

Samuel’s second child Henry James Crew was born in 1883 and his birth was registered in the June Quarter in Thornbury.

On the 24th March 1884 there was a sale of the household furniture, horses carts and other effects of Samuel Crew who had “declined the beer agency” and was said to be leaving the neighbourhood.

We do not know what happened to Samuel Crew as he does not seem to appear in any other records and Peter Crew who has researched the family feels that Samuel probably emigrated to America.

Samuel’s surviving son, Albert Edward Crew appears in the Census of 1901 where he was a woollen draper’s clerk lodging in Hammersmith.  He married in 1904.