We are greatly indebted to Rosemary King, a local history enthusiast living in Alveston, for much of the information about we have about Thomas and George Danvers Crossman.

Thomas Crossman – was baptised 20th November 1796 and was the son of George and Hester Crossman.  He married Ann Florence Ward on 18th October 1825 in Olveston.  Ann was the daughter of Danvers Ward, a surgeon of Tockington and Bristol.

In 1821 Thomas went into partnership with another local solicitor, Edmund Lloyd.  We can’t be sure where they had their first office, but we do know that by 1830 they were in business at 12 The Plain so it might have been there from the start.  At first they were renting the property from Susannah Martin, but they acquired it later, at least by 1876 and probably a lot earlier that that.  The two families of Crossman and Lloyd were in partnership for a long time (until about 1890), Thomas Crossman being succeeded by his son, George Danvers and Edmund Lloyd being succeeded by his son, Henry Hume.  As well as having the office on The Plain, they also had an office in John Street in Bristol.

The 1840 Tithe Survey shows that Thomas Crossman owned other property in Thornbury which included what is now 11 and 13 Pullins Green and three houses on the site of what are now 3 & 4 The Plain.

The 1841 census shows us that Thomas Crossman actually lived in Lower Hazel in the Olveston area.  He was a solicitor and his wife was Ann Florence Crossman who apparently had independent means.  They had five daughters living with them; Hester Jane (baptised 19th August 1831), Lucy Mary (baptised 5th March 1834), Florence (baptised 7th August 1835), Annie then aged three and Isabella then aged one.  They also had three female servants living in the household; Mary and Ann Jones and Elizabeth Leonard.

It would seem that just before the census Thomas and Ann had lost one daughter. Anna Florence Crossman who was baptised 9th May 1828 was buried on 23rd February 1841 at Olveston.  Anna Florence’s parish at the time of her death was given as Hazel and her age was only 13.  Thomas and Ann also had three sons who were not at home at the time of the census; Edward (baptised 30th September 1834), Charles Danvers Crossman (baptised 28th August 1837) and George Danvers Crossman who was baptised in Cowbridge 9th July 1830.

The Trade Directory for 1842 shows that Thomas Crossman was an Attorney and “Commissioner for taking oaths by married women” in Thornbury.  Thomas and Ann appear to have lived in Hazel until they bought the site of old Friezewood House and its estate in Alveston in 1844.  Between this time and the next census in 1851 they built a new house on the site.  We know that they had not actually moved to Alveston before August 1844 because when their daughter Annie aged only 5 died the parish that she died in was described as “Hazel”.

The 1861 census shows that Thomas Crossman, then aged 64, continued to live at Friezewood.  This census says that he was living with his remaining daughters but that his wife was not present at the time of the census.  We have not been able to trace Thomas in the 1871 Census.

The firm of Crossmans still exists in Thornbury and there is a sign there that says Thomas worked there from 1821 to 1870.  Ann Florence died in the March quarter of 1871 aged 73 years.  Thomas died on 5th June 1873.  His will dated 16th November 1869 left the greater part of his estate in trust to his son George Danvers Crossman and his heirs.

George Danvers Crossman – the 1881 census shows that George was born in Cowbridge in Wales.  We are not sure of his birth date.  The parish records for Olveston show he was given two baptisms, a private baptism on 31st August 1829 at an unidentified location and another baptism at Olveston on 9th July 1830.  George was the son of Thomas and Ann.  He was named after his maternal grandfather, Danvers Ward.  The 1841 census shows him at school in Walcot, Bath.

By 1850 George was a law student living for part of the year in London.  The Gloucester Record Office has his diary which describes his life in London at this time.  This was quoted in the bulletin of the Society of Thornbury Folk, a historical society no longer in existence.  Apparently he ‘left home by the coach at 3, and arrived at London at 10’.  He kept careful account of his expenses in London.  Lodgings ‘at 10s per week including everything but coal and candles.’  His total expenditure for the six months was £101 8s 1d.  His journey to London cost £1 9s and a ‘packet of tobacco’ 9d.  His visits to the theatre 2s, but on one occasion 3s.  He bought 6lbs of tea at 4s/lb in February which seems to have lasted him till June.  He was extravagant enough to purchase a walking stick for 6/6d.  His week’s expenses averaged about £2.

The 1851 census mistakenly shows his name as George Danvers, omitting the surname.  In this census he was lodging in Bloomsbury, London with John Fisher an attorney from Cirencester.  We do not know if this was an attorney he was training with but we do know from his diary a little about his work in London at this time.  His office was in Lincoln’s Inn Fields and his work seems less than demanding.  He writes; “To office, nothing to do there as usual’ and later “To office, Grimes gave me some work to do”.

The board hanging in the reception of the ‘Crossmans’ solicitors at 12 The Plain indicates that George joined the business there in 1851 and continued until his death in 1890. 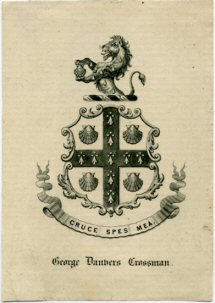 On 30th August 1859 George married Sophia Caroline Hinde in Lancaster.  The 1861 census shows them visiting the home of a merchant, Robert Gladstone in Salford.  Sadly Sophia died on 4th November 1870 aged only 37 and her death was registered in Upton on Severn.  In 1876 George Danvers Crossman appears in the Rate Books with property in Castle Street, The Plain and John Street.

The 1877 Trade Directory shows George had an office in Castle Street, Thornbury (which we assume to refer to the office at 12 The Plain).  He was, amongst other things, a Commissioner for taking Oaths in Common Law and Chancery and for taking Acknowledgements for Deeds by Married Women and a Clerk to the Commissioners of Sewers.  The 1881 census shows he was living in the family home at Friezewood, Olveston with his sister Lucy, aged 47, and three servants.  He died at Friezewood 5th August 1890 aged 60.

We are grateful to Anthony Pincott of The Bookplate Society for sending us the image of George Danvers’ arms shown on the right above.