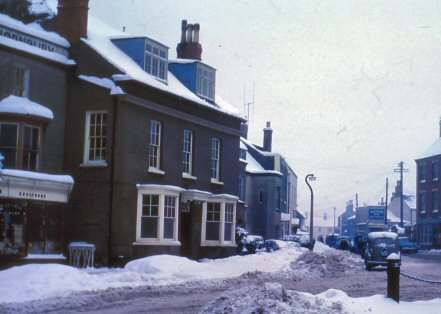 There is a fine timber board hung in the reception of Crossmans at 12 The Plain which lists the various partners in the business since its inception and the years in which each solicitor worked for the firm.  The first entries in the list are that of Edmund Lloyd 1819 and Thomas Crossman 1821.  We cannot be sure that the two of them started at 12 The Plain on these dates, or whether their office was somewhere else.  We know from a rent roll of 1830 that the name of Crossman & Lloyd are shown as occupying the property then.

The 1840 Tithe Survey which is supported by its own map showing individual houses shows that the property we now know as 12 The Plain was then Plot 260, a house, office and garden owned by Susannah Martin and occupied by Thomas Crossman and Edmund Lloyd.  The two families of Crossman and Lloyd were in partnership for a long time (until about 1890), Thomas Crossman being succeeded by his son, George Danvers and Edmund Lloyd being succeeded by his son, Henry Hume.  As well as having the office on The Plain, they also had an office in John Street in Bristol.

It is amazing to see that the property has been a solicitors office ever since that time and the name of business, still includes the name of the Crossman family, although no member of that family have been involved in the business since 1890.

The board shows the following partners:

Charles (shown in the photo on the left) was born in Ogbourne St Andrews, Wiltshire, the son of Davis Canning which is how William got his middle name.  Charles was a draper’s assistant at home in the 1851 census, but shortly after he emigrated to New Zealand arriving in Wellington in December 1851 on the ‘Cornwall’.  In 1852 he was a farmer at Waipukurau.  His wife, Catherine was born in Ireland.  They had at least one daughter, Elizabeth, who was born in New Zealand about 1867.  Charles’ brother, Captain Davis Canning was killed in an engagement with Maori rebels in Ruaki Ture, Poverty Bay, New Zealand.  He had been leading a guard of Napier Volunteers tracking three prisoners who had escaped Chatham Islands when his party was ambushed and Davis and four others were shot by the rebels and six others were wounded.  Shortly after this Charles seemed to moved back to visit England for a short time where William was born in 1869.  However they returned to New Zealand.  There is a reference on the Internet to a ploughing match held in 1876 at Charles’ Rostrevor property near the Richmond railway station.

In 1891 census William was a solicitor’s articled clerk living with his parents in Vyvyan Terrace, Clifton.  In 1895 William joined the Crossman, Lloyd and Gwynn firm of solicitors in Thornbury.  He seemed to settle in Thornbury around this time as he was playing cricket for the Thornbury Castle team.  On 15th September 1896 William married Clara Louise Bain at St Martin in the Field in London.  Clara was the second daughter of Donald Bain of Keynsham.  At the end of the 1895 cricketing season William was elected Hon. Treasurer of the Thornbury Castle Cricket Club in recognition of the valuable services he had rendered.

A report in the Bristol Mercury of April 1898 shows that William Davis Canning was elected to the Parish Council.  William was elected Mayor of Thornbury and served in that capacity until 1914.  He was also Steward for the Manor of Thornbury.  William and Clara had three children: Doris Violet born on 31st October 1897, Cicely Clare born on 18th September 1898 and Charles Desmond baptised on 18th September 1900.  The Canning family lived at The Villa, a large house on the Bristol Road, just outside of the town.  It is interesting to note that by the 1911 census he had changed the name of his house from ‘The Villa’ to ‘The Cedars‘.

On 11th August 1914 William was bathing at Dollar Cove, Gunwall in Cornwall when he was drowned.  The body hadn’t been found by the time that a memorial service was held in Thornbury.  It appears that Clara moved away from The Cedars as William’s business partner took over the house.  Clara was living in The Orchard, Hazelmere, Surrey by August 4th 1916 when Doris Violet became engaged to Arthur B Clough.  They married in Bristol in 1919.  When Cicely Clare engaged to William Waddon Martyn of Ratnapura, Ceylon in 1927, her mother was living at Derry Gariff, Camberley. Thomas Norman Arkell  1901 – 1913 – Thomas was born in Boxted in Essex in March 1864.  He was the son of Reverend John Arkell and his wife, Sarah Elizabeth (nee Norman).  In the 1871 census he was the Rector of Portishead and in 1881 he was Rector of St Ebbes in Oxford.  The 1891 census shows the family still in St Ebbes and Thomas had become a solicitor.  Thomas graduated with a MA at Corpus Christi College, Oxford in 1886.  On 1st July 1891 Thomas married Edith Martha Gwynn in Barton Regis area of Bristol.  Thomas’s father officiated at the ceremony.  Edith was the daughter of John Crowther Gwynn of Thornbury.  The 1901 census shows that Thomas and Edith were living at Haw Lane in Olveston.  By this time they had three children: Edward Norman G. born in Oxford on 10th January 1893, Athelston John C born in Oxford on 9th December 1893 and Edith Marjorie S born in the Barton Regis area in 1895.  Thomas was a cricketer.  In 1898 he played for Glamorgan in the Minor Counties Championship.

Thomas’s connection to the Gwynn family must have helped him join the business at Thornbury in 1901.  Around this time he moved the family to live at ‘Cross Posts’ in Morton.  The two sons were admitted to the Thornbury Grammar School in 1902.  They lived at Morton at least until  1913 when Thomas left the firm.  We don’t know where they went.  Edith died in Bournemouth in 1946 aged 81.  Thomas died in West Parley near Blandford in Dorset on 6th March 1951 aged 87.

John Gammon Wicks  1914 to 1939 – John was born in Oxford in December quarter 1882.  He was the son of James Wicks, a wine merchant and his wife, Blanche Isobel (nee Cole).  The 1901 census shows John was boarding at a private tutor in Milford in Hampshire.  In March quarter 1912 John married Louisa Maria Knight Richards, the daughter of Thomas Fitzwilliam and Sarah Louisa Richards of Redruth.  They had one child, Ursula Mary born on 12th October 1912 at Upton on Severn before the family moved to Thornbury and two more after they moved here: Philip Charles Livesey born in 1916 and Cynthia H born in 1920.

We are not sure when the family moved to Thornbury.  The records of Thornbury Cricket Club shown below indicate that he moved to Thornbury in 1909.  He was there in August 1914 when he is mentioned as being a partner of William Davis Canning who had drowned in Cornwall and by 1916 he was known to be living at The Cedars on the Bristol Road, which had been the previous home of Canning family.  The South Gloucestershire Chronicle of August 11th 1916 reported the birth of son (presumably Philip) to Mr and Mrs Wicks “of the Cedars.”

The London Gazette of 15th August 1917 had an announcement that John Gammon Wicks had been appointed temporary Lieutenant in the 1st Battalion Gloucestershire Volunteer Regiment.  Thornbury Museum has a photograph of some members of this battalion taken on 6th April 1918 when the battalion won the Assistant Adjutant’s Cup, which included John Gammon Gammon Wicks (shown here on the right).  The Volunteer Regiments at the time of the First World War performed a similar function to the Home Guard in World War II.

John was very busy man in the local community.  As well as being a solicitor and commissioner for oaths, he was also Clerk to the Guardians and Assessment Committee, Superintendent Registrar of Thornbury Union, Clerk to the Thornbury Rural District Council and local school authority and Gloucestershire Drainage Commission, Joint Clerk to Thornbury Grammar School, Clerk to the Commissioner of Sewers, South Gloucestershire Internal Drainage Board, Thornbury Pension Sub committee, District Insurance Committee and Clerk to the Justices and Registrar and High Bailiff to County Court.  He was clerk to Thornbury Rural District Council for 21 years until October 1939 when he resigned due to ill health.  He was also Mayor of Thornbury from 1942 to 1944.

The records of the Thornbury Cricket Club show that John was very active in the cricket club and much appreciated by them.  The following thumbnail sketch was written about him by Edgar Mervyn Grace and we are grateful to Les Summerfield, the Cricket Club and Mike Grace for allowing us to use these notes:

J. G. Wicks came to Thornbury as a solicitor with Crossman, Lloyd, and Gwynn in 1909 and played for the Castle Club.  After the World War I he continued to play for the amalgamated T. C. C., keeping wicket very well and being a great help to the Club as Treasurer from 1931 to 1937 when he raised the number of subscribers past the 200 mark.  In 1931 he presented the Club with a flag, which Mrs Wicks unfurled during the game with the Optimists, for which Jack Hodges made the flag-staff.

During the Second World War, they lost their son, Philip who was serving as a Sergeant Observer Navigator in the 77th Squadron of the RAF Voluntary Reserve.  He died on 3rd April 1941 aged 24.  His obituary in the Gazette said that before the War Philip had almost a passion for machinery and was always seeking ways to improve the performance of the engine of his motor car.  When the war started he immediately volunteered for service where his mechanical knowledge and keenness would stand him in good stead.

Charles Paul Taylor 1915 – 1953 Charles worked for Crossmans & Co from 1915 to 1953.  We don’t know much about Charles.  The 1921 and 1927 electoral registers show Charles was living at Berkeley House in Stone whilst his office was at 12 The Plain.  Charles’s wife was Frida Margaret Graves Law, the daughter of Thomas Graves Law and his wife Wilhelmina Frederica Allen.  They married on 11th April 1908.  The 1931 and 1935 electoral registers show Charles and Frida were living at The Chantry in Castle Street.  In 1931 Charles Wilfred Taylor, presumably their son, was living with them.  By 1938 Charles and Frida had moved to The Hatch, further down Castle Street and they were listed as living here in 1946 and 1950 registers.

Trade directories show Charles as a solicitor, commissioner for oaths, deputy registrar for Thornbury Union, clerk to the magistrates, clerk to governors of Thornbury Grammar School.  Charles Paul Taylor died in 1952 and his wife, Frida, died in 1953.