Luke Cullimore was born on 29th October 1845, the son of James and Hester Cullimore who were beerhouse keepers at The Crispin, just off Pullins Green.  By the time of the 1861 census Luke who was living with his parents had become a cooper’s apprentice.  In 1865 Luke Cullimore married Amy Lucy Gregory from Stapleton in Bristol. She was born about 1840.

The baptism records of Mabel, Amy and Bessie show Luke as a cooper.  The baptism records of Wallace in 1874 and Kate in 1876 show him as a licensed victualler or publican.  The 1871 Census shows the Plough Inn was occupied by Luke Cullimore, a publican aged 25, his wife, Amy Lucy aged 31 from Stapleton, and their children: Arthur D aged five born in Long Ashton, Mabel E aged two born in Downend and Amy M B aged eight months born in Thornbury, plus a servant Elizabeth Pymm aged 14 from Thornbury and a lodger James Stephens, a mason aged 21 from Devon.

The 1876 Rate Book show Luke remained at The Plough until at least that date.  It appears that soon after this time he changed occupation and his home.  The baptism record of Hector in 1878 show Luke as a dealer and the 1880 Rate Book shows he had moved to 51 High Street.  The 1881 census shows Luke had become a pig dealer and flour merchant.  By 1885 he had become the owner of 45 High Street and was living there.  He didn’t stay here long and by 1890 he had sold the property to Thomas Exell and moved to live in 56 High Street.  The 1891 census Luke had become a farmer living at 56 High Street.  The 1901 census shows him as a farmer and dealer now living in Sibland with two of their children: Kate and Dora.

When Luke’s mother, Hester, died in 1899, he inherited three properties in St John Street (numbers 11, 13 and 15) which had previously been owned by Luke Withers.  The photo on the right, we believe, shows Luke and Amy at the wedding of their daughter, Dora in in 1906.

Luke died on 28th April 1917 aged 71.  His obituary in the Gazette mentions that Luke was “probably one of the most known figures in agriculture and at the principal markets in the county”.  Luke specialised in pigs.  He had had no illness in previous 40 years, but he died of pneumonia which developed from a heavy cold thought to have been caused by his attending a market on a very cold day.

In his last will dated written in 1901 he had given his property in trust for the benefit and use of his wife, Amy Lucy Cullimore, and after her death it should be sold by his trustees.  The Trustees were Arthur Daniel Cullimore of 179 Westbourne Grove Bayswater London butcher and Wallace James Cullimore of Exton House, Second Avenue, Hove, Sussex, retired officer of the Merchant Service.  Amy Lucy died 21st December 1925 aged 86.

Of Luke and Amy’s children:

Arthur Daniel married Ellen Eliza Allen on 24th October 1893.  Ellen was the daughter of Robert Allen , a farmer from Kington.  At the time of the marriage Arthur was a butcher living in Bayswater.  He died in 1946 aged 80. the burial register shows he died at 179 Westborne Grove, London W.11.  His body was brought back to Thornbury for burial in the Cemetery on 27th March 1946.

Amy Maud Blanche married Alfred Edward Nicholls on 23rd December 1891.  Alfred was the son of Samuel Nicholls, a blacksmith.  At the time of the marriage, Alfred was a mariner whose home was in Kings Lynn. Bessie Gregory married Walter Fear on 23rd January 1900.  Walter was a farmer and the son of  a farmer from Morton, Jared Fear, and his wife Janet (nee Ford).  They had at least two children: George who died 8th December 1914 aged 10 and Leslie Walter died 28th may 1973 aged 70.  Walter died 23rd December 1907 aged 36.  Bessie re-married to Edward James Lashford – she died on 22nd January 1951 aged 78.  They were all buried in the churchyard at St Oswold Church, Rockhampton.

Wallace James – born on 27th March 1874.  He joined the Royal Navy; unfortunately the records only show his rank as Sub. Lieutenant and provide no other information. 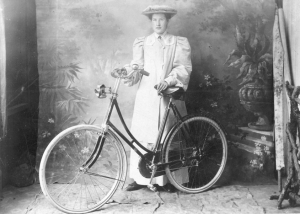 He married in Croyden area in September quarter 1903.  At the time of his father’s death in 1916 Wallace was living in Hove.

Hector James – married in the Gloucester area in March quarter 1902.

Dora Beatrice married Thomas Ball in Thornbury on 31st July 1906.  Thomas and Dora had 4 children before she became a victim of the influenza pandemic and died in 1918 aged 34.  She was buried in Thornbury Cemetery on 13th December 1918.  We have the following two photos of Dora, one a studio portrait (right), the other a photograph of her wedding group showing Dora with her parents and other (as yet unnamed) members of her family – see above.