The 1861 Census shows William was working as a carpenter’s apprentice.  In 1868, William inherited a share in the ownership of The Crispin from Luke Withers.  In his will, Luke bequeathed the property to William and his brother, Luke, on the condition that their parents could continue to live in the house until their deaths or, in event of James dying first, that Hester could continue to live there until she died or re-married.

William’s father, James Cullimore, died in 1869 aged 54 years.  The 1871 Census shows that his mother, Hester, continued to run the beer house, now referred to as ‘The Jolly Crispin’.  William had married Eliza Main in Bristol in 1864.  Eliza had been born in Stanton Wick, Somerset.  By 1871 William had become a carpenter, but he was also running a public house in Gillingstool known as ‘The Black Horse’.  At this time William and Eliza had three children: Florence Mary aged 6, James aged 3, and Julia Gertrude aged 2.  The family must have been living for some time in Stanton Wick as Florence Mary had been born there.

The 1881 Census shows that William and Eliza had moved back to live with his mother, Hester, at The Crispin.  There were now six children: James aged 13, Julia Gertrude aged 11, Ada Blanche aged 9, Laura May aged 7, Smart aged 3 and Austin Shepherd Cullimore aged 2 months.  William was still a carpenter.

William’s wife, Eliza, died in 1884 aged 41 years.  In 1891, Hester aged 70, was still running the pub but she now had the four youngest of William’s children living with her.  Ada was a dressmaker and Laura a shopkeeper.  William was living in 36 Bath Buildings, Bristol.  He was said to be a widower, a carpenter aged 48.  He was boarding with Arthur Carwardine, a butcher.  Shortly after the census, in June quarter 1891, William married Frances Carwardine, Arthur’s sister, who was also in the house at the time of the census.  At that time Frances was shown as a single woman ‘living on her own means’.

Hester died in 1899.  We are not sure when the property stopped being run as a beer house.  The 1901 Census shows the house was occupied by William a retired carpenter aged 58, Frances his new wife also aged 58 born in Mardon, Herefordshire and his son, Austin who was a tailor.  The 1904 trade directory however includes the name of William Cullimore as publican of The Crispin in Mutton Lane.

By 1905 Austin Cullimore was living in what late became Wellbourne Cottage in Castle Street which was owned by his father William.

We have a copy of a deed dated 1909 which showed that William also owned number 4 Crispin Lane (then referred to as Mutton Lane) and he sold this property to his wife, Frances for the sum of £150.  The Rate Books indicate that William acquired this property before 1876, presumably following the death of the previous owner, Benjamin English in 1868.

The 1911 Census shows that William and Frances had been married for 20 years but had had no children.  Both were aged 68 by this time. William was a retired carpenter. 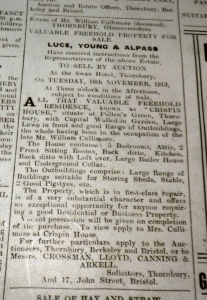 William died in September 1913 aged 71 years.  It was reported in the Gazette that William had been out for an early morning walk and had returned home at 6.30 am when he sat down in the kitchen and died.  In his will dated 1911 he made his son, Smart and his son-in-law, Albert Jacob Gore, the husband of Florence Mary, his executors and trustees.  As the image on the left shows The Crispin was put up for sale at auction on 18th November 1913.  It was clearly referred to as a house at that time.

Frances died aged 74.  She was buried in Thornbury Cemetery on 10th September 1917.  Thus, in 1919, it was left to Albert Jacob Gore to settle William’s estate.  An arrangement was made with Laura, William’s sister, now married to Samuel Young Sainsbury, a guard on the railway and son of John Sainsbury, farmer, to reduce her annuity and enable the property of William’s to be sold.  Albert Gore was a pork butcher and it is interesting to see that he sold the property to John Taylor, another butcher.

The house was put up for auction on 11th July 1917 when it was described as: “a freehold residence with capital walled-in garden, large lawn in front and good range of outbuildings in the occupation of Mr Mogford at the rent of £17 per annum.  The house contains five bedrooms, attic, two front sitting rooms, back sitting room, kitchen, back kitchen with loft over, large boiler house and underground cellar.  The outbuildings comprise large range of buildings suitable as storing sheds, stable, two good pigsties etc.”  At this time William’s son Austin Cullimore seems to have moved away from Thornbury with his family.

There is a reference in a Thornbury street directory of 1925 showing that E.W. Ball was occupying Crispin House.  When John Taylor sold the property in 1926, the previous occupant was said to be Frank Taylor, presumably a relative of John’s. 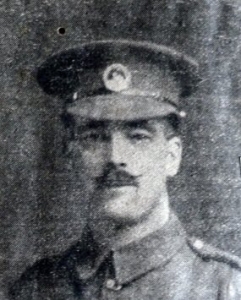 Smart Cullimore.  We know quite a lot about Smart Cullimore, the son of William and Eliza, thanks to the fact that his achievements frequently appeared in the newspapers.

He was born on 3rd April 1878.  Smart was entered for Thornbury Grammar School’s entrance examination  on 9th January 1890, but he failed to gain a scholarship.

He left Thornbury to become a police officer in Newport, Monmouthshire, where he worked for 16 years.  He was frequently seen by the public acting as mounted officer on ceremonial duties.

In 1906 he married Ada Horton in Monmouthshire.  She was the daughter of Charles Horton.  The 1911 census shows that after five years of marriage they had not had any children.  Ada was shown in the census at Canal Parade in Newport whilst Smart was listed amongst the policemen of the area, possibly indicating he was on duty.

The website of the Royal Humane Society reports that Police Constable Smart Cullimore was one of three  police officers involved in the rescue of a Mr W Miller from the river Usk in Newport.  Apparently P.Cs Thomas Hurn and James Lawrence had attempted to save the life of Mr Miller but it was Smart Cullimore who was successful in doing so.  In July 1911 he was awarded the Royal Humane Society’s Bronze Medal for jumping into the river in full uniform to save the man’s life.

Sadly Smart’s wife Ada died in 1914 and her death was recorded in the Newport area in the June quarter of 1914.  She was aged only 33.

While he was in the police force Smart Cullimore was involved in one of Britain’s earliest successful actions in World War I.  This was a strange incident that led to the capture of the German liner the S.S. Belgia.  Apparently the Belgia was sailing back from Boston to its home port of Hamburg and was short of coal.  Early in August 1914 the Belgia’s captain had attempted to contact the German Consul in Newport to get permission to come into the port to re-coal.  The British Admiralty refused permission and S.S. Belgia was moored in the Bristol Channel some ten miles from Newport.  Before dawn on 4th August 1914 the Harbour Master, the Chief Constable and 12 policemen including Smart Cullimore, all armed with borrowed rifles sailed out and took possession of the ship, its crew, passengers and cargo. The ship was carrying 73 reservists bound for the German Army.  Its cargo was an interesting one and apparently included  £250,000 worth of food and assorted animals destined for Hamburg Zoo.  The ship was seized and became a British Merchant ship, Hunstrick.  ‘This is Newport‘  local history website tells us that the German sailors and reservists were arrested as enemy aliens, probably becoming the first prisoners of that war.   The website goes on to say that the cargo was auctioned at the Waterloo Hotel and the animals, including alligators, raccoons, fighting bull-frogs, rattle snakes, chameleons and a number of exotic birds were acquired by an enterprising person from Abergavenny and put on show in the town.

Newport Past website had a report of this incident and the creators of the website very generously allowed us to use one of their photograph shown below.   It shows the triumphant police officers, including Smart Cullimore.

Smart was acting as assistant drill in the Police when the call came for instructors to join the Army.  Sadly Smart’s wife Ada had died in Newport in 1914 and so his war record shows his next of kin as his brother A.S Cullimore of Two Mile Hill Kingswood.

Smart enlisted in the 1st Monmouthshire Regiment and 4th Welsh Brigade, R.F.A. and became a sergeant.  In February 1915 Smart was promoted to Lieutenant in 11th Battalion South Wales Borders (2nd Gwent) and became a Captain by October the same year.  In November 1915 the Gazette published a report showing that Smart had written to the Newport Watch Committee asking that they stop paying him the 8 shillings each week to which he was entitled..

He was killed on 20th February 1916 and was buried in Le Tueret Cemetery, Richebourg – L’Aoue in France.  Apparently he had been visiting some advanced and very exposed posts held by his Company when he was hit by a rifle bullet which entered his left lung.  He was said to have remarked “They have got me this time” and never recovered.

Florence Mary Cullimore.  The birth of Florence Mary was registered in Clutton in Somerset in 1864.  By the Census of 1881 Florence was apprenticed to a draper and milliner Mary Ann Livings in Bradford on Avon.  In 1889 Florence married Albert Jacob Gore in the Axbridge area.  Albert was a pork butcher living in Two Mile Hill, Kingswood when he was named as one of the executors of Smart Cullimore’s will in 1915.

James Cullimore.  James was baptised on May 8th 1867 at St Mary’s church in Thornbury. In 1881 the Census showed that James was  living with his grandmother Hester.  James died aged 21 years and his burial was entered in the records of what is now the United Reformed Church on 18th April 1888.  His burial was also recorded in the parish records of St Mary’s church in Thornbury with the note that it was ‘certified under the Burials Act by William Cullimore.’  It appears that an Act of 1880 allowed for a burial service of a nonconformist person to be performed by a nonconformist minister in an Anglican church and for that burial within the boundary of an Anglican churchyard.  We assume therefore that he was actually buried in St Mary’s churchyard.

Julia Gertrude Cullimore.  Julia was baptised in Thornbury on November 5th 1871.  On 14th August 1901  she married Frederick Christopher Harvey in Thornbury.  At the time of their marriage Frederick was a policeman living in Paddington.

Ada Blanche Cullimore,  In 1891 the census showed Ada then aged 19 was living with her grandmother Hester.  Ada was married to Walter Mulley in Paddington in 1916.

Laura May Cullimore.  Laura was baptised in Thornbury on 26th April 1874.  In 1881 and 1891 Laura was living with her grandmother Hester at The Crispin.  By 1891 the Census describes her as a shop assistant.