In 1901 7 St John Street in Thornbury was occupied by Elizabeth Driscoll, a married charwoman aged 61 from ‘Tedbury’.  Living with her was her son from her first marriage, James Harris, who in previous censuses had been referred to by his first name ‘Alfred’.  He was a widower aged 30 working as a general labourer.  Also living with Elizabeth were her son from her second marriage, Frank Driscoll, another general labourer aged 17, and Dorothy Harris aged 6. Dorothy was described as a ‘niece’ but we believe she was Elizabeth’s grand-daughter and the daughter of James Harris (whose full name was Alfred James).  James’s wife, Julia (nee Vizard) had died in 10 June 1898 aged 26 years.

Elizabeth was born about 1839 in ‘Tedbury’, Gloucestershire, the daughter of William Rose.  In 1857, she married Jonah Harris and in 1861 they were living in Avening where Jonah was working as a coachman.  By 1871 they had moved to one of the two cottages on Gillingstool Hill which were later demolished to make way for the extension of the Council School.  Jonah was working as an ostler.  By this time they had George born about 1859, Ann born about 1862, John Edward born in 1866, Martha Jane born in 1868 and Alfred born in 1871.  Jonah died in 1874 aged 42 years.

The 1881 census shows Elizabeth was a widow, working as a charwoman living in 8 Horseshoe Lane with George, Annie, Martha, Alfred and two new children, Rose Elizabeth in 1873, and May born about 1878.

On 27th May 1882 Elizabeth married Francis George Driscoll at St Mary’s Church.  Francis was from Kilrush, County Clare in Ireland and he had moved to Thornbury after being a Private in the 5th Fusiliers.  His first wife was Jane with whom he was living in Castle Street in 1871 when Francis was described as a pensioner aged 43 years.  Jane died in 1881 aged 62 years.

In 1882 on June 30th Francis Driscoll signed a tenancy agreement to rent one of the properties of the Corporation of Thornbury at 15 St Mary Street for £6 a year.  At that time Francis was described as a labourer.  The 1885 rate book shows Francis (and presumably Elizabeth still living in the same house.

The 1890 rate book and the 1891 census show Francis and Elizabeth were living in a small three roomed cottage in Mutton Lane (which was either 6 Crispin Lane or one of the two adjoining houses).  The census describes Francis as a coachman, his birthplace is given curiously as Hammersmith, London.

The 1905 rate book shows Elizabeth Driscoll was the tenant of 7 St John Street.

Francis Driscoll died in 1909 aged 81.  He was buried in Thornbury Cemetery on 20th January 1909.  His address at that time was said to be John Street.  The Gazette of October 10th 1908 reported that Mr Driscoll then living in St John Street was now to be provided for by the Veterans’ Relief Fund.  He was said to be a veteran of the Indian Mutiny.

In 1910 when the house was valued for assessment of the rates, it was occupied by Elizabeth.

We think Elizabeth shared the house with her son, also Francis George Driscoll who was born in 1883 and baptised on 3 April 1887.  Frank Driscoll married on 18th November 1907 at which point his occupation was given as a groom.  His wife was May Sophia Dyer then aged 21.  She was born on 30th July 1890, the daughter of John Dyer, a labourer.  The 1911 census shows Elizabeth Driscoll aged 73 living in the house with Francis and May and their daughter, Violet aged 1.  The census record shows May was born in Old Down.  Elizabeth died in 1926 in Thornbury Workhouse Infirmary.  She was aged 86 and described as ‘Elizabeth R. Driscoll, widow of the late Francis Driscoll’.  She was buried in Thornbury Cemetery on 9th January 1926. 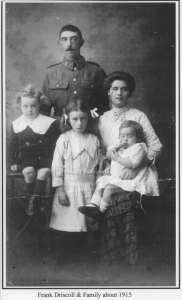 Frank and May are shown in the photo on the left with their three children in 1915.  Frank Driscoll was serving with 8th Battalion Gloucester Regiment.  Tragically he was killed on 18 November 1916 in France and his name appears on the Thiepval Memorial.

We know that May was expecting another child around the time of Francis’s death.  Their son, James, only survived 23 weeks before he died.  He was buried in Thornbury Cemetery on 2nd May 1917.  We only know the names of two of their other children: Violet May born on 5 April 1910 and Francis George born on 3 June 1912.  The children went to school at St Mary’s in Thornbury and were enrolled in 1922.  Their address at that time was St John Street and their parent or guardian was given as Fred Driscoll in one instance and Fred Vizzard in the other.  Fred Driscoll may have been an error as his name was actually Fred Vizard.  This is because their mother, May Sophia Driscoll (nee Dyer) married Frederick Vizard, a labourer, in December 1919.  Frederick was born on 3rd July 1887 and baptised on 2nd October 1887 at Alveston St Helen’s Church.  He was the son of Henry Rake Vizard, a stonemason and his wife, Mary Ann.  In the 1891 census the Vizards were living at Greenhill, Alveston.

May Sophia carried on living at 7 St John Street with Fred Vizard until about 1926 when they moved to Crossways.  They had at least four children of their own – Gwendoline was born on 25 September 1922, Gerald Frederick born 14 September 1926, Desmond Leslie born on 24 February 1930 and Sylvia Mary born on 27 August 1933.  The family had moved to 18 Market Site by 1938 when Sylvia started at the Council School.

The special register compiled in 1939 in preparation for the war shows Frederick Vizard was a quaryman and Frank Driscoll was a market gardener.  Frederick died aged 64 and was buried in Thornbury Cemetery on 8th December 1951.  His address at that time was 18 Market Site.

It is interesting to note that Francis (known locally as ‘Frank’) Driscoll, the son of May and her first husband, was the third generation to be given the name of Francis George Driscoll.  His name appears in the Electoral Roll of 1958 living on Market Site.  This Frank died in 1993 aged 81 years.