John English.  Thomas’s brother, John, was born in Malmesbury in 1863.  He moved to Thornbury after the 1881 census which showed him living with his parents in Malmesbury and working as an apprentice butcher.

On 10th September 1887 in the Methodist Church, John (who had become a baker by this time) married a Thornbury girl, Lydia Thompson, the daughter of Charles Thompson, a tiler and plasterer and his wife, Lydia Thompson.  In 1891 John and Lydia English were living in Lower Bath Road, Thornbury (in a house which we think became number 1 Rock Street when house numbering was introduced in the 1950s).  John was a baker, presumably employed by his brother, Thomas.  He and Lydia had two sons, Wesley John aged 2, and Charles Elton Victor aged 10 months.
By 1901 the family had moved to 17 St John Street.  John was still a baker.  Living with them in the house were Lydia’s parents, Charles Thompson aged 80 and Lydia aged 79.  Both of them were born in Iron Acton.

Beatrice Phelps was born on 7th January 1870, the daughter of Robert and Eliza Phelps.  He was a groom at the time of Beatrice’s baptism, but in 1881 he was a barber and grocer in the High Street.  We think John and Beatrice had at least one child, Alan Arthur English was born 26 January 1904.  When he entered Council Upper School in 1911, his parent was shown as ‘Mrs English’.  John had died on October 10th 1910 aged 47 years.  He was buried in Thornbury Cemetery.  The 1911 Census shows Beatrice, as a widowed dressmaker, living in the house with Elton who was a house painter and Alan Arthur.  They also had one boarder, Elizabeth English, a widowed lacemaker aged 86 from Minchinhampton whom we believe to be the mother of her late husband.  Elizabeth died back in Malmesbury in 1916 aged 91.

The Electoral Registers show that Beatrice carried on living in the area until at least 1927.  The Thornbury Trade Directories list Beatrice as a dressmaker living in St John Street from 1914 up until 1931.

On September 7th 1935 the Gazette reported on the funeral at Thornbury Methodist Church of Beatrice Adelaide English the widow of John English.

The article described Mrs English as one of the oldest members of the Thornbury Methodist Church where she had been a Sunday School teacher.  It added that Mrs English had been staying at Rowley in Cam for some time and she had died there aged 65.  The mourners included her son, Alan English, and stepsons, Wesley and Elton English.

James English.  In 1903, there was a double wedding in Thornbury involving the above-named John and a James English.  We had initially assumed that James was John’s brother of that name, only to discover that he was already married, living elsewhere in the country and probably too old to sire a son, Leslie James, born in Thornbury in 1906.  We assume therefore James was the son of John’s brother, Charles.  This James was born in Malmesbury in 1876.  Charles was an agricultural labourer who was to stay living in Malmesbury, but James moved to Thornbury to join his three uncles already living in the area.

James married Hester Eliza Spill on January 19th 1903 in the Congregational Church in Thornbury.  They had a son in 1903 named Charles presumably after James’ father.  This son died in 1904 after only 4 months and is buried in the grave of Hester’s parents at Thornbury Cemetery. Hester Eliza Spill was baptised on 7th January 1877.  She was the daughter of George Joseph Spill, a labourer and his wife, Jane (nee Hinder) who came from Hawkesbury Upton.

The 1905 and 1910 Rate Books show that James and Hester lived at number 4 Pullins Green.  We are told that the accounts book of Harry Burchell (who owned the six cottages on Pullins Green) for the period 1908 -1910 shows that ‘J. English’ was paying £2 rent per quarter.  The 1911 Census shows James was working as a baker aged 34.  He was living at 4 Pullins Green with his wife, Hester aged 35 and their son, Leslie James aged 4.  Hester’s brother, Samuel J. Spill was living with them as a boarder.  He was aged 29 and working as a general labourer.

The Council School records show that James was living in Pullins Green in 1914 when his son, Leslie English, started Upper School.  These records also show that Leslie (and presumably his family) left the district in 1915.  The 1918 Electoral Register shows that Hester’s brother, Samuel Spill was occupying this house, so we believe that he took it over after James and Hester left.

The photo above on the left shows James in 1912 when he was a member of the Thornbury Brotherhood. 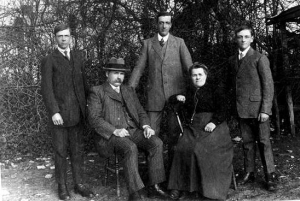 Arthur English.  Another brother of Thomas English, Arthur was born in Malmesbury in 1868.  The 1891 Census shows Arthur started work as a letter carrier.  He was living with his parents, Simon English, a labourer and his wife, Elizabeth in High Street, Malmesbury.  Arthur married Sarah Ann Lewis in 1894.  The two of them then moved to Gloucestershire where Arthur’s brother, Thomas and John were already living.  Arthur learned the bakery business from Thomas before setting up on his own account in Alveston at some time before 1901.  In 1901 Arthur was working as a baker and grocer in his own business.   The firm of ‘A. English and Sons’ continued operating from their shop up until at least 1973.  Arthur had three sons, Frank, Charles and John (known by the name of Jack when he started Council School in 1910).

Frank was born in 1895 and started at the Council Upper School in 1903, but he left here to join Miss Webb’s School in Alveston.  In the War he became a stretcher bearer and he came home with T.B. and died about 1920.

Charles and Jack also moved from the Council Upper School to Miss Webb’s at Alveston.  Charles had sons, Frank and Brian and died in 1954.  John had no children.