Boot and Shoe maker of Thornbury 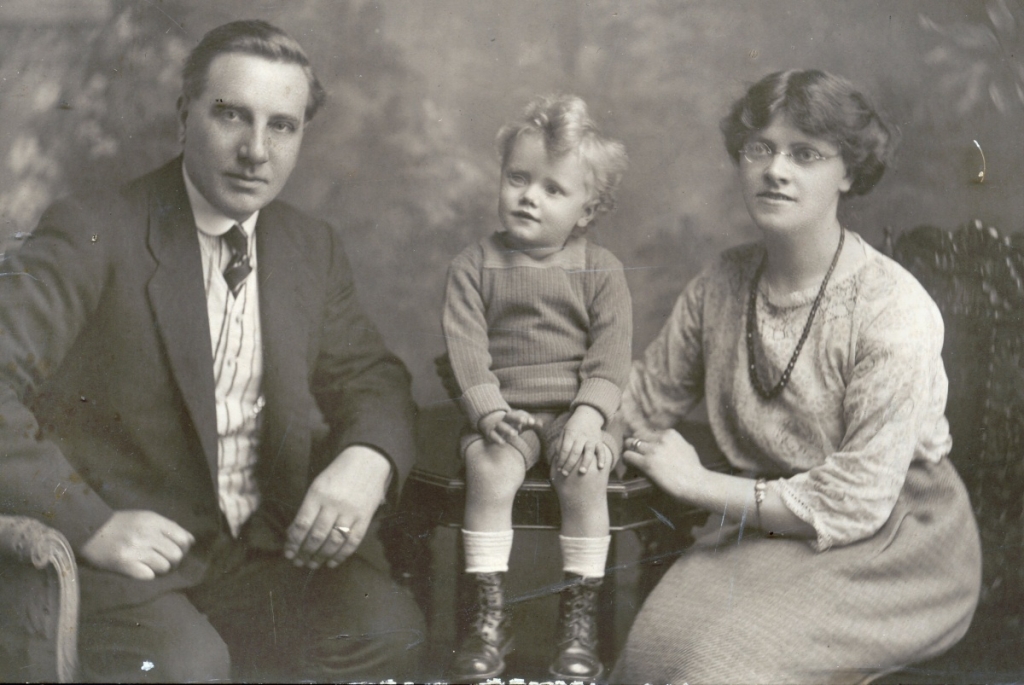 Alfred George Excell (see above) ran a shoe and boot making business in Thornbury, his wife, Edith Gladys and their son, George Alfred.  We are fortunate to have notes taken of an interview with their son, George, given to the Thornbury Oral History Society.  We have based our history of the family on these notes, supplemented by information taken from other sources.  Click here to read about George Excell

It appears that Alfred married in Gloucester in December quarter 1903.  His wife was Edith Adelaide Phillips.  The 1911 census suggests that they might have been living in Launceston, Cornwall.

We know from George’s interview that ‘My father spent most of his life in Canada; he was always interested in the shoe, trade and worked for the Moccasin Shoe Corporation.  He was invalided out of the army in 1917, met my mother in Shrewsbury Hospital where he was being cared for, and they married .. .. shortly after he was discharged‘.

The records of the Canadian Overseas Expeditionary Force confirm that Alfred enlisted on 12th February 1915.  The record shows that he was born in Gloucester on 20th September 1884 and that he was married and his wife’s name was Edith who was living at 229 Edmonton Street, Winnipeg, Alberta.  It described Alfred’s trade or calling as being a ‘batman’.  It also noted that he was aged 31, height 5ft 7 inches, chest 34 inches when fully expanded, fair complexion, blue eyes, auburn hair and Baptist religion.  We have been contacted by a person researching the Royal Flying Corps Training School at Henley and he informed us that Alfred was there as a batman possibly from January 1918 to January 1919.  The School was primarily concerned with teaching ground crew about rigging of aircraft, engine repairs and maintenance plus moving and storing of equipment. We don’t know what happened to Alfred’s first wife, Edith, but we assume she must have died.  In confirmation of George’s account, we did find that Alfred married again in Oswestry in September quarter 1918 when his wife was Edith Gladys Doody.  Edith was born in Oswestry in 1892.  She was the daughter of George A. Doody, an auctioneer.  The photo on the right shows that Edith was a nurse.

Alfred and Edith were living in Oswestry on 1st July 1919 when their son, George Alfred, was born.  They moved shortly after this to Teignmouth and in September 1923 they moved again, this time to Thornbury.  George recalled that the family moved from Teignmouth in Alfred’s own Model T Ford van.  George said that Alfred was an ambitious man and he wanted to set up his own business.  He bought a small boot and shoe business on The Plain (which later became known as  14 The Plain).

George recalled ‘There was no tap water, no proper sewerage, a man used to come round with a horse and cart on a Friday and collect, empty the toilets with a bucket having to walk, in most cases, through the house because back entrances were unheard of in poorer parts of the town.  No electricity.  Our lighting was gas, lighting and cooking was gas.  Water was obtained, for domestic purposes from a tank under the scullery through a hand pump and drinking water we had to take our buckets across the road to the mains water tap which had superseded the old hand pump.  Life was very much different, of course, than it was today, my mother was, of course, in the business with my father and I was brought up, well the majority of business houses had a maid to do the work and cooking and we were brought up, traders’ children were, you know, the responsibility of the maid as it were.  Which wasn’t always a success‘.

The 1925 Street Directory shows the house in which the Excells were living as being ‘Leicester House‘ in Castle Street.  We are fairly sure that this is the same house which later became 14 The Plain.  The 1925 Valuation lists and 1926 rate book show that Alfred was renting the property at 37 High Street from George Bernard Symes, in addition to the house he had bought in Castle Street.  We know from newspaper reports that George became a Committee member of Thornbury Football Club.

The business flourished and, some six years later, he bought the boot and shoe business at 37 High Street on the corner of Soaper’s Lane which had been run by A. C. Huins; George said that the building had previously been a soap factory.  Shortly afterwards Alfred opened the whole of the rear of the premises to repair shops as he had by that time gained contracts for the County Council, Tytherington Stone Quarry and several other industries for the supply of, what was then commonly worn, the hobnailed boot.  According to George’s interview the boot was popular both in agriculture and in the quarry work.  It was totally a leather boot with iron studs in the soles and heels and an iron tip.  Very hard – wearing and very suitable for that type of work.  The business flourished and he carried on until his retirement in 1954 when the business was bought by Thomas Ford.

The business employed as many as 18 to twenty people one time.  As well as making and repairing boots, Alfred also had a huge press and he cut sides of leather brought from the boats arriving at Avonmouth into soles and heels for the repair trade.  These were sold to other repairers and to customers who wanted the leather soles and heels and rubber heels and nails to do their own repairs at home.

It seems that Alfred kept the house and shop at 14 The Plain, although he eventually moved all his business to the 37 High Street premises.  The photograph on the left appeared in the Gazette in September 1937.  Mrs Dennis (on the right) and Mrs Excell (on the left) were part of the cup-winning Gloucestershire Women’s Bowls Team.  It appears that Alfred and Edith continued to live at The Plain until the early 1940’s when they moved to Alveston.  Alfred let the shop at The Plain to a variety of businesses, including the chemist, James William Austin Brookes and a wool shop run by Mrs Baron.  In the 1946 electrical register their son George and his wife were now living at The Plain house.  Both Alfred and Edith died in 1960.  Alfred was aged 75 and Edith aged 66.